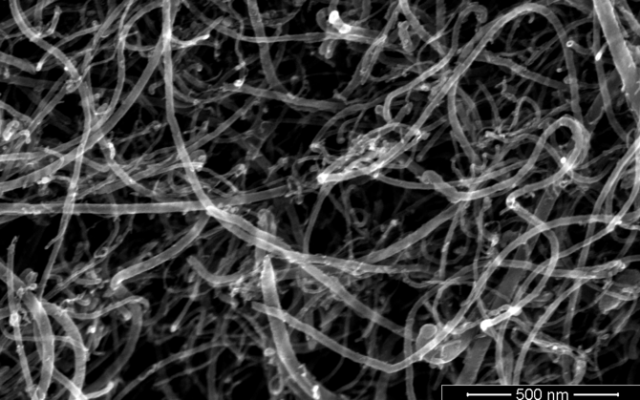 Master’s student in chemistry Sander Ratso has created an innovative technology, which, if taken into use, would undercut the price of overly expensive fuel cells. Tests conducted in Finland and the USA also confirm it to be a promising alternative. The innovative technology would help to lower the production costs of environmentally friendly electric vehicles considerably, and therefore, also their selling price. These types of cell elements can also be used, for example, in smartphones and laptops.

Toyota Mirai, Hyundai Nexo, and Honda Clarity Fuel Cell are examples of hydrogen fuel cell vehicles that are already used in many parts of the world. In the fuel cells of these vehicles, an extremely expensive platinum-based catalyst is used for acceleration of the chemical reaction.

It is possible that these and newer models will be cheaper in the future and drive around using lower-priced carbon nanotube catalysts created in Estonia.

Articles in high-level international scientific journals are usually a part of doctoral dissertations; however, Sander Ratso, a chemistry student at the University of Tartu, took his master’s thesis to that level. Furthermore, his development may solve a major problem the fuel cell industry is facing.

The results of Ratso’s master’s thesis have already been published in three international scientific journals, and his thesis won the first prize in the national student research competition last year.

The workgroup of Ratso’s supervisor in the Institute of Chemistry of the University of Tartu, Kaido Tammeveski, has achieved outstanding success in studying fuel cell catalysts. Over the last five years, the group has published nearly 50 scientific articles on this topic which have been cited by a number of peers all over the world.

It all started when Sander Ratso began to study the electrochemical reactions of oxygen for his master’s thesis (in Estonian). The reaction takes place on the low-temperature fuel cell cathode, i.e. the electrode of the chemical power cell.

This process is slow, and that is the main reason why the efficient and highly praised fuel cell has not become a mainstream product yet.

The low-temperature fuel cells need an electrocatalyst, i.e. material that increases the rate of the reaction. Currently, platinum is used as the catalyst. However, platinum is a precious metal in the same price range as gold, and that makes the price of the fuel cells very high.

The use of platinum entails another disadvantage. If the whole world started producing fuel elements of platinum, it would become highly complicated to get the metal in vast quantities. More than 80 percent of platinum in the world is found in the Bushveld region of South Africa, and a large part of the resources closest to the ground has already been mined.

In his master’s thesis, Ratso studied ways to substitute platinum. He chose carbon nanotubes doped with nitrogen and transition metals for that purpose.

“Carbon nanotubes are a form of carbon, similar to the widely known graphite,” Ratso explained. “While graphite has a planar structure composed of graphene layers, in carbon nanotubes the graphene sheets are rolled up. This way, tubes with the diameter of about twenty nanometres are formed.”

For making the catalyst, Sander Ratso used dicyandiamide as a source of nitrogen. This substance is also added to fertilizers and costs about a few euros per kilo. As a comparison, Ratso says that the price of an ounce, i.e. about 31.1 grams, of platinum is currently about 1000 dollars, and for one hydrogen vehicle fuel cell about 30–60 grams of this precious metal is needed.

If the innovative catalyst created by Tartu scientists reaches mass production, its price would be significantly lower than the price of those used so far.

Researchers there tested the inexpensive carbon nanotube catalyst in the currently used fuel cells and found that Ratso’s catalyst works as effectively as the expensive commercial platinum catalysts.

“Test results proved that it is a promising alternative to those,” Ratso said.

He continues research on the carbon nanotubes as a PhD student, aiming to increase their catalytic activity to an even higher level than platinum’s. Besides that, he wants to improve the stability of carbon nanotubes, so that they could be actually taken into use as catalysts in fuel cells.