How does childhood stress influence the life of chicks? 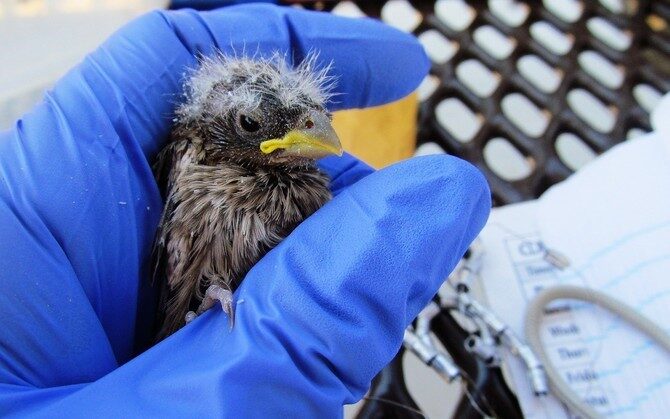 The feathers of a young house finch were used to measure the level of corticosterone, which indicates difficulties during childhood growth. Author/source: Tuul Sepp
Share

Childhood is the time for laying the foundations for the future and a difficult one could have an impact on the rest of the bird’s life. Tuul Sepp, a researcher  at the University of Tartu studied the impact of time spent in the nest on the later lives of house finches.

In the early stages of development, an organism needs energy and micronutrients to ensure the normal development of all organs and their functioning for the duration of its entire life. Childhood is the time for laying the foundations for the future and a difficulties experienced during early life could have an impact on the rest of the bird’s life. For example, hampered growth in an early age can cause problems, among other things, with the functioning of the immune system, which might cause the individual to suffer from diseases more often than usual, explains Marko Mägi, a research fellow of bird ecology at the University of Tartu, in the blog Linnuvaatleja (in Estonian).

The growth and development of chicks is not only stressful for the mature birds, who have to feed the hungry chicks, but also for the chicks, who are sensitive to all possible stress-inducing changes in the environmental conditions during this period of rapid growth. Rapid growth is necessary because the earlier the chicks leave the nest the smaller their chance of becoming a prey and thus the higher their chances of survival. The difficulties that a chick has to face during the rapid growth period can be seen in their feathers – the higher the stress levels in the organism or the worse the conditions the chick develops in, the more their feathers contain corticosterone, a hormone used as a stress indicator.

Together with her colleagues, Tuul Sepp, a researcher at the zoology department of the University of Tartu, studied how the conditions of house finches (Haemorhous mexicanus) in Arizona during the nesting period affected their condition in later life. For this, they collected feathers from young house finches before the first moulting and measured the amount of corticosterone in their feathers. They used these measurements to outline the conditions of the growth period in the nest. When the birds grew up, they were caught once more to measure the degree of intestinal parasite infection, the colour of their plumage and indicators of their immunity.

Surprisingly, none of the measured characteristics were related to the amount of the so-called childhood stress hormone. This might mean that the house finch chicks can overcome difficult growing conditions during their childhood and grow into fully functioning birds. These conclusions cannot, however, be taken too far, as the corticosterone stored in the feathers does not indicate short-term growth problems such as a temporary food shortage. However, it can be said that birds are physiologically able to quickly adapt to local environmental conditions and this ability is not dependent on difficulties experienced during childhood to the extent that might be expected.