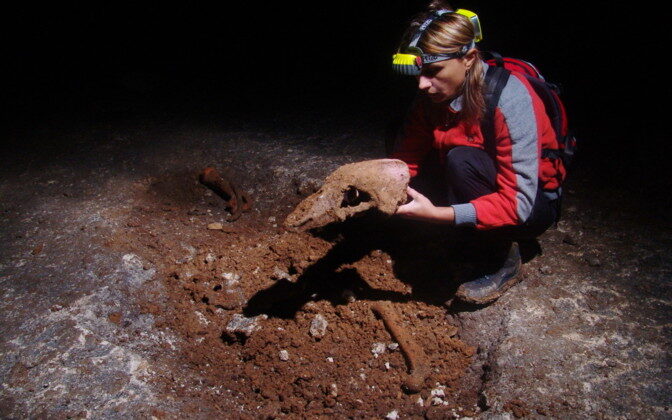 Skull of the cave bear. Cave bears were much larger than the present day brown bears. Author/Source: Andrei Posmoșanu
Share

Becoming extinct is irrevocable – most of us probably agree with that. Attempts have been made to revitalise species that were once lost, but these experiments have not succeeded. In their joint study, researchers from the University of Potsdam and the University of Tartu have found that part of the cave bears, more precisely some of their genes, still continue to live on within brown bears.

Recently, the scientific world was shocked by the news that some genes of the past Neanderthals and Denisovans still persist in modern humans because in the long-ago ice age, about 100,000 years ago, humans hybridized with other species of hominids. By now, researchers have discovered that something similar took place among bears too, as reported in the study introduced in the Nature Ecology & Evolution journal.

Within the project led by the University of Potsdam, in which researches from the University of Tartu also participated, the genome of modern brown bears and polar bears were compared with that of the closely related ancient samples of the cave bear and the brown bear. Cave bears, that became extinct 25,000 years ago, were large and clumsy bears that mostly lived on various plants. The analysis encompassed the samples from four cave bears that lived about 71,000 to 34,000 years ago.

“As the main outcome of the study, we have shown that brown bears and cave bears interbred. That means the cave bear is not entirely extinct but persists as a part of the brown bear genome”, said Peeter Anijalg, a PhD student at the Chair of Mammalogy, University of Tartu.

The cave bears, whose samples were analysed, once lived in Spain, Austria and Armenia. In addition, the tissue sample of an ancient brown bear (contemporary of cave bears) from Austria was involved. The samples of the cave bears’ DNA were compared with the samples of the modern brown bear, panda, polar bear and other bear species from all over the world. Two researchers from the University of Tartu with long-time experience in studying bears also participated in collecting and analysing the samples. The study revealed that over time, brown bears have interbred with cave bears and at least some parts of the cave bears’ genome can still be found in brown bears.

What happened tens of thousands of years ago?

“It is becoming more and more evident now that interbreeding between closely related species is relatively common. This is exemplified by hybrids of polar bears and brown bears that have been found in nature. Since the natural habitats of the brown bear and the now extinct cave bear overlapped and were closely related species, their hybridisation was not so unexpected,” explained the PhD student Peeter Anijalg and Research professor Urmas Saarma from the University of Tartu, who participated in the project.

At the same time, the zoologists at the University of Tartu continue their studies on ancient migration patterns of brown bears in Eurasia and North America that were caused by large climate changes.