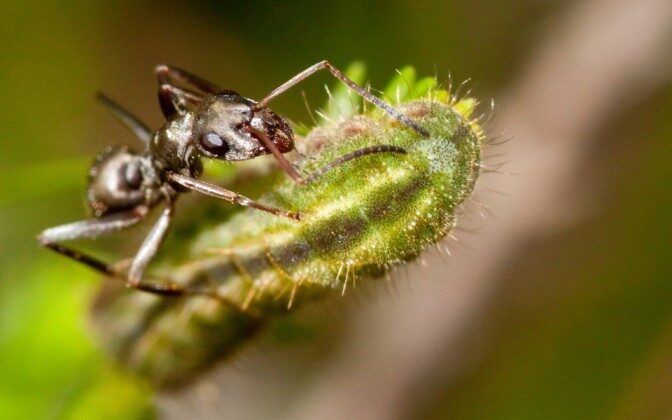 A Formica ant milking sweet nectar from a Plebejus idas caterpillar. Ants are willing to protect butterfly larvae for the sake of this juice. Author/source: Margus Vilbas
Share

Would you trust ants to raise your children? Beautiful small butterflies from the genus Maculinea do it and so, in the course of evolution, one of the weirdest forms of cohabitating species has developed – right here in Estonia.

Butterflies are disappearing globally, primarily due to the global climate change, land use intensification and cessation of traditional management practices. Although being one of the most studied insect groups in the world, there are species that are difficult to protect even in habitats seemingly suitable for them. This is probably due to the fact that some of them have managed to hide a special secret, vitally important for them.

The habitat requirements and distribution patterns of the myrmecophilous butterflies (i.e. they associate with ants) from the genus Maculinea were addressed in a doctoral thesis: “Biotic interactions affecting habitat use of myrmecophilous butterflies in Northern Europe”, defended recently in the Tartu University Institute of Ecology and Earth Sciences by Margus Vilbas, aiming to expand existing knowledge concerning the geographic variation of habitats of the endangered Maculinea butterflies to the northernmost populations known for these species. Particular emphasis was placed on identifying the host specificity of the studied butterflies.

Most of the lycaenid butterflies are myrmecophiles – at a certain period in their life (predominantly in their larval stages), they are associated with ants. The fundamental nature of these associations is that caterpillars provide ants with sugar-rich secretions in exchange for vital protection against predators and parasitoids. Most relationships are mutually beneficial, and the presence of ants is not essential for the survival of butterflies.

However, there are butterfly species for which ants are indispensable, so they cannot survive without certain ant species being present. Some of them(e.g. species from the genus Maculinea) are so specialized that after the time spent on the food plant they infiltrate into the ant nest where they continue to live as obligate parasites of ants. There also exist examples of generalist herbivores that are in obligate mutualistic relationships with specific host ants (e.g. species belonging to the genus Plebejus). In the colony, the caterpillars become social parasites of ants. While some species (e.g. Phengaris alcon) manipulate worker ants into feeding them, the others (e.g. P. arion) feed directly as predators of ants and their brood. Also, when staying in the colony, caterpillars keep providing ants with sugary nectar, in expectation of which the addicted worker ants carry out orders from their new masters (butterflies).

The secret life of Phengaris

They are in a hurry, as the lifespan of Maculinea adults does not last much longer than 3–4 days. Purple caterpillars hatch approximately one week later and start feeding on the flowers and seeds of the food plant. During about 2–3 weeks that caterpillars spend on the plant, they acquire only 1% of their final body mass!

After that, things get more interesting.. In particular, in the fourth (final) instar the caterpillars descend to the ground to wait for Myrmica worker ants to carry them into their colony. It is critical for the survival of the butterfly to end up in the colony of suitable host ant species! Namely, some of the Maculinea populations are extremely specific, being able to go through the life cycle only in the colonies of just one or few Myrmica species. Maculinea larvae use chemical mimicry to infiltrate into the ant society, preventing worker ants from distinguishing them from their own larvae.


In the colony, the larvae stay either 10 or 22 months due to their polymorphic growth, which means that part of them evolve into adults in one year, while the other part evolves in two years.

Larvae acquire more than 99% of their body weight when living in a colony. By the way, one small P. arion larva needs approximately 230 large Myrmica sabuleti caterpillars to reach the adult stage! Unfortunately, most of the Myrmica colonies are not large enough to raise even one P. arion individual to its adult stage. The situation is somewhat simpler for P. alcon as carrying capacities of Myrmica colonies for so called “cuckoo” species are generally higher due to their less harmful feeding strategy.

By exhausting the ants, the butterflies are putting themselves in danger

Numerous populations of Phengaris butterflies are suffering significant declines or have even gone to extinction due to their complex life cycle and susceptibility to environmental changes. For example, Phengaris arion is listed in the Estonian Red Data Book as “threatened”, while Phengaris alcon is the only ‘critically endangered’ butterfly species facing extinction in Estonia.

Two other obligately myrmecophilous butterfly species are known to be present in Estonia – Plebejus argus and P. idas. These two common lycaenids being abundant all over the country feed on numerous species and genera of food plants. However, they are unique among European Lepidoptera as they are the only known obligately myrmecophilous mutualists in the region. More precisely, caterpillars of P. argus are reported to exclusively associate with Lasius spp. while P. idas shows high specificity for Formica spp.

In conclusion, the simultaneous existence of two spatially overlapping resources – suitable food plants and ant species – has to be taken into account while planning conservation practices for obligately myrmecophilous butterflies. Moreover, specific interactions with ants are often a key factor to consider. Accordingly, not rare are the cases when population declines have resulted from the inappropriate management of otherwise healthy habitats.