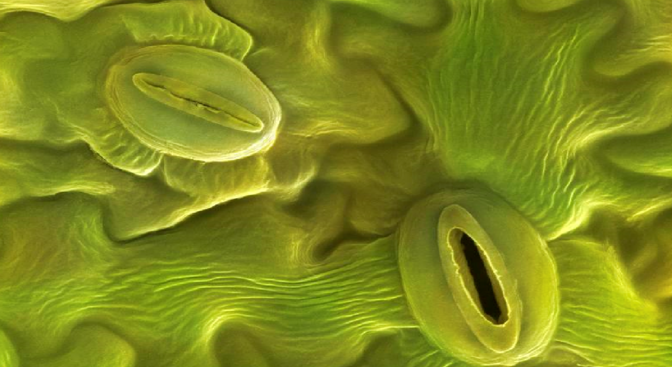 Closed and open stomata on the surface of a plant. Author: PS MicroGraphs
Share

Recent research by plant biologists at the University of Tartu explains why and when a plant opens or closes its mouth. This knowledge is important, e.g., for breeding crops with increased drought resistance.

The professor of molecular plant biology, Hannes Kollist, at the University of Tartu, together with his research group are studying how gas exchange, regulated by the opening and closing of stomata, takes place in the leaves of a plant. Stomata are like small “mouths” on the surface of a plant through which the plant absorbs carbon dioxide. The latter, in turn, is food for the plants and without photosynthesis, which also revolves around carbon dioxide, nothing much would function in the world.

Kollist and his co-authors have now described many important steps on how the stomata sense carbon dioxide. When the plant “is hungry” or the concentration of carbon dioxide decreases, it opens its stomata. Unfortunately, a lot of moisture escapes through the open stoma, which could mean that the plant will wilt in a drought.

“Plants must constantly analyse the information coming from the environment and from the leaves to solve the optimisation exercise – is it possible to maximise CO2 uptake, i.e., growth, or should water loss be minimised?” explained the first author of one the works, Kadri Tõldsepp.

Tartu plant biologists recently published two articles on this topic jointly with professor Julian Schroeder group from University of California, San Diego: one of them in  Proceedings of the American National Academy of Sciences (PNAS) and the other in the top plant biology journal The Plant Journal, where they explain what makes the plant open and close its stomata.

There is a plant hormone called abscisic acid, or ABA in short, which is mostly related to drought: in drought conditions, this hormone is responsible for how open or closed the stomata are. The published works describe where the ABA and carbon dioxide pathways diverge.

The article published in PNAS describes where the ABA and carbon dioxide pathways diverge.

The teams have been studying which genes and proteins regulate the opening and closing of stomata for ten years now. Research published in recent years has been the result of this lengthy work, and a patent application is being compiled on this research.

10 years of research can literally bear fruit in the future

In climate change conditions, more and more extreme conditions are occurring, like drought. This was also a problem during last summer, when the crop yields of Estonian farmers was reduced two to three times as the plants just closed their stomata and did not grow their ears as big as they could have done.

From the perspective of humans, it would be good if a plant, e.g., a crop could keep the stomata as open as possible during the growth of the ear, use as much carbon dioxide as possible in photosynthesis, and at the same time, be able to close their stomata during a drought to avoid desiccation. “In a future climate, these plants would cope better,” explained Kollist. Kollist’s research group has been working for ten years to make breeding such plants possible in the future.

Back then, research started with scientists studying the behaviour of natural plant forms in stress conditions.

“We found a plant line from Cape Verde Islands which differed from others in terms of having its stomata more open, and not closing normally when exposed to carbon dioxide. After that, it took us ten years of genetic, molecular-biologic and biochemical experiments until we could understand how this single nucleotide mutation affected the way a plant regulates its water usage when the concentration of carbon dioxide changes,” explained Kollist.

Kollist’s and Schroeder research teams have also prepared a patent application for the main results of the studies conducted during this time period. Currently, work is being done to try and see if the same can be applied to tomato and rice plants. “And if we’re successful, it could also be used in plant breeding.”

Therefore, as a result of the work done by scientists at the University of Tartu, fields for example could be sown with crops which can keep their stomata open and take in carbon dioxide during the development of the ear, but keep their stomata closed during a drought to protect themselves against it.