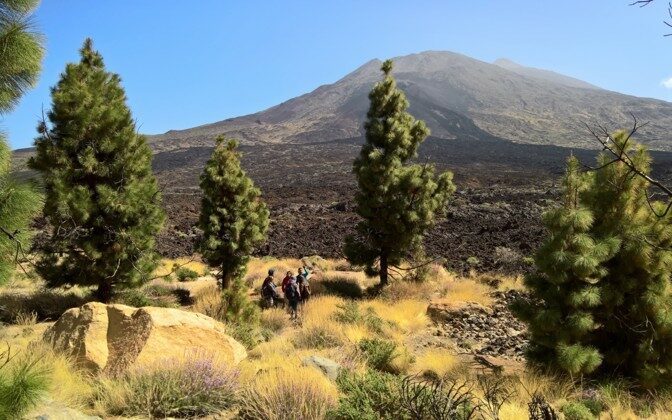 Volcanic islands offer a great opportunity for studying how the initially completely lifeless islands are populated by plant and animal species. The photo shows the lava fields in Tenerife that have not been populated by pine forests or herbaceous plants yet. Author/source: Madli Jõks
Share

Volcanic islands rise from the sea lifeless. Since the time of Charles Darwin’s expeditions, scientists have tried to determine how such islands are populated by plant, fungal and animal species and why the island biota is so different from continental biota. Botanists at the University of Tartu used computer simulations to solve this mystery.

Volcanic islands rise from the sea empty and thus offer a possibility to study the arrival of plant and animal species to the islands from the continent and to younger islands from older ones. Furthermore, on the isolated oceanic islands, a lot of plant and animal species have developed that cannot be found anywhere else in the world. Often, the island plants or animals are smaller or bigger or have different behaviour than their relatives living on the continent. At the same time, oceanic islands also need attention in terms of nature conservation, as communities that have developed in separation are often sensitive to human influence as well as alien species.

The particular characteristics of islands have attracted the interest of scientists for centuries. The famous natural scientists of the 19th century, including Charles Darwin, were inspired by the peculiarities of islands. Oceanic islands are the source for a large portion of important knowledge on evolution and the spread of species. However, even the experience in studying islands, which spans several hundred years, is too short for real-time monitoring of the occurring processes. This is why it is difficult to determine the reasons behind the peculiarities of the islands’ nature. With the development of computing power, a new method has come to the aid – computer simulations. These help to identify links between biodiversity and the processes shaping it.

Scientists Madli Jõks and Meelis Pärtel from the University of Tartu Botany Department used a simulation for studying the plant communities on the Hawaiian Islands, Galapagos Islands, Canary Islands, Cape Verde and the Azores. The simulation imitated the arrival of plants on the islands, their spread in the archipelago, competition between species, their evolution and extinction. In particular, the study looked at what factors influence the biodiversity and species’ composition of island plants, whether the size of the island and the number of varied habitats on the island are important, and what role the location of the island in the archipelago plays.

Computer simulations offer opportunities for research that cannot be done in nature, e.g., relocate islands within the archipelago. By changing the virtual maps of archipelagos, the simulations imitated realistic and less realistic conditions in which the biological diversity might have developed over millions of years. At the end of the simulation, the results were compared with the reality. It became apparent that the results were more realistic when the virtual islands contained many different habitats; scenarios where the islands were covered with one consistent habitat didn’t give results quite as accurate. From the results, it can be concluded that the diversity of the habitats has been a more important designer of island biodiversity than was previously assumed.

You would think that an island with many neighbours is more diverse than a solitary island, but isolated islands probably have more unique species. To test the importance of the spatial layout of islands, simulations were used where the islands were relocated in the archipelago at random. It was found that even though the right positioning of the islands was important for getting a realistic composition of species, surprisingly this was true for only three of the five archipelagos studied: the Hawaiian Islands, the Azores and the Canary Islands. Compared to the Galapagos Islands and Cape Verde, where islands are huddled together, these three have a relatively elongated shape. When the placement of islands in an elongated archipelago is changed randomly, the islands are likely to be further away from their actual neighbours, and islands which were initially further away will become their new neighbours. Therefore, the location of the island in the archipelago plays a significant role, especially with elongated archipelagos.

The simulation used is unique because instead of complex mathematical equations, simple rules were used, which applied to single plant populations. For example, what the probability is to spread, to be destroyed or to evolve into new species. As these simulations are more than an ordinary computer can handle, the help of the High Performance Computing Centre of the University of Tartu was used.

But why would you study oceanic islands in Estonia? As mentioned before, islands, especially oceanic islands, are primarily great model systems. Based on these, it is possible to discover patterns about how species spread between habitat spots or how they diverge due to geographic obstacles. This knowledge can be applied to the study and protection of other island-like communities, e.g., patches of forest left between clear-cut areas.

The study was supported by the Centre of Excellence EcolChange: Ecology of Global Change in Natural and Managed Ecosystems.