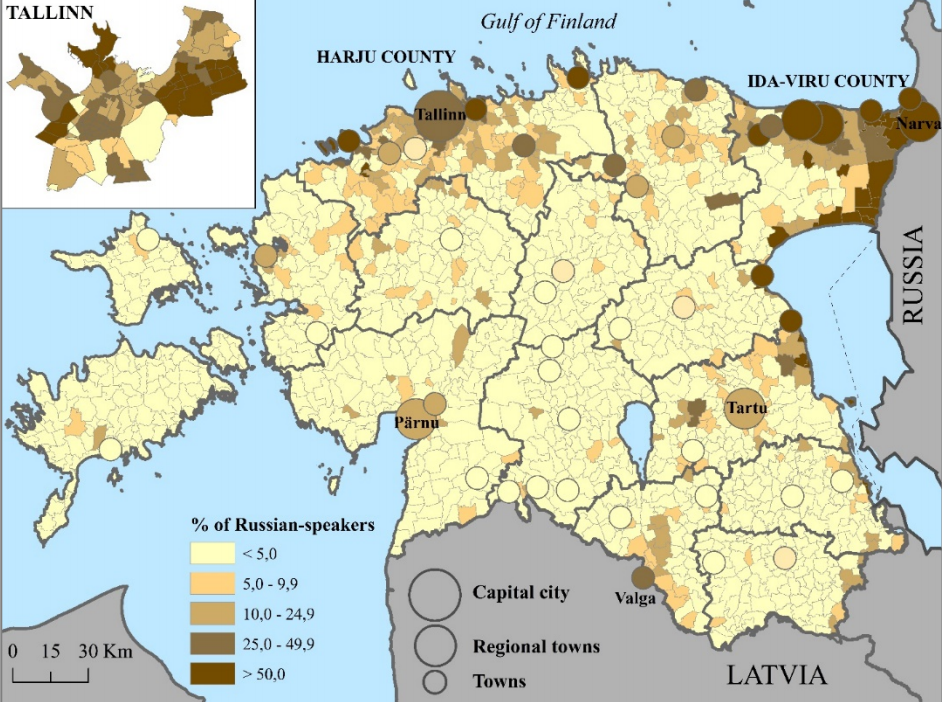 Percentage of Russian-speakers in Estonian rural and urban neighbourhoods
Share

This is also confirmed by Kadi Mägi’s doctoral thesis. The results of her study show that the high levels of ethnic residential segregation are very persistent and have even increased. The mobility behaviour of both Estonians and Russian-speakers has contributed to these trends.

“The Russian-speaking minority population has been relatively immobile within the last decades and their residential patterns are therefore largely similar to those developed in the Soviet period”, explained Mägi.

This does not mean that Russian-speakers do not migrate at all. However, when they do, they often choose a similar linguistic environment and they generally prefer to move to areas of panel housing which became characteristic to the language group already in the Soviet times. For Russian-speakers who move within Tallinn, the most significant destinations are Lasnamäe, Õismäe, Mustamäe and Pelguranna, for example.

In contrast, when Estonians change their place of residence, they move towards more Estonian residential environments. “Estonians only rarely move to neighbourhoods with a high share of Russian-speakers”, said Mägi, based on her study conducted between 2000 and 2011.

How does spatial division affect people?

Mägi’s research also shows that even though the Russian-speaking population has lived in Estonia for a long time, they strongly self-identify themselves as Russian and only a few of them equate themselves with the Estonian state and identify as Estonians. “Change in an individual’s ethnic identity is of course not a normative process and even the doctoral thesis has approached this as an indicator of integration”, said the junior research fellow in human geography, Kadi Mägi.

According to the young scientist, the research had an interesting result which showed that Estonians can change their ethnic identity as well. “There weren’t many but they were also heavily impacted by their immediate living environment. The Estonians and Estonian-speaking people who live in Russian-speaking neighbourhoods are most likely to change their ethnic identity to a Russian identity”, said Mägi.

This shows that when people are surrounded by representatives of another ethnicity, they might adopt their values, views and behaviours. Mägi’s doctoral thesis also confirms that in this case, the people can change their feelings on ethnic identity.

At the same time, she recognises that ethnic segregation is nothing new in Estonia; it’s meaning, however, has started to change in time.

This is a troubling trend which endangers the stability of cities and neighbourhoods. Especially vulnerable to these trends are the areas with panel housing. “When these used to be places of socio-economic mixing where Estonians and Russian-speakers would meet and mingle, now they are becoming increasingly Russian-speaking and the possibilities for interethnic communication are decreasing”, said Mägi.

In addition to this, Mägi is worried that people of higher socio-economic status are leaving such areas.

“Areas of panel housing will always remain an important part of the housing market and therefore these trends should be acknowledged more”, said Kadi Mägi. “Even though investments and efforts have been made to improve the quality of life in panel housing regions, these efforts do not seem to be enough to equalise the ongoing processes.”