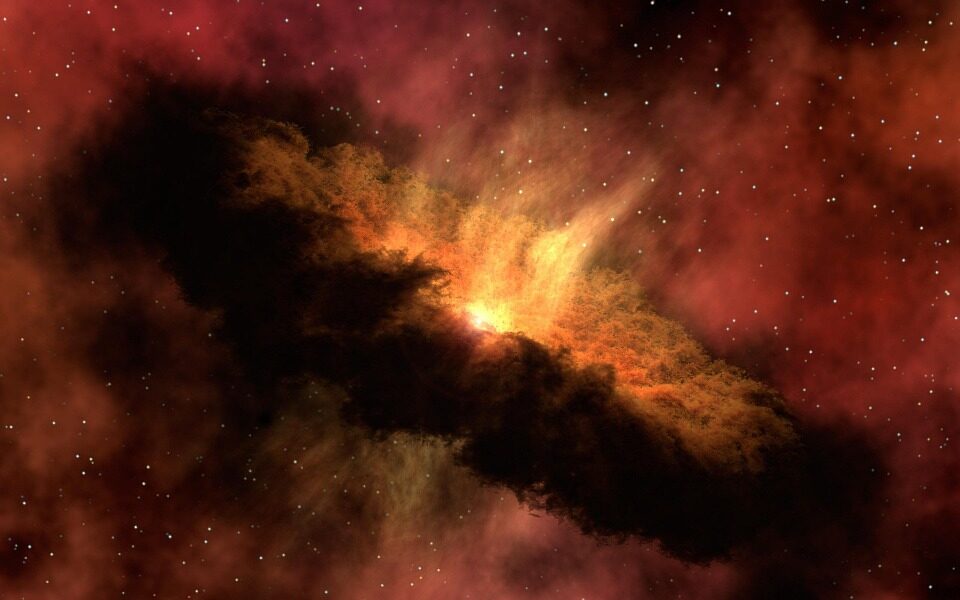 We live in the Milky Way galaxy that is like a bubbling cooker full of hydrogen. The stars are born and finally they explode as supernovae, mix gases and form gas clouds of different density. Urmas Haud, a research fellow at Tartu Observatory, can explain the processes taking place in our home galaxy.

“Mainly, the star formation processes are examined,” the research fellow of the Department of Physics of Galaxies and Cosmology, Urmas Haud, describes the everyday activity of scientists who study galaxies. “Gas forms a flat disc on the plane of the Milky Way and this is where the most important processes occur, like the formation of stars, for example. The stars finally explode as supernovae and due to these explosions, gas is scattered from some locations and accumulates in others. The result is unevenly distributed gas, which can be described as a set of clouds.”

The Milky Way galaxy is a spiral galaxy. Gas orbits around the centre of the galaxy – the longer the distance from the centre, the lower the gas density.

How well do we know our galaxy?

“By now, we have a general idea of it. Researchers are trying to find out what is going on within the gas. In some places, there is more gas and less in other places. Where there is more, the amount of gas will increase due to gravitation. When the gas accumulates and cools down, its density becomes higher and a gravitationally bound system develops from it – at first, the so-called protostar is born, which later evolves into a star. Depending on its mass, a star may evolve slowly – as the sun did in billions of years – or rapidly. A massive star reaches the end of its life-cycle within a hundred million years and then it explodes as a supernova. Every supernova enriches interstellar gas with heavier elements, but the force of explosion removes almost all gases from large areas surrounding the site of outburst,” describes Haud, regarding the processes taking place at a distance of light years.

Although Haud has studied the Milky Way galaxy since the early 1990s, his ideas became internationally acknowledged only recently and in recent years, the editorial board of the renowned scientific journal, Astronomy and Astrophysics, has marked out his articles twice.

An important research object is neutral hydrogen filling the galaxy

Hydrogen is the most widely spread element that fills the entire universe. Studying neutral hydrogen is extraordinary because in one of its radio frequency lines, the entire galaxy is nearly transparent and observable for researchers.

“Neutral hydrogen means that it is not ionised,” the researcher explains. “A hydrogen atom contains one proton and one electron. If hydrogen is ionised, there is only a proton. And why neutral hydrogen? Because of its extremely beneficial property: at radio frequency, it has a spectral line in which the whole galaxy is transparent. We can examine nearly any part of the galaxy, which is relatively uncommon.”

In his last published and recognised scientific paper, Urmas Haud focused on studying  neutral hydrogen within the entire sky. For a long time it has been believed that gas mainly exists in the galaxy in two forms: the cold phase (temperature up to 100 K or –173 °C), which is mainly assembled in dense clouds, and the warm phase (approximately 8000 K or 7,700 °C), which is distributed more evenly. In recent years, several reports have been presented – also by Urmas Haud and his German co-researchers – that suggest the existence of an intermediate phase, the so-called luke warm gas (approximately 3000 K or 2,700 °C). “In our last study we provided whole sky maps showing the distribution of these three gas phases and discussed their relation to interstellar dust. This has never been done before.”


How is the entire sky explored?

Space exploration is often based on large-scale international infrastructure projects. Most of the initial data gathered from the satellites and radio telescopes of the U.S. National Aeronautics and Space Administration (NASA) and the European Space Agency are available to everyone free of charge.

Neutral hydrogen is investigated by means of large radio telescopes that are located both in the southern and the northern hemispheres of the Earth. They operate like cameras with the lens of up to 100m in diameter and sensors of about 10 pixels. The larger the telescope, the better its resolution. Figuratively speaking, each line of sight of these telescopes passes the whole galaxy and records the total emission of gas clouds as a spectrum, which the researchers should then be able to interpret.

The sky is described with Gaussians

Here in Tõravere, describing the luke warm phase and determining the properties and distribution of all the three gas phases in the sky is based on the method revived by Urmas Haud – on Gaussians, which are mathematical functions used for describing the spectra of the hydrogen clouds in a galaxy. In recent years, the method has been internationally recognised because it provides an opportunity to assess the quality of surveys, to detect some problems with the observations and analyse, with some reservations, the structure of the gas in the line of sight of the telescope.

A Gaussian component is a bell-shaped function that should mathematically represent the shape of the spectral line of a single hydrogen cloud with ideal properties. In the 1950s, when the examination of neutral hydrogen in the star system started, it was assumed that all the gas in the Milky Way may be described as a set of such ideal clouds and the first observed spectra were presented as a sum of Gaussian components.

By the 1970s, however, the idea of this type of description was dropped. It was argued that there are no ideal hydrogen clouds in the galaxy that could be described by means of the Gaussian function and many features in the spectra may actually be caused by the aggregation of many clouds on a single line of sight. The mechanism seemed to be useless and in the interpretation of observations, the Gaussian curve fell into misuse.

“What happened in the 1970s was that the baby was thrown out with the bathwater. Indeed, the analysis did not serve its purpose as it was applied then but I came to think that in certain cases, this analysis might lead somewhere, so I started to warm the idea up again. It was already in the early 1990s,” explains Haud why he revived the method. “My idea was that if we view the galaxy with the telescope and see a number of hydrogen clouds simultaneously one behind the other, which are difficult to distinguish, it might be helpful to use several lines of sight. Looking in one direction, an edge of some cloud may be seen from behind the others, and in the other direction, part of another cloud can be seen. This way, the necessary additional information can be collected. The idea turned out to be worthwhile as the method gives employable results in 60% of all possible directions, and this is certainly better than no results at all.”

Urmas Haud went to the University of Bonn to test the method, using a computer programme written by himself and observational data provided by Dutch researchers, which were already being processed in Bonn. Rumours about an Estonian who had managed to make the forgotten method work spread fast. “For a week, I had no lunch,” laughs the researcher, “because they held mid-day seminars at the observatory: they all took their sandwiches there and one of them talked about the research being done. For a week, it was me who had to do the talking.”

Unfortunately, there was also some confrontation from scientists who denied the applicability of the method, and breaking the dogmas prevalent among astronomers took time. This is why the first results were not published until 2005. The breakthrough reminded that of a Hollywood film.

“At first, none of the journals accepted my papers. The editors did not believe that it was possible to get any results with this approach. Finally, after much effort and a number of discussions and argumentations with reviewers, my articles were published in Astronomy and Astrophysics. Soon they were also cited by other researchers.”

By now, the Estonian researcher has received a lot of favourable feedback from the international scientific community and editorial boards of scientific journals. At several universities, similar analytical software has been developed based on the results provided by Urmas Haud. For the researcher himself, the major gain is the revival and improvement of an old method. And it works, as the former opponents also admit.

Should we be worried about our existence?

Coming back to the bubbling galaxy and explosions of supernovae, we asked the researcher to assess the risk they pose to our existence on this planet.

“We have no reason to be worried here, on our planet, about the gas, because the density of hydrogen clouds is so low. The hydrogen clouds of high density contain up to 100 atoms in one cubic centimetre, which is almost like ideal vacuum. However, the explosion of some nearer star is not good at all. It triggers radiation: X-rays and gamma-rays. According to some hypotheses, the explosion of a nearby supernova caused the extinction of dinosaurs. We are unable to predict when to expect another burst. Moreover, considering the distances and the final propagation rate of radiation, it may already have happened and we are just not aware of it yet …”