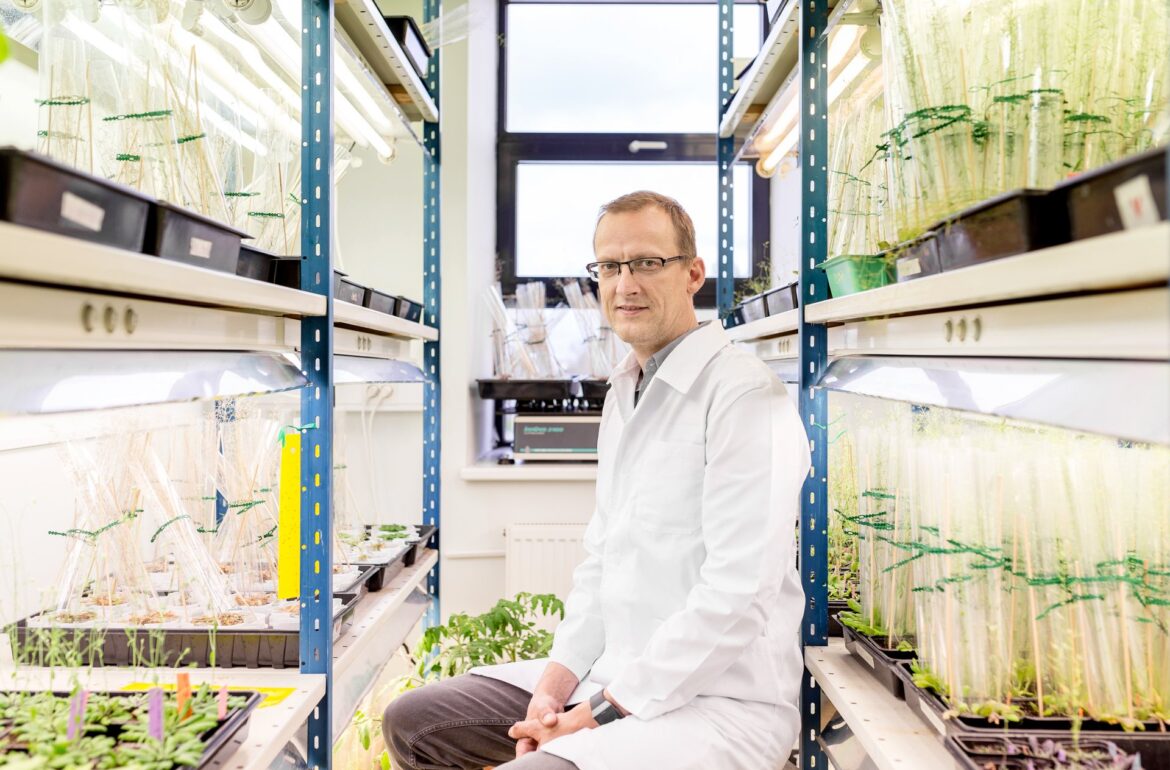 So as not to dry out in dry weather, a plant has to close the little “mouths” or stomata on its surface to control water loss. To the question, what makes the mouths of plants close in dry air, the plant biologists of the University of Tartu have an answer that has become a much-debated topic among scientists of this field.

Last January, the Plant Signal Research Group at the University of Tartu published an article in the Plant Physiology journal, which has become highly cited and is creating quite a lot of discussion. It is not very common for an article in this field to gather so many citations in scientific databases in a year (Web of Science’s 16, 28 citations in Google Scholar) and to earn the note “highly cited in the field”.

Why is this article the subject of so many conversations?

The lead author of the article, a senior research fellow in plant biology at the University of Tartu, Ebe Merilo, begins explaining from afar. Plants biosynthesise the stress hormone abscisic acid (ABA), which in the case of unfavourable conditions, such as water shortage in soil, triggers the signalling pathway activating stomata closure.

“Scientists still do not agree on whether the closing of stomata in dry air is also mediated by ABA or not,” said Merilo. This in itself is already amazing, considering that the first scientific articles on stomata were published in the 19th century and the role of ABA in the regulation of stomata has been known for about half a century.

“When the popular belief used to be that ABA participates in the closing of the stomata in dry air, our article then added evidence that there has to be something else in addition to ABA in this process. This ‘something else’ is most probably the hydropassive closure of stomata – a purely physical process that ensures the stomatal closure of the more primal plants, such as ferns, in dry air,” explained Merilo.

So far, it has been thought that the more advanced flowering plants have replaced hydropassive stomatal closure with the more efficient stomatal regulation in which the signalling pathways, such as the ABA’s pathway, play an important role. “Our results show that in a difficult situation, when a significant protein is missing in active signalling or the synthesis of ABA is inhibited, angiosperms also use hydropassive closure.”

This is why the article by plant physiologists from Tartu holds so much interest in its field, even though all scientists might not be in complete agreement. For example, an associate professor at the Purdue University in the USA, Scott McAdam, thinks that this is an important finding but needs more research.

In one of his latest articles, McAdam calls the research by Ebe Merilo and her colleagues a new theory. McAdam notes that this research indicates that there is more behind stomatal closure than only this stress hormone, and adds that this raises quite a lot of questions, especially about further research.

“When this article was published, it was undoubtedly an interesting discovery, I would even say it was controversial,” said Scott McAdam. His first thought was that more tests are needed, especially on plants growing in nature, because the experiments conducted by the scientists from Tartu used plants with extraordinary mutations and were carried out in a laboratory. However, even a year and a half after the article was published, McAdam finds that it is an important and progressive article. “We still do not know how the planet’s most important plants [angiosperms – Ed.] react to environmental conditions. Therefore, their results were extremely intriguing.”

Another reason why the data from the research conducted by plant physiologists of Tartu gives rise to a so-called new theory lies in the equipment. Namely, physicists have developed instruments specifically for the lab of Hannes Kollist, a plant biology professor at the University of Tartu, which enables to measure the gas exchange of the entire plant. Colleagues in other countries take measurements using commercial gas exchange systems, which usually analyse only a small area of a leaf.

Therefore, the lab at the Institute of Technology has equipment that is unique in the world, in part built using quite ordinary items from the kitchen, but which with its uniqueness and efficiency attracts scientists from other countries to conduct experiments here – during the visit of ERR Novaator, the lab was being used by a doctoral student from the University of Helsinki, Maitry Paul, for measurements on barley.

As the water management of a plant – starting from the roots, flowing along the vascular tissues and ending with stomata – forms a whole, measuring the entire plant gives important additional information. “When measuring with leaf chambers, such hydropassive responses might not be visible as the rest of the plant is in different conditions than the specific part enclosed in the chamber,” said Merilo.

All of this is of course basic research and one might ask, what use does it have in everyday life?

The first keyword is drought-resistant plants and this affects us especially acutely in relation to global warming. In warmer and droughtier weather, we need plant species that can survive and give crop in such conditions. That is why the Plant Signal Research Group’s lab collaborates closely with the Estonian Crop Research Institute in Jõgeva, in order to study how photosynthesis and stomatal opening are linked to crop yield.

For drought-resistance, it is necessary that stomata would be closed or would close quickly when the soil begins to dry. “However, for photosynthesis, the stomata should rather be open and the crops that feed people result from photosynthesis,” notes Merilo. For all of this, plant breeders need to know how and in what conditions plants open and close their stomata, and how the regulation of stomata affects crop.

In addition to supporting photosynthesis, the open stomata play an important role in cooling the leaves. For example, measurements taken on 5 June in Jõgeva showed that when the air temperature was 32 degrees Celsius, the average leaf temperature of winter wheat was 28 degrees.

“This cooling resulted from transpiration or plant evaporation and is very important because photosynthesis decreases at high temperatures. Thus, plant breeding will become more specific in the future and not only in terms of methodology, but also regionally. This ensures that the new breeds are the best fit for the given region’s climate.”

Scott McAdam points out that scientists do not yet understand how plants react to heat waves and high temperatures. “If we do not understand how plants react to extreme conditions, which are occurring ever more frequently, we will start seeing an extensive extinction of species. Therefore, I am very happy that this discovery was made now, as it shows how little we know about plant reactions.”

The Plant Signal Research Group at the University of Tartu is part of the Centre of Excellence in Molecular Cell Engineering.