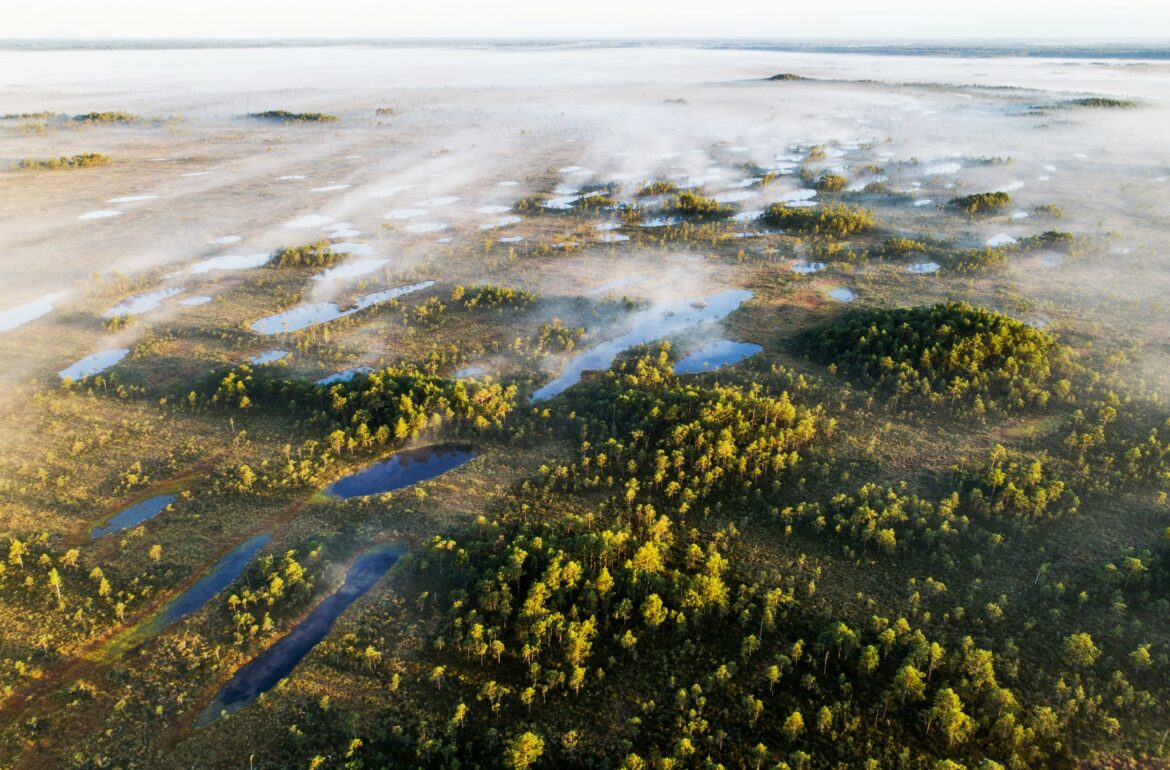 Drying of the surface layer of peatlands might be one of the reasons why Estonia’s natural bogs are becoming increasingly covered by pine trees. Photo credit: Karl Ander Adami.
Share

Peatlands bind 20% of all the carbon in terrestrial soils. In the context of climate change, it is therefore important to study the processes taking place in peatlands. Using testate amoebas, scientists found that the surface layer of most of the studied peatlands in Europe has dried significantly in the last couple of hundred years.

The reputable scientific journal Nature Geoscience published an article written in cooperation with Estonian scientists about the widespread drying of the top layer of European peatlands in recent centuries. Scientists from 12 countries studied the changes that have occurred in the moisture regime of 31 different types of mires in Europe over the last 2,000 years or so, and its possible causes and consequences. The Estonians participating in the study were the bog scientist Edgar Karofeld from the Institute of Ecology and Earth Sciences at the University of Tartu, and Ülle Sillasoo, who is currently working as a science teacher at Vaida Basic School.

Peatlands are important binders of CO2 and carbon sinks. Covering only about 3% of land in the world, they contain about 20% of all the carbon in soils. But the formation of peat can only continue in high‑water table conditions. As the water level lowers, peat begins to degrade and carbon is released into the atmosphere as carbon dioxide, affecting the carbon balance and climate of the entire planet.

As instrumental observations only date back slightly more than half a century (one of the longest records is from the Männikjärve bog, Estonia, since 1951), the scientists studied water level changes using testate amoebas living between mosses and in the top layer of peat because the amoebas’ species composition and abundance reacts quickly to changes in moisture. Thus, it is possible to reconstruct former moisture conditions on the basis of tests preserved in peat.

It was found that the surface layer of most of the studied peatlands had become significantly drier in the last couple of hundred years: between 1800 and 2000, 60% of the studied peatlands were drier than they have been for the last 600 years. Also, in the last two hundred years, 24% of peatlands have been drier than they have been for the entire 2,000-year period studied. As most of the peatlands had been affected by human activity to a greater or lesser extent, it is difficult to distinguish between the effects of climate change and human activity on peatland drying. However, changes have also occurred in natural bogs – in Estonia, this is reflected in the forestation of natural bogs.

Why should we care if peatlands dry?

According to Edgar Karofeld, a line might soon be crossed where instead of being carbon sinks, peatlands become CO2 sources. “This would have a great impact, because European peatlands, for example, contain about 5 times more carbon than forests, even though the impact of deforestation on carbon balance is mentioned more. Dried bogs cover about 0.3% of the planet’s land but emit about 6% of all anthropogenic CO2.

The peatlands that have been dried in Indonesia and Malaysia for growing oil palms and other cultivated plants have the largest negative impact: the degradation and burning of peat emits about the same amount of CO2 as the entire industrial sector of the USA.”

“The amount of CO2 released from Estonia’s dried bogs and peat production areas is second after the emissions from the oil shale industry and energetics but exceeds the emissions from means of transport severalfold. And yet, in order to decrease CO2 emissions, state support is given for buying electric cars (money goes out of the country), whereas by maintaining only 120–200 ha of cut-over peatland (money would stay in Estonia, our knowledge would increase and the country’s image would improve), the amount of CO2 not released from them would be comparable to the amount of CO2 presumably not released to the atmosphere by all of our electric cars (not taking into account the CO2 released by electricity production). When all electric cars need to be utilized every dozen years or so and a new one has to be purchased, then the positive effects of restoring a dried bog would increase in time,” concluded Karofeld.