Who is living in the depths of the North Sea? 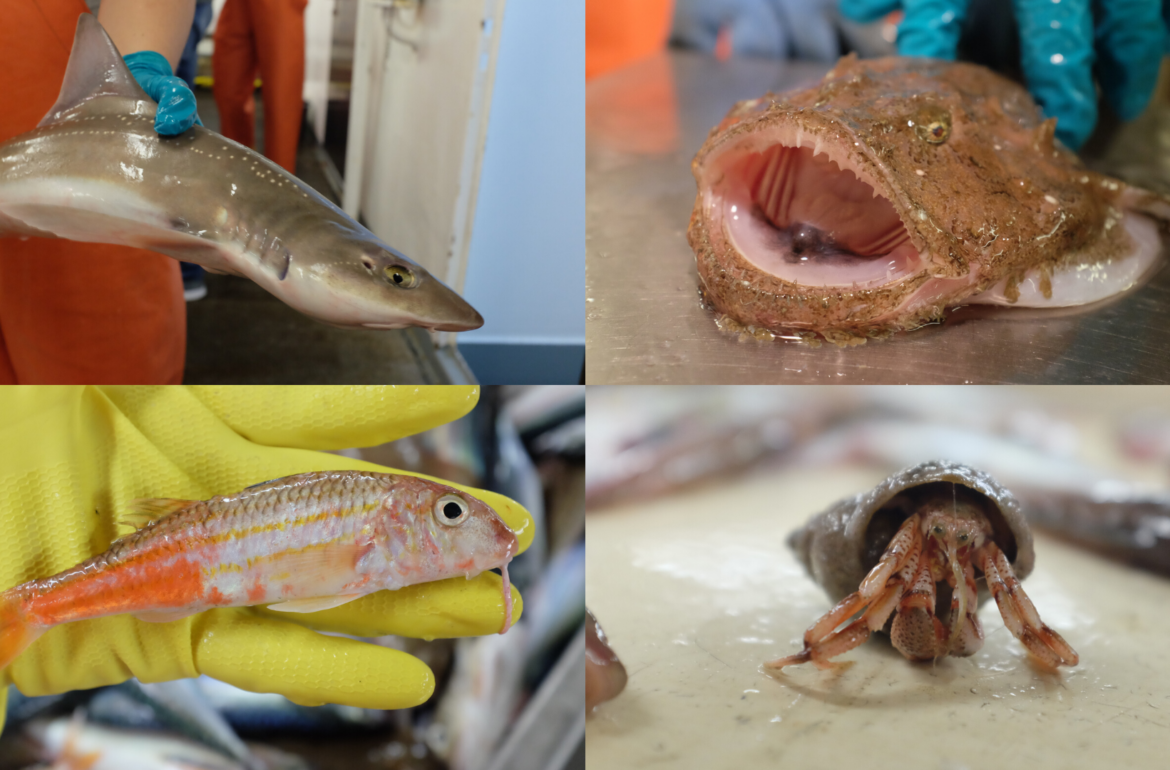 The depths of the North Sea are home to sharks, hermit crabs as well as fish never seen before (anglerfish and the striped red mullet). Photo credit: Randel Kreitsberg.
Share

Even though the North Sea is close by, its fish fauna is completely different from that of the Baltic Sea. Crabs, starfish, sharks and rays are common inhabitants of the North Sea, and with the first trawlfuls, it is hard to fathom the diversity. Take a closer look!

We will introduce these exotic neighbours and see what ichthyologists do on board a research ship. Randel Kreitsberg, a research fellow at the Estonian University of Life Sciences and a research communication specialist at the University of Tartu, gives an insider’s view.

At first glance, the research vessel Walther Herwig III of the German Thünen Institute is an ordinary 60-metre fishing trawler of 3,000 gross tonnes. However, looking inside the ship, it is obvious that it has been built specifically for making science. As the number in the name of the ship indicates, its predecessors were also named in honour of the founder of ichthyology in Germany, Walther Herwig. The fourth updated model is currently being built.

To study fish with a ship, you obviously have to catch the fish. For that purpose, the ship is equipped with bottom trawls as well as pelagic trawls, and with everything needed for working with them. The ship also has semi-automatic submarines, probes, systems for collecting water, plankton and bottom samples, several research labs, conditions fit for working with live fish and much more – even a sauna and a gym for a more comfortable stay. The ship has a professional crew of seamen, who steer the ship and catch the fish – the scientists wait in the cargo hold for the contents of the trawl to be released into the belly of the ship, where it is distributed between work desks by belts. Every year, the ship conducts maritime surveillance projects for the Thünen Institute on the Baltic Sea, the North Sea and sometimes also on the Atlantic Ocean. It was within one of these, that I spent two weeks on the North Sea.

My own aim was to collect samples of our flounder or the European flounder (Platichthys flesus) and the common dab (Limanda limanda) in order to later study the tumours found in the fish, other damage caused by sea pollution and adaptations for coping with these. For this, we collected blood, liver, bile and spleen samples from the fish, we looked for liver and skin tumours (which we found in an unbelievable amount), but during this time, I of course also tried to learn as much as I could about this body of water and its fish fauna.

The North Sea is a shallow sea (predominantly below 200 metres, but in places also only 20–40 metres, e.g., on the large Dogger Bank in the middle of the North Sea, which is rich in fish) located on the continental shelf, but with a salinity similar to that of the ocean. The North Sea is actively used by people, and thus, the condition of the sea needs to be under constant surveillance. There are large oil and natural gas deposits under the sea and of course many drilling rigs extracting these resources. Furthermore, an extremely active vessel traffic, fishing load, long-term pollution flowing to the sea from the rivers of Western European countries, but also chemical weapons and other ammunition submerged in the sea – there are more than enough things for scientists to study.

Fish of the North Sea

However, there is quite a big difference between the fish fauna on the coast of Germany and Denmark and the fish fauna on the coast of England. When on the coast of Denmark, a large portion of the trawl is filled with the familiar Atlantic mackerel, common dab and sprat (true, in addition to these, also whiting (Merlangius merlangus), edible crab (Cancer pagurus), red gurnard (Chelidonichthys cuculus) and other occasional colourful visitors) –  then in the northern part of the North Sea, the variation is much larger.

The salty sea is a diverse and exciting place to explore. Every fish is different, depending on their lifestyle, habitat and nutritional peculiarities – they are colourful, and in addition to fish, the trawl net catches several different crabs, starfish, squids, lobsters and stinging jellyfish. Pretty impressive!

The weather on the North Sea was unbelievably calm this time. On my last trip over the North Sea in July of last year, we had 6- to 7‑metre waves and winds reaching 24 m/s. So, this year, I carefully packed all my storm gear again. I remember debating whether I should bring woolly socks or not. However, the sea greeted us with 25 degrees Celsius, sunshine, and generally still waters.

Imagine a large ship in the middle of the North Sea without any land visible in any direction for a couple of hundred miles, water smooth as glass. At the same time, the sailors bring out their rods and reels from their cabins (why didn’t anyone tell me to bring my gear?) and start catching mackerels from the back of the ship with classic Norwegian tackle, 2 to 3 fish at a time, until half a case is full. Add the fish caught during the day by trawl and the cooks have their hands full. They start up the smoking oven at the stern of the ship – warm smoked mackerel is served for dinner.

Before boarding the ship, I was afraid that German regulations might not allow us to eat the fish caught for research (some kind of health regulations and what not…), but luckily this was not the case. After each trawl, a portion of various fish was cleaned, some for eating the same night (like a few dozen kilos of deep fried squids or boiled langoustines), some for the festive fish party held on the last night of the trip, where we could taste all the various species of fish caught at sea.

Research on the North Sea

The ship was big and carried, in total, a few dozen scientists, technicians and students, many of whom had their own research topics they were gathering samples for – I didn’t manage to fully understand the content of all of them by the end. However, the entire trip was mainly organised for the annual surveillance of the fish fauna – every year, the same places are visited, trawling fish, studying the composition of the fish fauna, fish parasites, general health, diet, the gender- and age-specific structure of populations – to find out whether fish is present, which species are abundant, which are not, and how sustainable the populations are. The scientific activity was led by an old acquaintance of mine from an earlier joint research project – a professor at Thünen Institute, Thomas Lang.

In addition to extensive surveillance, there were a number of smaller studies people were conducting for their own projects or theses. Someone studied plastic pollution at the bottom of the sea (specifically larger or so-called macroplastics), the presence of radioactive substances (e.g., cesium) in fish, fish parasites and diseases, samples were also gathered for zoology lectures and for the natural history museum.

Apart from me, there was only one more foreign guest aboard – a master’s student from Austria. So, by the end of the two weeks in a purely German speaking environment, even I managed to put together a word or two in German.

I got all my fish samples, and in the following months, we will analyse the various tissues to find out how fish are fighting the development of tumours in a polluted environment, and whether by battling the pollution from generation to generation, they have developed any sophisticated evolutionary genetic mechanisms to prevent developing cancer. For this, we are studying the cancer cells we found in liver tissues at the laboratories of the University of Tartu and the Estonian University of Life Sciences, analysing the extent of damage inflicted by pollution to the health of the fish and looking for genetic adaptations. Who knows, perhaps fish have figured out a clever trick for coping with cancerous tumours… True, looking at the tumours found on their skin and liver, this function, if present, is clearly not working in some fish.


In any case, for a fish lover, a fishing trawler is an extremely good means of getting to know the fish fauna of the North Sea. On this trip, I got to know dozens of species new to me, and when with the first trawlful of fish I had to ask the others to identity each fish different from the mackerel, then by the end of the trip, I was able to become a valued team member on the sorting line.