Paleoecologists: biodiversity is an insurance policy for the future of mankind 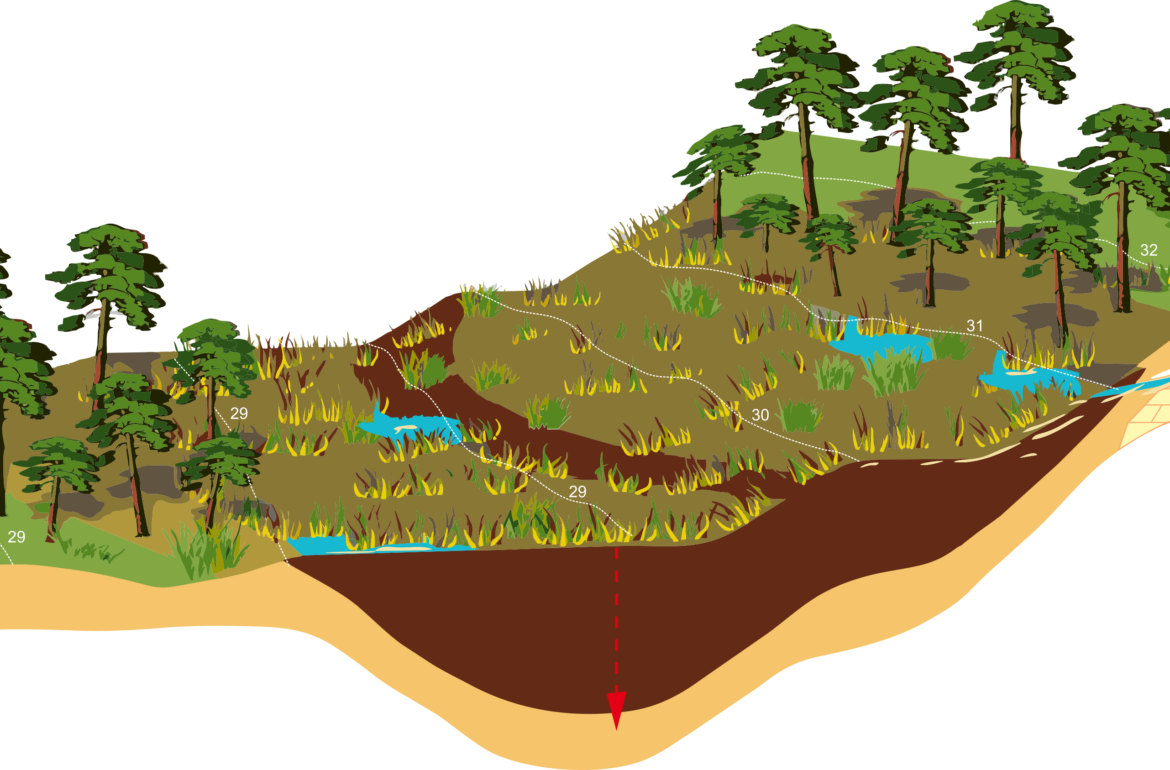 Kanna spring fen on the slope of Saaremaa upland, red arrow marks the location of the sediment core. Author: A. Blaus
Share

Fens and bogs are valuable research environments for paleoecologists due to ancient fossils that have survived in the peatland for thousands of years. A recent study carried out by the paleoecologists of Tallinn University of Technology reveals that the rich biodiversity of spring fens is a result of their millenniums-long stable environment. The continuously high local richness in spring fens is contrary to the general decrease in biodiversity around the world caused by increasingly intensive land use.

The study of bogs and fens carried by Estonian scientists is particularly valuable because in most parts of Europe they have been destroyed due to rapid industrialization and agricultural development. The research group led by Triin Reitalu and PhD student Ansis Blaus from the Division of Quaternary Geology of TalTech Department of Geology studied one of the oldest fens in Estonia, the Kanna spring fen in Viidumäe nature reserve in Saaremaa. Spring fens cover only 0.02% of the area of Estonia, but their vegetation is unique – several orchids, Saaremaa yellow rattle, bird’s-eye primrose and a number of other rare plant species grow in spring fens. Approximately 60% of the area of spring fens is protected under the Nature Conservation Act.

“Spring fens are a rare type of wetlands, where water flows constantly due to pressurised groundwater inflow. The Kanna spring fen is located at the foot of the Saaremaa upland and the water flowing down the slopes of calcareous moraine makes the fen environment unique,” Triin Reitalu says. Such calcareous soils create good conditions for diversity of vegetation.

“In our study, we travel 9,200 years back in time – to the time when the current fen emerged from the sea in the Baltic basin and, for the first 2,000 years, developed as a small bog between dunes. Peat mosses, heather, ledum and gale grew there. From then on, about 7,000 years ago, the bog developed into a spring fen due to water flow,” Reitalu explains. During that period, the climate had become not only warmer but also dryer after the last Ice Age, which in turn led to increased role of mineral-rich surface water that started to flow from the slopes.

The scientists used peat core analysis as a research method. For this, a 2.3 m long peat core was obtained from the fen and was analysed at a laboratory. The peat soils of spring fens develop very slowly, so this 2.3 meters long drilled core covers the natural history of the past 9,200 years.

Plant micro- and macrofossils analyses were carried out in the study. The microfossils studied included pollen and spores. Although pollen is light and capable of flying long distances, it resists thousands of years because of its strong husks and is therefore good material for research. The macrofossils studied included various plant remains, seeds, bark pieces, etc. Macrofossils are less mobile than microfossils, but they give a picture of the plant community that grew locally in fen through the past.

The analyses indicate that vegetation diversity was the highest in Kanna spring fen and the surrounding area in the period from ca 7,500 to 400 cal BP. The last ca 400 years are, however, characterized by the decline of the number of broad-leaved tree species around the fen (limes, elms, hornbeams disappeared). Despite of some vegetation changes, the fen environment in Kanna has been relatively stable for the last 7,000 years.

Triin Reitalu says, “Due to their specific biota, spring fens have been in the focus of nature conservation for more than half a century. Our current research provides a unique picture of the development of spring fens over the last millennia. We can conclude that the present high diversity of the fen is a result of a long-term stable environment.”

“I would regard conservation of biodiversity an insurance policy for the survival of mankind,” Reitalu says. Take for example the trend of natural pollinators toward extinction: as is well known, the fruit trees in our gardens need pollinators (honeybees and bumble bees) for fructification. In the current era of monocultures, however, the bees are declining in abundance and the yield of fruit trees is therefore at risk. Preservation of a diverse range of natural and semi-natural communities in a landscape is the best way to ensure e.g. high yield from apple trees in our home gardens.

The TalTech Quaternary research group summarised their two-year study in the article “From bog to fen: palaeoecological reconstruction of the development of a calcareous spring fen on Saaremaa, Estonia” published in the journal Vegetation History and Archaeobotany.