University of Tartu researcher to study inequality in prehistoric Europe 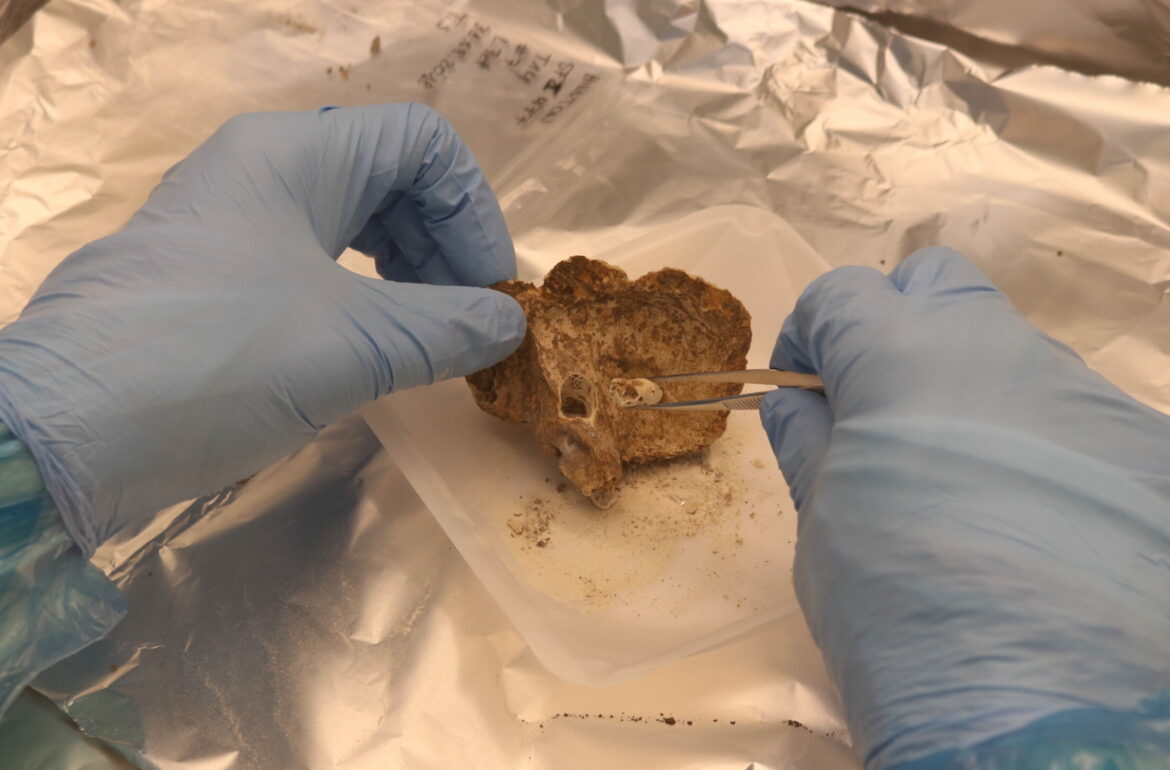 Bone sampling in ancient DNA laboratory in the Institute of Genomics of the University of Tartu. Photo credit: Samuel Griffith.
Share

To find out about politics and inequality in prehistoric Europe, the prominent European Research Council (ERC) awarded researchers of three countries with a grant of nearly two million euros in total. To obtain new information, the researchers will use novel research methods and thereby bring together ancient life and death.

The five-year research that received the grant from the European Research Council is led by John Robb, Professor of European Prehistory in the Department of Archaeology at the University of Cambridge.

Professor Robb’s project entitled “ANCESTORS – Making Ancestors: The Politics of Death in Prehistoric Europe” receives €1.94m in funding. The project takes the osteobiographical methods developed in the “After the Plague” project and the taphonomy methods developed in the Scaloria Cave project and applies them to a major theoretical problem in European prehistory – the nature of community and the rise of inequality.

John Robb says, ”This project is really exciting and I’ll be working with wonderful colleagues Dr Christiana ‘Freddi’ Scheib at the University of Tartu and Dr Mary Anne Tafuri at Sapienza University of Rome.”

Christiana Lyn Scheib, Senior Research Fellow of Ancient DNA in the Institute of Genomics of the University of Tartu, has nearly €700,000 at her disposal in the project. According to Scheib, the grant helps to study inequality in prehistoric Europe, which is necessary to understand how our distant ancestors lived and what kind of society they lived in. “It will give us information regarding how the organisation of society has changed over time.” Prehistory here denotes the period between the introduction of agriculture and the first written records.

In the course of the project the researchers analyse the DNA, skeletons and funeral customs of 400 people who lived in prehistoric times. The subjects of research come from three historical periods covering the Neolithic or the Later Stone Age (6000–4000 BC) and the periods from the end of the Stone Age to Early Bronze Age (4000–1800 BC) and from Intermediate Bronze Age to Iron Age (1800–600 BC).

“The results of the analysis enable us for the first time to estimate how inequality influenced prehistoric Europe and what the role of our ancestors was in it,” said Senior Research Fellow Scheib. “No research studies of this kind have ever been conducted,” she said.

Scheib explained that before the development of states, inequality did not depend so much on political power or wealth as on a variety of other factors. “Inequality may have existed in the entire prehistoric Europe, but this new perspective has never been empirically tested before,” she added.

Director of the Institute of Genomics Mait Metspalu said that the competition for ERC research grants is tough and the award of the grant is a major recognition for the University of Tartu and a significant event for the whole Estonia.

Metspalu considers this research important primarily because it takes a step further from the questions that have been asked in DNA research for some time already: where did a group of people come and where, with whom, and how much they mixed. Instead, this soon-to-start project raises the question how these people were doing and what their life was like. “It takes us closer to human understanding of those who lived in the prehistoric times,” Metspalu said.

So far, five researchers of the University of Tartu have received the grant of the European Research Council. Among them, Professor of Nanomedicine Tambet Teesalu has been awarded the grant twice. The first was the ERC starting grant (2012–2016), and the second was a proof of concept grant (2018–2019), which Teesalu used for commercialising the smart anticancer drug. Developed at the University of Tartu, this anticancer drug, when injected into blood vessels, will find cancer cells and leave healthy tissue unharmed.

The very first ERC grant in Estonia and the University of Tartu was awarded to Professor Lauri Mälksoo. From 2009–2019 he used the half-a-million euro grant for Russia studies. Mälksoo studied the effect of the decreasingly liberal government of the Russian Federation on the doctrine of international law and its application.

Mart Loog has used his ERC grant for developing the Centre for Synthetic Biology in the Institute of Technology of the University of Tartu, and his grant is ending this year.