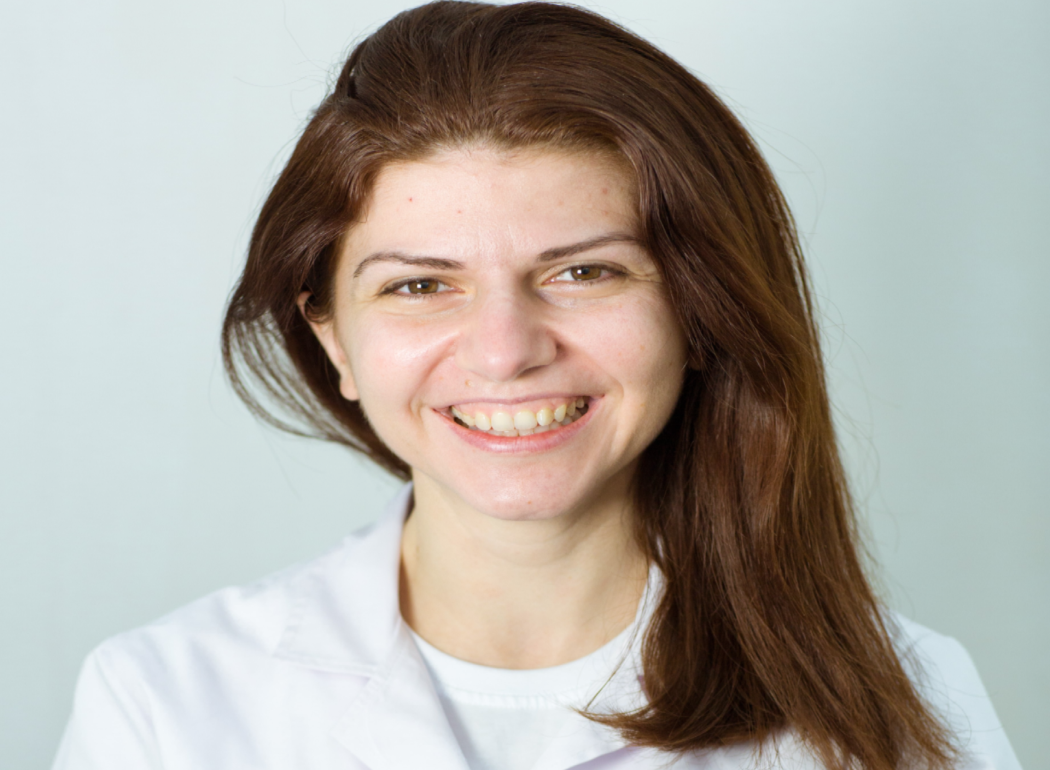 Bringing people together and conquering hardships is what Marina Aghayan, a material science researcher and entrepreneur, does the best. Photo credit: Raffi Youredjian
Share

Wars pushed entrepreneur and researcher Marina Aghayan to use material science to reach people – and space!

Bone substitution is an upcoming trend in medicine, especially in countries crippled by wars. Instead of removing parts of the body, implants are embedded within the broken area. It’s usually the last ray of hope for those seriously injured.

Not the most typical field for a young female scientist, but implants for injured soldiers is 34-year-old Marina Aghayan’s specialty. That, and overcoming obstacles with confidence.

In 2020, another armed conflict over the territory of Nagorno-Karabakh broke out between Azerbaijan and Armenia, who both claimed the mountainous land belongs to them. Thousands of soldiers died, many more were injured. The need for bone implants became immediately apparent.

Aghayan’s team started 3D printing the damaged bones to replace them with ceramic or metal structures. In time, the bone would then pass through the net structure and adjust to it. The team also tests new biodegradable materials that would eventually disappear from the patient’s body whilst their own bone grows and takes over.

They are supported by a Ukrainian company 3D Metal Tech that works with a local university and can print larger-scale implants if needed. The Ukrainian company’s CEO Yaroslav Holovenko once shared a lab with Aghayan in Tallinn University of Technology (TalTech). “She is really good at designing experiments and achieving her goals!” Holovenko said. “Aghayan creates communities around her wherever she goes.”

Even though the company was only founded in 2020, dozens of soldiers already have AIP’s artificial parts of bones in their bodies, helping them walk again.

The war brought Aghayan back home from Estonia, where she had already lived for almost a decade. She completed her PhD in Estonia, got married, had children, and kicked off companies.

What had brought her to Estonia in 2012 was a promise to a friend.

From research to startups

“If you will be accepted to Tallinn University of Technology, promise me you won’t refuse,” Aghayan’s friend told her when she was still back in Armenia, filling in applications for PhD positions.

“I know your supervisor. She will be good for you!” her friend insisted.

In her early 20s, Aghayan had just returned from Spain, where she had worked as a researcher in Professor Miguel Angel Rodríguez’s team at the Institute of Ceramics and Glasses for two years.

Together with colleagues she had published several academic papers in prestigious magazines like Ceramics International and Materials Science and Engineering.

“We published a paper every year – thanks to her!” her co-author Rodríguez recalls. “She’s extremely active in looking for collaborations and bringing people together.” After many years, they still collaborate on different projects.

As time passed, Aghayan began to become more interested in practical applications of material science rather than keeping the knowledge in the labs.

And where else to do that if not in Europe’s biggest startup hubs!?

Her future supervisor, Tallinn University of Technology professor Irina Hussainova, has received the highest Estonian science awards for her work on nanomaterials and technologies.

Aghayan packed her bags and flew to Estonia, keeping her promise. “Friendship is more important than anything else!” she said looking back laughing.

Even though the streets of Tallinn seemed gray and cold at first, this move set the ball rolling for her career in science and entrepreneurship. Irina Hussainova took the young and ambitious Armenian under her wing.

From science to business

When Aghayan arrived in Estonia, professor Hussainova gave Aghayan the freedom to explore where she could thrive.

“The best research supervisor is someone who doesn’t prevent you from doing anything, who doesn’t hold you back,” Aghayan said. Hussainova introduced her to new people and taught her how to present scientific projects in an easily understandable way.

Aghayan soon joined Hussainova’s team that turned CO2 into fuel by using innovative materials. The solution was later patented in Russia and in the European Union.

Within her first years in Estonia, Aghayan got married to an Estonian-born Armenian TalTech student and had children. Hussainova asked her if she was willing to continue, to which she said yes.

“I felt that I had to keep working,” she said.

Hussainova nudged her with care. Aghayan could use the lab by herself to be able to feed and put the children down to sleep without being disturbed. The supervisor invited her to give lectures during her childrens’ nap times. Aghayan would unapologetically bring a baby to meetings if she had to, changing diapers on the table whilst discussing research details. They always found a way.

“She was a supervisor of life!” Aghayan, now a mother of a seven- and an eight-year-old, exclaimed. She passes this on to her team members in Armenia, giving young mothers and their babies a separate room.

Aghayan: “I think women can do much more than men. We just need more courage and confidence!”

And overcoming obstacles with confidence is what this 34-year-old mother-of-two does the best.

After a few failed attempts, she now leads two startups, sharing her life between Armenia and Estonia. Besides AIP Tech, her co-founded Estonian company Fact Industries is cooperating with the European Space Agency, experimenting with new shapes and substances that can cool down faster as overheating is a major issue with powerful space technology. The team is renting a laboratory from Mektory, the innovation and entrepreneurship center at TalTech.

“To me, a scientist should feel responsibility towards humans and the earth,” Aghayan said.

She was born in an Armenian city Gyumri, which was demolished by the earthquake when she was only one. That catastrophe took the lives of over 25,000 people. Over half a million people lost their homes. “Half of my classmates didn’t have parents, so my parents taught me not to say mother and father outside home,” Aghayan said. Children injured themselves climbing over the ruins. Her classmate died falling from the roof.

As the Soviet Union dissolved in 1991, a war erupted between Armenia and Azerbaijan over Nagorno-Karabakh, some 30,000 people died. Aghayan’s parents fed the soldiers soup, who came for a warm shelter at their house.

After seeing despair and pain, Aghayan chose to help others through science. “I was taught that if you have something, share it with others.”

Chemistry wasn’t her strongest subject at school, but with the help of a patient teacher who assured her that she can be good at anything, things changed for the better. “Chemistry showed me that I can make a difference, “Aghayan said. “I can innovate something that can change lives.”

Aghayan was accepted to the A.B. Nalbandyan Institute of Chemical Physics in the capital Yerevan when she was only 15 years old. She quickly started working at the university’s lab.

After her Master’s studies in Armenia, she enrolled as a researcher at the Institute of Ceramics and Glasses in Madrid, but lost her grant. Aghayan had to survive on a very limited budget but nonetheless decided to pursue her studies. “I ate a lot of rice and bread,” she recalls. “I then understood how much science meant for me, because otherwise I wouldn’t have done it,” Aghayan said. “Scientists can overcome anything, especially women. I could focus on work even if the bombs would be blasting next to me. I learned to control my mind.”

As a young girl, she read studies on perseverance that helped her. There is scientific proof, she says, that if you feel like you cannot keep going, in fact, you still have twice as much energy left. “This is pure science!” Aghayan exclaims. “After reading such studies, you feel ashamed to give up!“