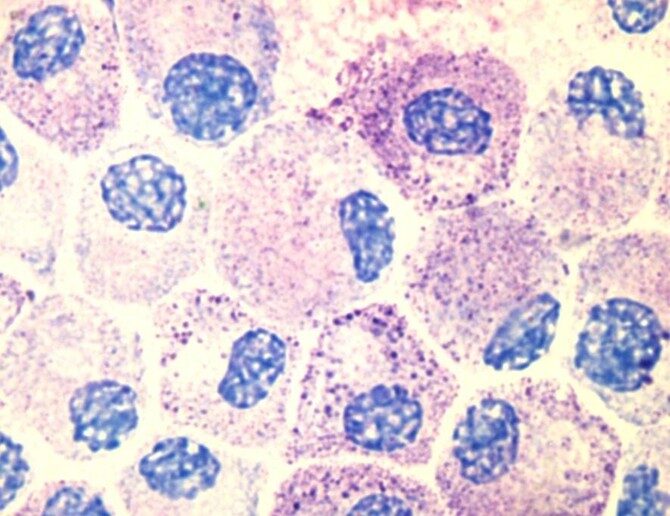 Mast cells may also be involved in infertility, since they are found at high numbers in the mucosal layer of the uterus, i.e. the endometrial tissue. Author: Kauczuk / Wikimedia Commons
Share

Pharmaceutical companies have an enormous interest in the testing of new candidate drugs on mast cells, which are responsible for causing severe allergies and asthma, although currently, there is no robust method for the rapid production and propagation of these cells.

However, Estonian researcher Mari-Liis Kauts, during her doctoral studies at University of Edinburgh, developed a method for successfully addressing this issue. The innovative approach has already piqued the interest of one of the world’s leading pharmaceutical companies, and Kauts’ Doctoral research supervisor Professor Elaine Dzierzak, has received a proof of concept research grant from the European Research Council (ERC) to further develop Kauts’ mast cell generation method.

Globally, 30 % of adults and 40 % of children suffer from allergies. Nearly 300 million people around the world suffer from asthma. For the pharmaceutical industry this means that in the case of allergy treatments the market value for antihistamines alone extends into billions of dollars.

Allergic reactions and asthma are caused by the activation of mast cells. Mast cells contain protease rich granules in their cytoplasm, that upn activation, release the proteases, such as histamine – the substance which directly causes the infection and/or shock accompanied by allergies. Hence, allergy medications are, for the most part, either mast cell stabilizers or antihistamines, i.e. they inhibit mast cell activation or the function of histamines.

An alternative method for generating mast cells, is their differentiation from stem cells. However, previously published protocols exploiting stem cell technology for mast cell production require at least 10-12 weeks of cell culture in the presence of growth factors, which are very expensive.

The innovative method developed by Dr. Kauts and Professor Dzierzak at University of Edinburgh, requires only 12 days of cell culture for obtaining functionally active mast cells that can be used for drug research. The robustness of the method makes it also very cost effective.

What is Kauts’ method based on?

The protocol relies on the use of an innovative reporter stem cell line generated at Professor Dzierzak’s laboratory, which enables the specific enrichment and subsequent isolation of highly proliferative mast cell progenitors. ‘This protocol helps to robustly produce biologically active mast cells in an unlimited quantity within a very short period of time.’

It is important to note that this approach offers also opportunities for the generation of mast cells from patients suffering from highly heterogenous mast cell disorders, thus opening the filed for personalized medicine and allowing for rare illnesses to be studied. For such patient specific applications, pluripotent stem cells are first generated from patient’s skin followed by their differentiation into mast cells.
‘Let us presume that there is a patient who is suffering from a rare mast cell disorder which there is no treatment for. In such case, it is possible to generate his/her-specific mast cells, that can then be used by pharmaceutical companies for testing various drug candidates, and to determine which of those will most effectively help that patient’, explained Kauts.

This is the reason why many pharmaceutical companies are interested in this method. For example, pharmaceutical manufacturer Bayer is the world’s fourth largest manufacturer of allergy medicines – antihistamines, to be precise. Bayer has shown interest in using the method developed by Kauts and Dzierzak for drug candidate screening applications.

Mari-Liis Kauts completed her Doctoral research at University of Edinburgh, although not precisely on the topic of mast cell generation, but on haematological regeneration. The project, which was awarded an ERC proof of concept grant, was born thanks to an unexpected discovery made outside of the thesis hypothesis, but has now a potential to take an enormous scope, scientifically as well as economically.

Mast cells may also be involved in infertility, since they are present in great numbers in the mucosal layer of the uterus, i.e. endometrial tissue. Working as a researcher at the Competence Centre on Health Technologies, Kauts continues to develop infertility treatment methods, and also contributes to the further advancements of the mast cell generation method in collaboration with Professor Dzierzak’s laboratory.

Money for growing billions of cells

With the help of the proof of concept grant from the European Research Council, or ERC, Kauts and Dzierzak are continuing to further develop the method allowing to rapidly produce billions of human mast cells for pharmaceutical industry drug discovery approaches.

In particular, the pharmaceutical industry is interested in obtaining as many cells as possible in the shortest period of time. Figuratively speaking, a pharma company would obtain a license or set up a collaboration in order to use the method for robustly producing hundreds of billions of mast cells on which they can test their potential drug candidates and advance allergy and asthma health care.

‘In terms of time, this is a question of a few years. We are able to produce human mast cells in a very short period of time, however, currently we are optimising the protocol in order to obtain an even larger quantity of cells and to demonstrate that they are biologically active’, explained Kauts.

At present, for this method a patent application has been filed, and the data will also soon be published in an international peer-reviewed journal. Mari-Liis Kauts is marked as the inventor on the patent, and will possibly retain the right to use the patent in the future under preferential terms. ‘If we are able to further optimise the protocol to rapidly obtain unlimited quantities of biologically active human mast cells, then there would be potential in establishing a collaborative project in Estonia, and perhaps, even setting up mast cell produciton here.’