The human eye can be trusted when assessing bird colouration 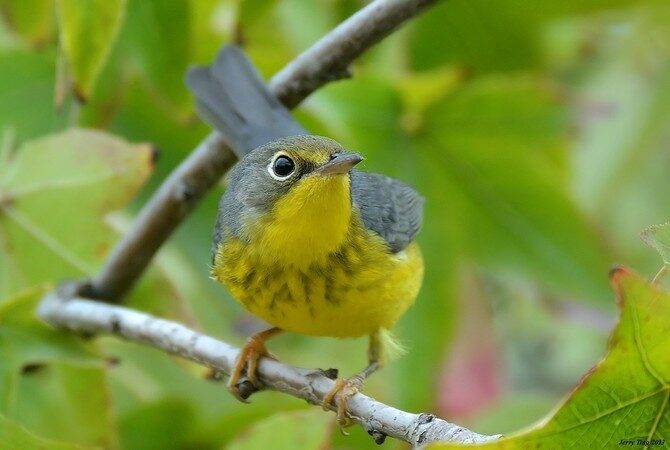 The Canada warbler (Cardellina canadensis) is one of the species whose plumage colour was studied. Author: Jerry Ting, Flickr.com
Share

Is seeing really believing? Many scientific studies looking at the colour of birds are based on human assessment, especially those where precise devices cannot be used for measurements.

We see the plumage of the great tit and the male golden oriole as strikingly yellow, the plumage of the male bullfinch and common rosefinch as red, and bird guides provide descriptions on the colours of different plumages with illustrations to confirm the descriptions. Human assessment has also been the basis for many scientific studies looking at the colour of birds, especially studies where precise devices could not be used for measurements and the principle of “seeing is believing” was relied upon. Based on the research cited in the Bird‑watcher’s blog, Marko Mägi, a bird ecologist at the University of Tartu, debates whether this is a valid approach.

Human vision differs from that of other vertebrates – humans cannot detect ultraviolet, infrared or polarized light. Therefore, the question remains as to whether the human eye can correctly distinguish the colour nuances in avian plumage and whether the colours on the illustrations in bird guides accompanying the descriptions of colour are reliable. Can the human eye accurately detect the colour nuances in avian plumage that could play a significant role in understanding the ecology of a species?

To examine human vision, researchers at the University of Illinois measured the colour parameters of the bird feathers in museum collections using a spectrophotometer. After that, they took photographs of the feathers in standard lighting conditions and measured the colours from digital photographs and from the illustrations of bird guides. The digital photographs and the illustrations are both highly human-biased; the sensors in cameras try to record an image identically to the way the human eye sees it by removing ultraviolet and infrared light and the illustrations in bird guides have been directly influenced by the eye of the artist.

In total, 73 different plumage elements were measured on 14 species with blue, red, yellow, brown, black, white and grey feathers. Even though the colours of the illustrations in bird guides differed significantly from real feathers, especially in the blue tones of the plumage, in overall terms of all measured colour parameters, the three different measurements gave relatively similar results. Consequently, we could say that, at least in the spectre of visible light, we perceive the colour nuances of avian plumage relatively accurately.

The human eye, however, is not accurate enough to draw conclusions on the colour of the plumage in connection with ecology, evolution and visual ecology. The success of an individual can be determined by the details in the colour of the plumage that the human eye cannot see. We do not know how the colours that are invisible to humans can affect mate selection, camouflaging and predation risks of birds or how the invisible colours change under various lighting conditions. However, all of these questions regarding visual ecology are important for understanding the role of colours in the development of intraspecies as well as interspecies relationships.