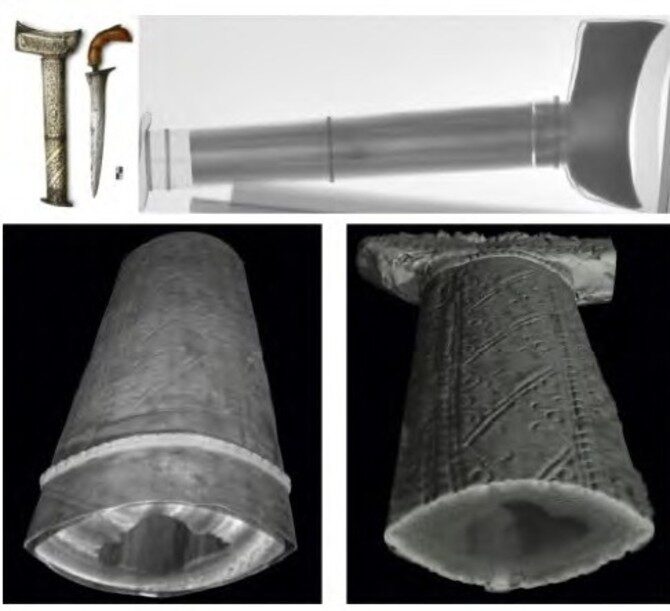 When photographing the sheath of an Indonesian dagger, the effect of the metal casing on the image of the wooden interior has been alleviated with the help of neutron scattering. Top left is the dagger and its sheath. Top right is the image taken with the neutron beam passing through the object. Bottom left and bottom right are 3D images taken with neutron radiation and X-radiation, respectively. Author: E.H. Lehmann, Paul Scherrer Institute
Share

Every day for the last two years, scientists at Tallinn University of Technology have been working on a device that is as important to the European Spallation Source in the city of Lund, Sweden as a tyre is to a car. This prototype is now ready and should the research centre put it into use, electromechanical technicians at TTÜ will have their hands full.

The European Spallation Source is the world’s most powerful research centre using neutron radiation. Its construction in Lund was begun four years ago by 15 European universities, Estonian universities included.

Neutron radiation can be used to photograph lighter atomic nuclei and, thus, to study the structure of materials. But before these studies can begin, a substantial amount of complex technology needs to be developed. The protons moving in the Lund accelerator are accelerated by an electric field.

This high-voltage pulsed power supply unit is the tyre for the car – it’s one part among many, but nevertheless, without it, the car would be pretty useless. “An important part of the pulsed power supply is the high-voltage pulse transformer, which turns a voltage of one kilovolt into ten kilovolts, thus increasing the voltage tenfold. And ten kilovolts is the medium voltage that is used in power networks, for example, for transporting electricity,” explained Heigo Mõlder, a research fellow at TTÜ.

The voltage which has been increased tenfold then moves into a voltage rectifier, where the AC voltage is turned into DC voltage. In the TTÜ laboratory, the DC voltage is then carried to a small test model, but in the Lund accelerator, it will move into vacuum tubes. From there, by means of various devices, a huge tungsten wheel is bombarded and neutrons scatter. These are the neutrons that make studying the properties of different substances possible.

The neutron radiation based on the spallation of atomic nuclei is produced as follows: First, an amount of hydrogen atoms is stripped of electrons and leaving only protons to remain. These protons, in a vacuum, are then accelerated in a changing electromagnetic field and after a couple-hundred-metre acceleration they hit the “target”.

In the Lund accelerator, for the first time, the “target” is a rotating tungsten wheel. When hit with the protons, the nuclei of the tungsten fall apart and a large amount of neutrons scatter. These neutrons are slowed down and directed to measuring instruments of various functions. Based on the readings from the detectors of the measuring instruments, an image or other data, which is the output of the corresponding measuring instrument, is calculated at the computing centre.

Materials technology, biology, green technology, environment, drug design, biotechnology and medicine are the fields listed by Tanel Jalakas, a senior research fellow at TUT, in which neutron radiation can be used for research.

According to Jalakas, this device is unique because it combines various technical solutions that have never been used in this way before. It’s not easy to build such a device because limited funds must procure the best materials and produce the best solutions.

Jalakas uses a component of the machine as an example of something that required a special solution. The high-quality material and solution offered by Germany might have been suitable; however, it cost €24,000. China offered the same solution for €3,000 but, as it later turned out, of poorer quality. Eventually, a solution with the best cost/quality ratio was found in the USA.

Making these decisions also took considerable time and effort, which meant that the completion of the device took a year longer than initially expected.

At present, the documents for the prototype of the unique high-voltage pulsed power supply unit by the TUT scientists have been sent to the Lund accelerator and all that remains is to wait and see whether this prototype will be selected and put into operation.

If it is chosen, they will need tens of these devices. What happens then? “Then we get lots of money,” jokes Heigo Mõlder. Tanel Jalakas affirms earnestly that they are ready to make more of them, as now it would be significantly easier than when developing the prototype.

The first neutrons are hoped to be beamed out by 2019. Thereafter, scientists and companies should be able to complete their research dozens of times faster and safer.