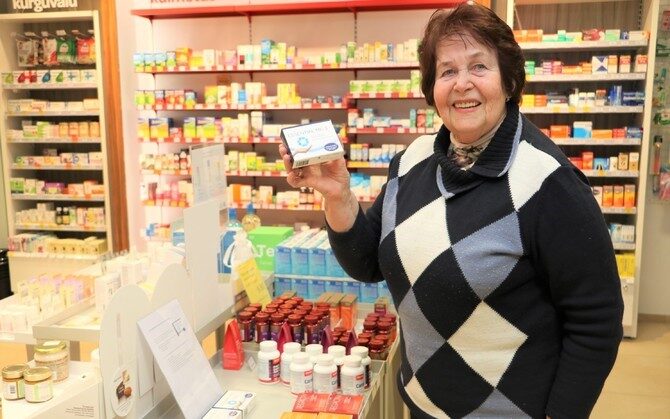 Marika Mikelsaar, professor emeritus at the University of Tartu, visited the pharmacy of Tartu University Hospital to verify that, as a result of a 20-year research, a dietary supplement containing an ME-3 bacterium is now available in Estonia’s pharmacies. Author/source: Mari-Liis Pintson, University of Tartu
Share

As a result of more than 20 years of research by the scientists at the University of Tartu, the lactic acid bacteria strain ME-3, known for the last 15 years as the bacteria Hellus added to the dairy products of Tere, has now reached Estonia’s pharmacies.

ME-3 capsules were already sold in pharmacies all around Australia, the United Kingdom and Italy before reaching the shelves of Estonia’s pharmacies. The ME-3 bacterium is also added to the food supplement which normalises cholesterol levels, Reg´Activ Cholesterol, sold in 11 countries.

The capsules now being sold in Estonia contain the strain in a pure and concentrated form; every capsule contains eight billion of Lactobacillus fermentum ME-3, which was discovered in 1995 from the intestine of a child from Tartu.

Marika Mikelsaar, professor emeritus at the University of Tartu (UT), together with Mihkel Zilmer, professor of medical biochemistry at UT, lead the work group that discovered the ME-3 strain. Last week, she visited the pharmacy of Tartu University Hospital to witness the fulfilment of a 20-year dream with her own eyes.

“At every conference, the most fascinating presenters are asked about their dreams. A scientist always spontaneously answers that their dream is to have their discovery put to use,” said Marika Mikelsaar.

She pointed out that, like with all basic research, in 1995, no one knew what the implications of the ME-3 strain would be. “If your goals in science were very targeted, then maybe it wouldn’t be real science,” she added.

According to her, ME-3 was something completely new compared to other probiotics known at the time. Mikelsaar recalls that in 2002 the World Health Organisation still defined probiotics as food supplements which influence and improve human microbiota.

“In 2010, a new definition was applied, according to which there are also probiotics that have targeted properties, the same way as ME‑3 lowers cholesterol levels and improves cellular respiration. This is a class of its own,” said Mikelsaar.

The lactic bacterium ME-3 is a strain of human origin with well-described and scientifically-proved properties. It is the only strain in the world that has been patented for two useful effects –antimicrobial and antioxidant . Furthermore, research conducted in Estonia and abroad has shown that the ME-3 strain has health benefits, specifically it

“ME-3 has been studied and protected at the University of Tartu for over 20 years. It’s good to see that scientists are enthusiastic and wish to further develop the bacterium’s applications,” commented Jane Luht when talking about the most successful technology transfer project at UT thus far.

“Using ME-3 in dairy products and in food supplements is not the only solution – we are also looking at opportunities for applications in other fields.” According to Luht, the ME-3 strain can be used, for example, in salad oils, chocolate, plant-based milks, and also in cosmetics. All this requires further research in cooperation with potential partners. “The initial data, however, looks promising,” added Luht.

In Estonia, the capsules are currently being sold in four pharmacies: the pharmacies of Mustamäe Health Centre, Arsenal Centre and Baltic Station Market in Tallinn and the Uus Apteek at the Tartu University Hospital.

On 27 March, the University of Tartu and the company AS Tere organised a conference to celebrate the 15th anniversary of bringing the dairy products of the Hellus range to the market. Pharmacists, family physicians and nutritional advisers were invited to the conference to raise their awareness of the health benefits of the ME-3 strain.