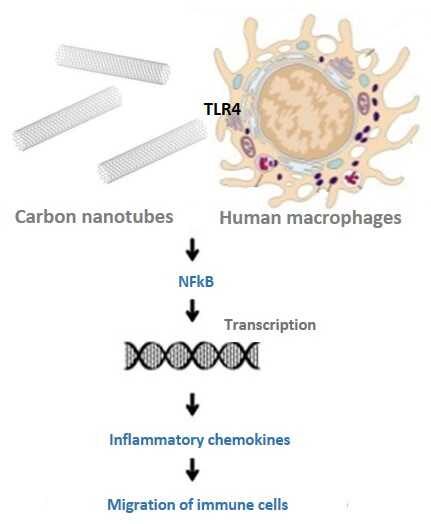 Carbon-based nanomaterials including carbon nanotubes (CNTs) have been shown to trigger inflammation. However, how these materials are ‘sensed’ by immune cells is not known. Researcher at the National Institute of Chemical Physics and Biophysics, Olesja Bondarenko, and her colleagues investigated the effects of two nanomaterials on human immune cells and their article[1] was recently published in the journal Scientific Reports.

Selected materials were carbon-based single-walled CNTs (SWCNTs) and graphene oxide (GO). Bondarenko said that despite both of these materials being carbon-based, their toxic and immunomodulatory effects in human cells in vitro and in vivo are strictly different: SWCNTs are well-known for their toxic effects (pulmonary inflammation, granulomas and fibrosis in humans after inhalation) and GO is presumably safe. “Thus, our aim was to compare the cellular responses to these nanomaterials and to depict the molecular mechanisms responsible for the toxic effects of SWCNTs,” she explained.

Researchers selected primary human monocyte-derived macrophages as the cellular model. Macrophages are a class of the immune cells that protect us against foreign intrusions such as bacteria, viruses and also particles and nanomaterials and they are one of the first cells that “meet“ nanomaterials in the body with the aim to neutralize them. “It means that the interaction of nanoparticles with macrophages is highly important and may determine the fate, distribution and toxicity of nanomaterials in our body,” Bondarenko said.

Research has demonstrated that the exposure of macrophages to SWCNTs, but not to GO, increased the expression of many genes. Most of these genes were responsible for the production of chemokines, small signalling proteins. After additional immunochemistry experiments, researchers found that macrophages produced these small proteins to signal the potential danger of SWCNTs and to attract other immune cells such as dendritic cells and monocytes.

“We suggest that we found the molecular link to the toxicity of SWCNTs in human lungs: indeed, production of chemokines by macrophages and the following accumulation of the immune cells could cause pulmonary inflammation and granulomas,” Bondarenko noted.

Authors of the publication also studied the reasons behind the SWCNT-induced chemokine signalling in macrophages in greater depth. They found that this was caused by the binding of SWCNTs to Toll-like receptors (TLRs): TLR2 and TLR4. “Intriguingly, TLR4 is also responsible for the binding of some bacteria, meaning that SWCNTs were recognized by macrophages by the same mechanism as bacterial cells,” Bondarenko mentioned.

The newly discovered ability of macrophages to recognize nanomaterials by means of classical “pathogen recognition” receptors has lit a spark in scientists’ eyes.  Certainly, it opens doors for many unexplored research directions and exciting new possibilities.

“First, one may ask whether macrophage cells exposed to SWCNTs are still able to recognize and cope well with bacteria and viruses when their recognition and defence systems are already overloaded with nanomaterials. On the other hand, it is also possible to ask whether certain nanomaterials can be the stimulants for the immune cells. In the latter case we could, for example, use the same materials as the vaccine adjuvants,” Bondarenko explained.

This current work was conducted during Bondarenko’s postdoctoral studies at the Karolinska Institute in the Nanosafety & Nanomedicine Laboratory which is headed by professor Bengt Fadeel. After that, she received the personal grant entitled “Nanoparticle-macrophage interactions in vitro: focus on nanosafety” from the Estonian Research Council to continue investigating this topic at the National Institute of Chemical Physics and Biophysics in the Laboratory of Environmental Toxicology, which is headed by professor Anne Kahru.

“During this project, we are moving from nanosafety to the nanomedicine field, and I am very excited about it. Differently from nanotechnology that is already very well developed and from nanotoxicology that is, by now, fairly well understood, the implementation of materials in nanomedicine is still in infancy,” said Bondarenko who was also selected to top the list of the 12 most outstanding Estonian women in 2018 by Estonian World[2].

She added that despite the progress being made, scientists are not yet fully able to predict and manipulate the behaviour of nanomaterials in complex biological environments (such as the human body), and a deeper understanding in this field will definitely enable us to create better nanomaterial-based drug carriers, contrast agents, antibacterials and immunostimulants.