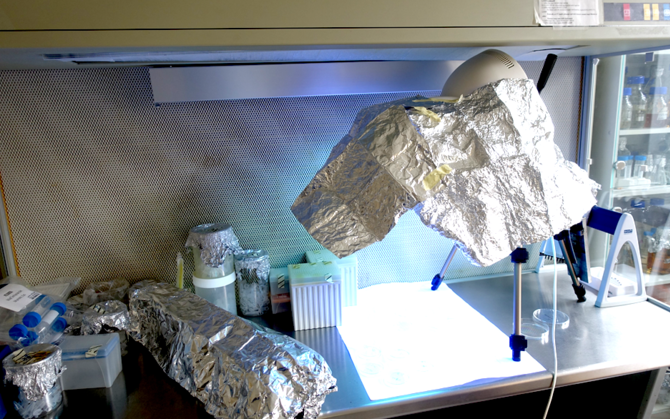 The lamp has a foil cover for reducing the so-called “sunbed effect”. But under the lamp, the surfaces being tested are visible to the scientists. Author/source: Angela Ivask, NICPB
Share

Scientists from three Estonian research institutions have created coatings which kill over 90 per cent of bacteria found on surfaces in just five minutes. If these coatings are put into use, they might slow down the proliferation of antibiotic-resistant bacteria (bacteria which do not respond to antibiotics). They could also suppress flu epidemics, which are increasingly claiming more and more lives.

These special coatings have been created by scientists at the University of Tartu (UT) and the National Institute of Chemical Physics and Biophysics (NICPB). Tallinn University of Technology (TUT) is involved with the product development.

First, a novel nanosolution is mixed together. When a very thin layer of solution is sprayed on a surface and the surface is then illuminated, the nanoparticles in the solution start killing the bacteria, as if by magic.

Of course, this has nothing to do with magic – the miracle is performed by good old physics and chemistry. Namely, the solution the scientists mixed together contains zinc oxide and silver nanoparticles.

Zinc oxide is a photocatalytic substance, which means that when it comes in contact with the UV light contained in sunlight it becomes active and starts degrading organic matter. The added silver makes the material even more effective against bacteria as it attacks bacterial cells directly. As a result, the amount of zinc oxide can be reduced and the two substances work together harmoniously.

Surfaces coated with this solution, comprised of a precisely determined substance ratio, are very effective and bacteria die out quickly.

“Just five minutes after the illumination of the solution-coated surface with ultraviolet A radiation, 90 per cent of the bacteria on the surface are dead,” confirms Angela Ivask from the Laboratory of Environmental Toxicology at NICPB. This novel surface coating is the result of her individual research grant.

Ivask says she has never seen such an effective antibacterial coating. “Even based on articles in scientific journals, we can say that we have one of the most effective coatings. Of course, there are other antibacterial coatings with nanoparticles, but we haven’t tested any that can kill bacteria as fast as ours.”

Development started five years ago when a young UT doctoral student, Meeri Visnapuu, got a call from a local door handle company. The company had ordered door handles from Italy that supposedly contained silver additives and were therefore supposed to be antibacterial.

The company hoped the scientists could help verify this claim and thought of perhaps even producing something similar themselves. Visnapuu, Vambola Kisand, her supervisor at UT, and their colleagues at NICPB were happy to lend a helping hand. But they found that the door handles were covered with varnish and the diverse composition of the varnish made studying its components very difficult.

“We found many other components but detected almost no silver,” said Ivask, who is one of the world’s most cited environmental toxicologists.

It was 2013 and no one in Estonia’s science villages had thought about antibacterial coatings yet. However, this accidental contact with the door handle company gave the scientists an ambitious idea: let’s make it ourselves and make it better!

Thus began the first experiments in Tallinn and Tartu with nanoparticles that degrade organic matter by light. Bacteria-killing silver was applied in these experiments right from the beginning.

(As a side note, the door handle company is still unaware that they were the direct catalyst for this new scientific topic.)

Result: Estonian scientists have invented ultra-effective antibacterial coatings, which are made of nanoparticles and can be attached to hard surfaces by heating.

“In the future, we want to start manufacturing antibacterial film,” Ivask says with excitement at the NICPB Laboratory of Environmental Toxicology.

At the same time, Meeri Visnapuu, a materials scientist at UT and NICPB, is working at the TUT Laboratory of Polymers and Textile Technology with the nanosolution she designed. Among themselves, scientists simply call the lab a film laboratory.

“We mix the right concentration of nanoparticles in the polymer and try to make it into an antibacterial film or something similar – something that can be used to cover, for example, a tabletop or a hospital bed rail,” said Ivask, describing the efforts of Visnapuu.

Research and development are divided between the three institutions in the following way: the fluid containing nanoparticles were developed at UT, the experiments with bacteria and the safety research were conducted at NICPB and mixing the material with polymer has mostly taken place at TUT.

To determine the coatings’ actual mode of action, scientists used the results from Angela Ivask’s prior research. This was special molecular-biologically designed sensor bacteria, which can identify the cause of their own death. These sensor bacteria show the scientists in great detail how the newly developed surface coatings are actually able to kill bacteria.

Life with or without bacteria?

A great amount of work has been done and scientists are waiting for offers of cooperation from companies interested in packaging their new knowledge and skills into a consumer product.

Bacteria-killing tabletops, wall paints and cover sheets – it’s all possible. Before such products find their way into hospitals, buses, kindergartens (and why not also on the door handles of public toilets?), however, society needs to have a serious discussion about how bacteria-free we actually want our environment to be.

The problem is that the surfaces designed to kill bacteria cannot differentiate between good and bad bacteria: if there is any bacteria on the surface, it will die.

In theory, it would be nice if, in the future, when taking hold of the handrail in a bus, we wouldn’t have to worry whether the person holding on to it before us sneezed into the palm of their hand or on the inside of their elbow. But at the same time, wouldn’t an environment that is too sterile render our immune systems weak and lazy?

Angela Ivask thinks that, for example, when in a hospital as a visitor, she would be glad if she knew that all the surfaces there were antibacterial. As a scientist she also emphasises that in that case a lot of attention must be paid to the correct maintenance of these surfaces.

“Take our photocatalytic surfaces, for example – by degrading organic matter a degradation product is produced, which often stays on the same antimicrobial surface. Thus, a new layer of organic matter develops, which is a good place for other microbes to grow. That’s why it is very important to keep these surfaces clean.”

But Ivask is not convinced that every public institution should have these surfaces, “Maybe it would be more efficient to use more soap and water to prevent disease outbreaks?”

There is no unanimity on how much microbe-killing disinfectants and antiseptics should be in our lives, but scientists are working on it. For example, Ivask is part of the pan-European network COST AMICI, which stands for “Anti-MIcrobial Coating Innovations to prevent infectious diseases”.

The main reason for the remaining unanimity on antibacterial coatings is the fact that even though laboratory tests demonstrate their efficiency, there are still no studies on whether their use in hospitals or other public places would actually reduce the spread of infectious diseases.

According to Angela Ivask, Finnish scientists, for example, have recently published the results of a study on this topic, during which they tested prototypes of antibacterial coatings meant for offices, kindergartens and retirement homes.

“The authors of this study found that using their table covers has, for example, reduced the amount of certain viral diseases in kindergartens. However, this is difficult to analyse because the spread of diseases in a kindergarten highly depends on how many sick children were brought to the kindergarten on a certain morning. In addition to this, there are many other key factors that might influence the results.”