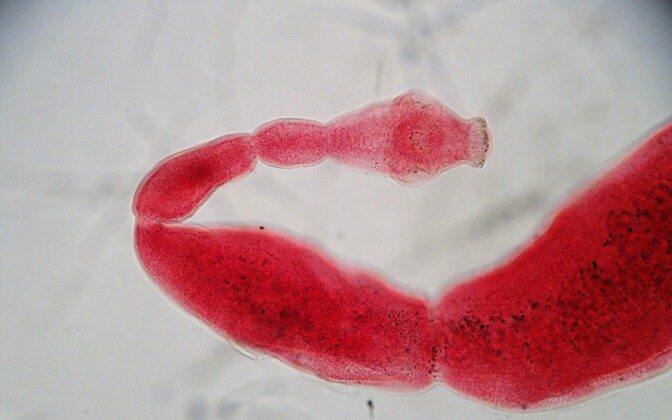 As many as two doctoral theses were defended in the University of Tartu recently on the Echinococcus tapeworms that represent an alarming global public health and economic problem. These are the first studies on the Echinococcus tapeworms on a global scale. One of the significant ways of spreading is, for example, international animal trade. What is the situation in Estonia?

Doctoral theses defended in the Tartu University Department of Zoology under the supervision of Urmas Saarma, shed some light on the Echinococcus tapeworms that parasitize humans and animals, and provided new information on the secret life of these parasites. Liina Kinkar was focusing on the global genetic diversity and historic processes shaping the current distribution patterns of a particular species of Echinococcus (E. granulosus sensu stricto), that is one of the most widely distributed species of Echinococcus and also most commonly associated with human infections; Teivi Laurimäe, however, studied the number of species and the population genetic structure of the three most dangerous strains.

Both authors used long sequences of mitochondrial DNA (near-complete and complete mitogenomes) in their studies, which enabled in-depth analyses into the genetic diversity and population structure of these tapeworms. Both doctoral theses are also the first to use global sampling, since the previous studies have been conducted on a local scale. The results revealed that international animal trade has likely had a significant effect on the tapeworm’s present global distribution.

There probably is not a single existing organism that is free of parasites, which is why parasitism can be considered one of the most common ways of life in nature.

Parasitism is in fashion in nature

There probably is not a single existing organism that is free of parasites, which is why parasitism can be considered one of the most common ways of life in nature. Parasitism has a negative image amongst humans, as nobody is interested in sharing one’s benefits with others. Thus, we deem other people as parasites, as well as, for example, flies and wasps feeding on a flatfish that has been hung to dry by the shed. Ecologically, parasitism still refers to the direct physiological exploitation of another organism – either absorbing energy from its tissues (e.g. sucking blood) or using the other organism as a habitat. Parasites use the energy resources of the host, which is why the host must make an additional effort to continue its normal activities (e.g. spend more time on eating). However, this can significantly reduce the success of the host.

Also, people have various parasites, which we may not be aware of due to their small size and low energy consumption, especially if they are quickly eliminated by our immune system. But there are also bigger parasites that our body cannot cope with, so we need to seek medical attention for help. However, it is important to know that it is usually not in the interests of any parasite to exhaust the host to its death, at least not at a time when the survival of the host is necessary for the development of the parasite, because death of the host also means death for the parasite. Therefore, parasites exhaust the host slowly and can remain “secret” until the last minute. This is also the case with tapeworms.

Parasitoses or diseases caused by parasites are widespread in the world, however, their incidence is higher in economically underdeveloped regions. According to the World Health Organization (WHO), the number of people infected in Asia, Southern parts of the African and the American continent is more than a billion. One of the most common parasitic worms in humans are flukes, roundworms and tapeworms.

Humans represent dead-end hosts for Echinococcus granulosus. That is because usually humans do not transmit the disease, as the life cycle requires the ingestion of infected organs by a predator. However, humans are not commonly preyed on, and so the parasite ends up in a “dead-end”.

Tapeworms are flat-bodied, and in some cases can grow even several meters long (for example, broad tapeworm, pork tapeworm and beef tapeworm), but there are also species of just a few millimetres in length (the Echinococcus tapeworms).

In order to complete the life cycle, Echinococcus granulosus needs two hosts – the intermediate hosts are usually ungulates (e.g. wild animals like elks and domestic animals like sheep, goats, cattle, buffaloes), but by accident, humans may also acquire the infection, however, the definitive hosts are various canines (e.g. wolves, dogs). While the parasite does not cause  severe symptoms in the definitive host, the disease can be life threatening for the intermediate host. Namely, fluid-filled cysts develop in intermediate hosts, which can grow quite big – the largest known cyst found in a human weighed 3 kg. Larvae develop inside cysts, expecting to be eaten by a definitive host where they develop into adult worms.

Echinococcus granulosus has a substantial socio-economic impact, as the economic damage globally due to infection is about $ 3 billion a year. Humans acquire the infection most commonly from dogs that pollute the environment with faeces containing the parasite eggs, but eggs can also adhere to dog hairs. Humans are dead-end hosts for the parasite, because, normally, a person does not transmit the disease as its life cycle requires the ingestion of infected organs by a predator. However, humans are not commonly preyed on, and so the parasite ends up in a “dead-end”. However, the infection causes severe health problems for people, and in the worst case, if left untreated, can lead to death when the cysts accidentally rupture causing anaphylactic shock, or typically when cysts eventually grow large enough to disrupt the infected organ’s (liver/lung) function

One or several species, and what are the patterns of distribution?

Echinococcus granulosus is an intricate species complex with a global distribution, whereas some species in turn consist of several strains/genotypes (originally named G1-G10). Different strains exhibit differences in their lifecycles (e.g. some are capable of infecting humans, while others are not); some have a distribution mostly in the northern hemisphere, others in the southern hemisphere. There are also differences in the symptoms caused by the strains – e.g. when infected by the G1 strain, the disease develops faster and with much more serious consequences. Echinococcus granulosus was originally regarded as one species, however, due to differences in strains, it was suggested that these are in fact several different species of tapeworms. It is essential for the doctors and veterinarians to accurately determine the species in order to implement more efficient therapy to stop the spread of the infection.

As the parasitic infection is prevalent primarily among domestic animals, the global genetic mixing can be attributed to the animal trade, which has helped the worms to spread almost everywhere. The analysis revealed that the likely ancestral origin of Echinococcus granulosus sensu stricto is the Middle East.

Based on E. granulosus sensu stricto near-complete mitogenome analyses, that included samples obtained from various host species (sheep, cattle, human, wild boar and domestic pig, goat, buffalo, camel, dingo) originating from South America, Europe, Asia and Australia, Liina Kinkar showed that this species consists of two distinct strains, not three, as was initially believed, and that the genetic diversity of both of these strains globally is high. Interestingly, the genetic similarity between geographically distant samples (e.g. Australia, North Africa and Europe) was common. As the parasite infects primarily domestic animals, this genetic pattern is likely due to extensive animal trade, which has fascilitated the spread of these worms world-wide. Phylogeographic analyses showed that the likely ancestral origin of this species is the Middle East, which is one of the earliest centres of domestication for sheep, cattle and goats – all common intermediate hosts for the parasite.

One of the most important aims of Teivi Laurimäe’s doctoral thesis was to resolve the species status of the four strains/genotypes (G6, G7, G8, G10) of Echinococcus granulosus – which has been a controversial issue for decades. So far, no consensus had been reached whether to treat these four genotypes as one, two or even three species. However, a unanimous understanding is important both for doctors and veterinarians for the accurate communication of the species and their impact on the health of people and domestic animals.

Additionally, with the help of near-complete (G1) and for the first time with complete mitogenomes (G6, G7), Teivi also studied the population structure of the genotypes (G6, G7, G1). These genotypes are most frequently known to be infecting humans worldwide, with higher prevalence rates in the Americas, Africa and Southern-Europe. With all three genotypes, it was also clearly visible that animal trade has had a significant impact on the structure of populations, whereas for G6 and G7 geographic isolation in some areas has also played a role. Surprisingly, also one genetically significantly divergent Echinococcus granulosus sample was identified from Mongolia, which raises the question about still uncovered genetic variation in the species complex.

In terms of human health, it is definitely noteworthy that the strain G1, which is considered to be most infective to humans , was recently discovered in Tartu in another study. How it arrived here, and how wide its distribution is in Estonia, is yet unclear.

What is the situation in Estonia and should our dog owners be concerned?

In Estonia, the “wildlife” genotypes (G8, G10) are known to be circulating between moose-deer-wolves. In terms of human health, it is definitely noteworthy that the strain G1, which is most commonly associated with human infections, was recently discovered in Tartu. How it arrived here, and how wide its distribution is in Estonia, is yet unclear. Human infections with the wildlife strains (G8 and G10) are considered rather rare in this part of Europe, and it is thought that the progression of the disease is usually much slower and less severe when compared to G1 (G1 cysts have a faster growth rate) Long incubation period of cystic echinococcosis makes diagnosis and treatment rather complicated – it can take up to 10-15 years for symptoms to develop. Whereas symptoms depend on the location of the cyst in the internal organs (liver/lung) and the size of the cyst. Often, either surgery or chemotherapy (Albendazole) is used as a method of treatment.

So far, the dog owners in Estonia have no need to feel overly concerned. However, hunters with a habit of feeding raw viscera of the hunted animals to their dogs should keep in mind that dogs acquire the infection through the consumption of raw infected organs. Subsequently, the infection may be transmitted from dogs to humans, who contaminate the environment with Echinococcus eggs in their faeces, or alternatively with the eggs which get attached to the fur of the dog and humans get the infection through contact with the dog. Although cystic echinococcosis is so far rather rare in Estonia (1–2 or less cases a year), it is more common for example in Latvia and Lithuania. Thus, regular administration of anthelminthic drugs and avoiding feeding raw offal to dogs is definitely important in preventing echinococcosis, and of course preventing other parasitic diseases as well.