Back
humanities and the artsnatural sciences 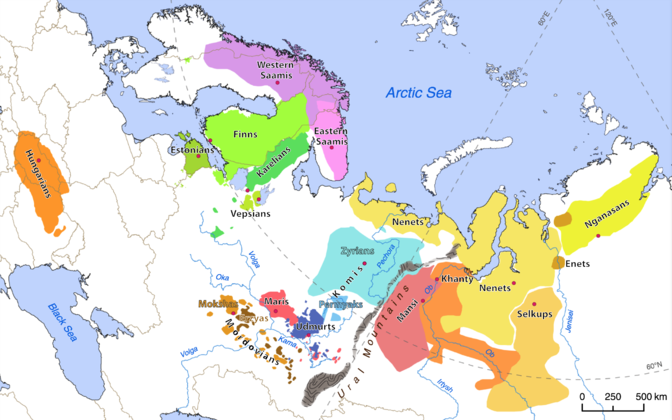 Connections between the pathways of languages and genes have intrigued scientists as well as the wider public for many decades. When most of the peoples of Europe speak Indo-European languages, the Finns, Estonians and other much smaller peoples, living mostly in Northern and Eastern Europe and in West Siberia, speak languages belonging to the Uralic language family. Even though the distribution area of Uralic languages is very large, the number of speakers is much smaller, i.e. only about 25 million people, when compared to the number of Indo-Europeans, i.e. about three billion. The largest groups of Uralic language speakers are Hungarians, Finns and Estonians.

In addition to the Estonians, the research involved the Sami, Ingrian Finns, Finns, Karelians and the Vepsians from Europe, the Maris, Komis, Udmurts and the Mordvins from the Volga-Uralic region, and the Khanty, Mansi, Nganasans, Nenets and the Selkup from West Siberia. The DNA samples of the peoples other than Estonians were received through international cooperation.

It is a well-known fact that, generally, people are genetically similar primarily to the peoples living close by. It was our aim to see how similar the Estonians are living on the western border of the Uralic languages and all other peoples speaking the Uralic languages, and to what extent is the relation seen in the languages reflected in their genes.

We found that geographic closeness has played a role in shaping the genetic diversity of today’s populations more than anything else. Surprisingly, we found that all speakers of Uralic languages, except the Hungarians and the Mordvins, have a common genetic part that the geographic neighbours belonging to other language spaces, e.g. the Germanic, the Slavic or the Turkic language spaces, do not have.

It is highly likely that this part of genetic legacy has arrived here from the east, probably from around the Ural Mountains and West Siberia which are thought to be the origins of the languages as well. This indicates that the spread of the Uralic languages was also influenced by the migration of the peoples speaking these languages.

At the same time, it should be noted that the Hungarians and Estonians, who belong to the top three most spoken Uralic languages in terms of the number of speakers, are genetically the least connected to their other language relatives. The Hungarians, for example, are not connected with any of the other peoples speaking the Uralic languages, but are similar only to their geographic neighbours (the Romanians, Slovaks, Slovenes, Poles, Ukrainians, etc.). Compared to their geographic neighbours, Estonians have a larger common part only with the language relations living in the neighbourhood – the Finns, Karelians, Vepsians and the Sami – but not with the language relations living further away, e.g. the Maris, Komis or the Nenets and the Nganasans.

From our analyses, we also found the common genetic component, which seems to be represented mainly in the Uralic peoples and which probably originates from Siberia. We also saw that the peoples speaking the Uralic languages share more sections of the genome that reflect their recent joint history. For example, when comparing the Finns and the Nganasans, they share more sections between them than the neighbours of the Finns, who do not speak the Uralic languages (the Swedes, Latvians, Lithuanians), and the Nganasans.

This is a good springboard for diving into the past. Henceforth, we intend to include a study of the associations between languages and genes, and the old DNA analysis – the genetic characterisation of peoples who once lived in our areas and the areas of other Uralic language spaces. This would allow us to see, whether the influence from the east (Siberia) reached our areas at the same time that the branching of the Baltic Finnic languages is thought to have occurred here, i.e. at about the beginning of the current era. We are working together with archaeologists as well as linguists to find this out.