Nanoparticles Could Help to Deliver Cancer-Drug to the Right Target 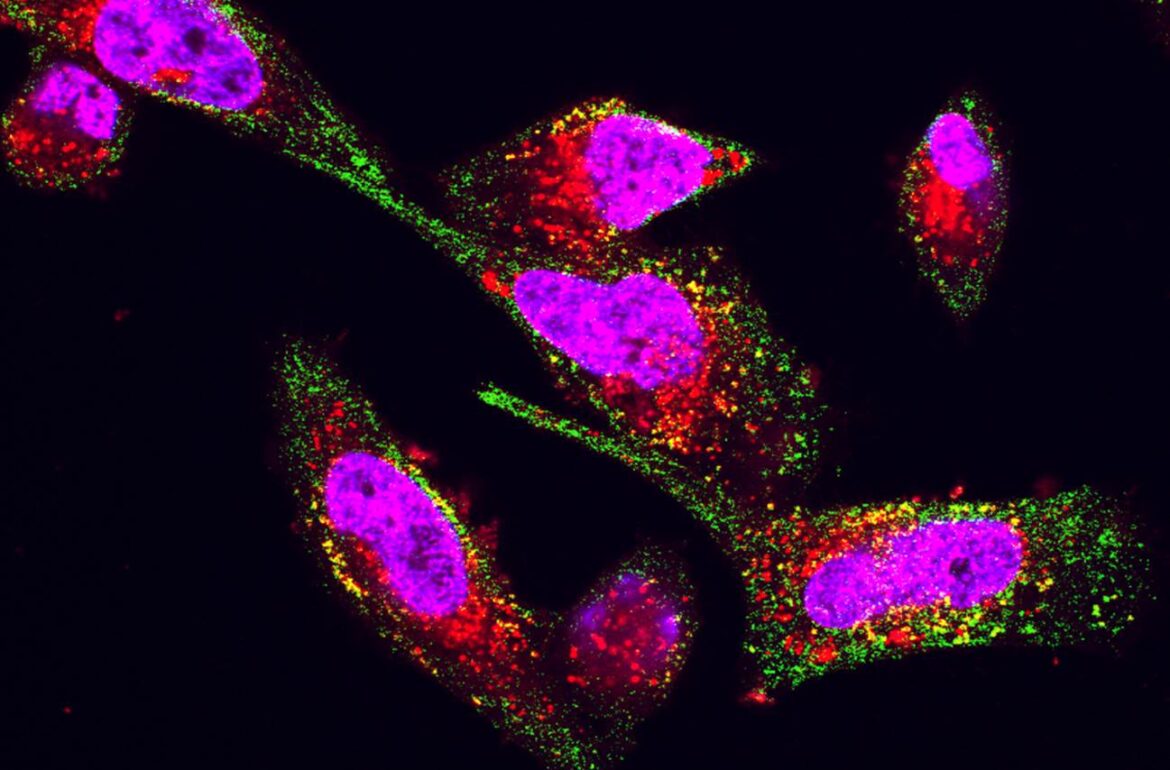 Uptake of nanoparticles loaded with ToxInvent’s Utorubicin in cultured prostate cancer cells. PPC-1 cells were incubated for 3 hours with Utorubicin-loaded nanoparticles. The Utorubicin (red) accumuates inside the cells, including in the nucleus of the cells (the site of action of the drug). Nanoparticles and imaging by Drs. Anne-Mari Anton Willmore and Lorena Simón Gracia.
Share

A major effort in anticancer research is dedicated to finding the drugs that target only the tumor, not a patient’s liver or other healthy tissues. Such precision drugs are expected to have fewer side effects and be more effective because of the higher accumulation of the drug in the tumor.

Since last year, the Institute of Biomedicine and Translational Medicine at the University of Tartu and ToxInvent LLC collaborate on development of innovative anticancer drug candidates[1]. University of Tartu researchers test proprietary cytotoxic compounds developed at ToxInvent as anticancer warheads of tumor-seeking antibodies and as payloads of nanocarriers.

Professor of nanomedicine at the University of Tartu, Dr. Tambet Teesalu, described that they are evaluating the selectivity and activity of the precision guided drug molecules. “If the work goes well and we can prove that ToxInvent’s cytotoxic compounds are better than the ones on the market now, it will be a landmark and it has a huge potential because the world is always in need of more effective drug payloads”, he said.

Within the project, research fellow of cancer biology at the University of Tartu, Dr. Lorena Simón Gracia is exploring if it is possible to load ToxInvent’s drugs on nanoparticles that are able to find the exact place where the body needs the drug – the tumor. “Nanoparticles are very small particles (with diameter about 1000 times smaller than the diameter of a hair) that can be loaded with different drugs. These nanoparticles can be made smart by coating them with molecules that just bind to the specific receptors in the tumor cells. So they go through all the body and if they find the receptor, they just stick there and then they release the drug”, she explained.

Testing a Panel of Different Compounds

In the project, Toxinvent’s proprietary Utorubicin cytotoxic compound was utilized first as a warhead for affinity targeting moieties (antibodies, peptides) and nanoparticles. For now, the research group has developed methods for drug conjugation to antibodies but the protocols still needs some optimization. “It is a normal part of the learning curve”, Teesalu mentioned. “Luckily, Utorubicin is fluorescent so we can see it under the microscope and it makes our life a lot easier – we can see how the nanoparticles or antibodies bind to the tumor cells and release the drugs”, he explained.

Simón Gracia added that they have already succeeded in some important steps – they have encapsulated the highest possible amount of the drug in the nanoparticle, they have seen that the particles go inside the tumor cells and, what is more, that the drug kills the tumor cells. “In vitro is done and it works well, the next step is to try it on the tumor-bearing mice”, she said.

Both Teesalu and Simón Gracia mentioned that it is really important to work in collaboration with the company because of different reasons. For example, the company has a practical mindset and focus on practical aspects such as cost-effectiveness and potential to scale up the manufacturing of the compound. “Sometimes, even if you get really good results in the lab, it is prohibitingly expensive to manufacture the compound in large scale for clinical development “, Simón Gracia pointed out.

Teesalu added that collaboration provides good networking and establishes relations that can lead to additional projects.