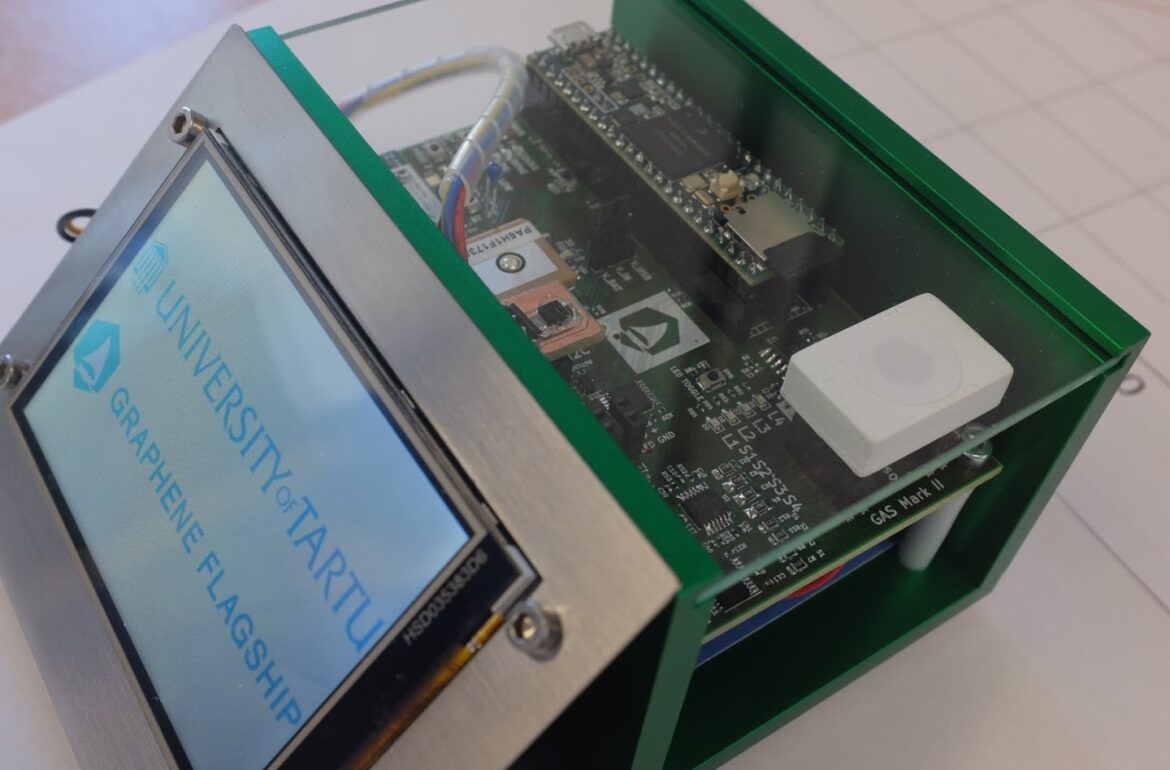 The sensor developed by researchers at the University of Tartu is located inside the small white box, which holds the sensor matrix. The sensor is also covered by a protective Teflon filter. Four sensors, each only half a square millimetre in size, are working simultaneously to collectively give information on air pollution. Photo by: Randel Kreitsberg
Share

For the last five years, physicists at the University of Tartu have been working on a graphene-based air sensor. This sensor, to be integrated into mobile phones, will actively monitor toxic substances in the ambient air and give recommendations to the person carrying it for choosing a safer route. The first prototype has now been completed and will be introduced to mobile phone manufacturers at the Mobile World Congress in Barcelona.

“It’s a prototype, in which everything is big. It can be called a prototype of a phone in the sense that it contains everything needed: a touch screen, a processor, Bluetooth, GPS – and at the moment it is all serving our sensor,” introduced Raivo Jaaniso, a senior research fellow at the University of Tartu.

When asked whether he feels proud, Jaaniso answered modestly: “It’s definitely a proud moment as I’m sure the entire team who worked on it will agree.”

Graphene is like a “white sheet”, a one-atom carbon layer, which can be given different functionalities by adding active molecules. The physicists at the University of Tartu have designed the graphene layer in a way that a sensor only a few square millimetres in size can sense several various airborne toxic substances – primarily those contained in the exhaust gas of vehicles.

“It works in more or less the same way as the human nose,” said Jaaniso.

Sensors detecting toxic substances have been created before, but using them is difficult because the concentration of toxic gases in the external environment is very low. The researchers at the University of Tartu have solved this issue, and first tests indicate that their new graphene-based sensor also works in “street conditions”.

What are the goals for the World Mobile Congress?

“Our primary aim is to introduce new graphene technologies – all the largest mobile manufacturers will be attending,” explained Jaaniso.

So, there’s a possibility that the Samsung Production Manager might spot the graphene sensor developed at the University of Tartu, become interested, and our sensor might be inside Samsung phones in a couple of years?

“Yes, why not,” the researcher agrees.

There are nine technology readiness levels for developing a new product or technology, and with the completion of this prototype, our researchers have moved from the fourth to the fifth level. According to the concept originally created by NASA for space technologies, the first level of technological development is related to fundamental research, and the ninth level is related to releasing the finished product onto the market.

“This means that, whereas earlier we were only able to test it in the laboratory, we now have the chance to validate the technology in the real environment – outdoors. There’s still a long way to go, and as we know, the need for investment increases exponentially the closer we get to the final goal.”

Simultaneously with Estonians, other laboratories across the world are also developing similar technologies. Every day, the technology managers of the international graphene research project ‘Graphene Flagship’, are actively trying to find industrial partners, so that the promising prototype could reach mainstream use in the coming years.

Jaaniso explained the next steps to be taken in the development of the device: “When we reach level five, the next goal will be to create a prototype in which everything is considerably smaller, and from which it will be only one more step to becoming the finished product. Among other things, long-term stability still needs to be thoroughly tested. We’ve also been thinking that we should get a few dozen people to test the device in daily use during the pilot project.”