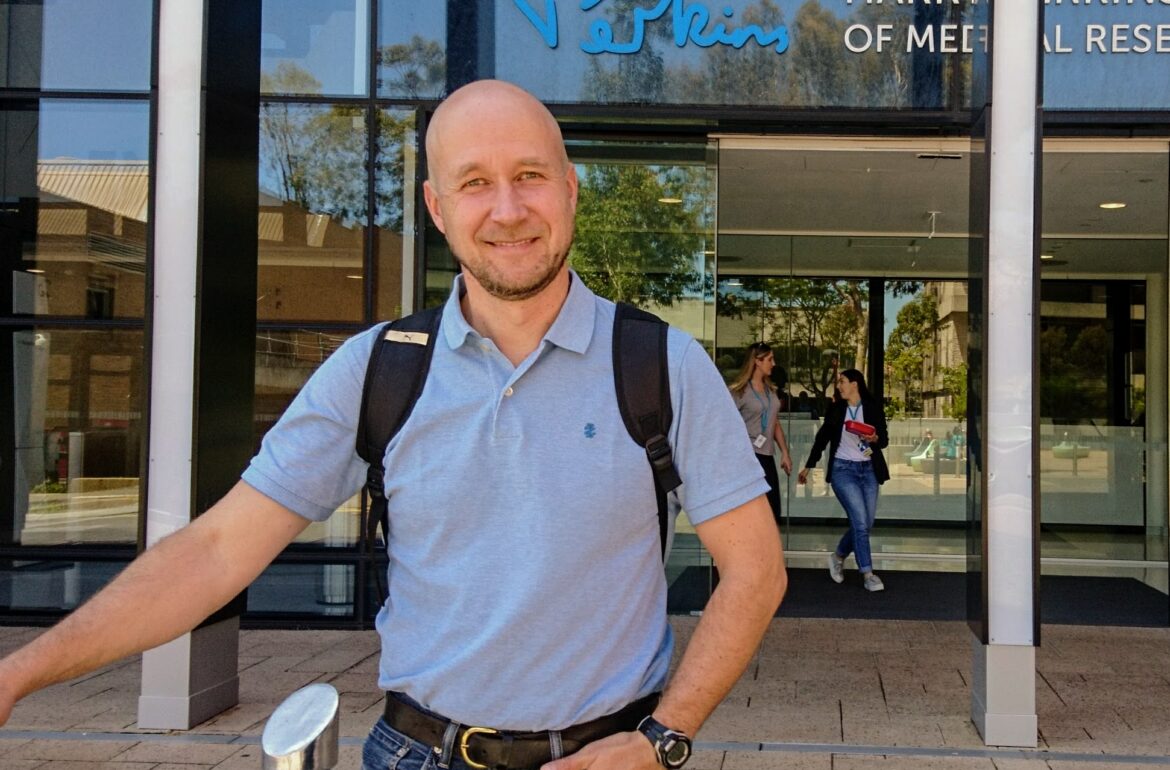 Professor of nanomedicine at the University of Tartu. Photo by: Juliana Hamzah.
Share

The growing discipline of nanomedicine is about to make new leaps in Estonia, as the University of Tartu recently established professorship for the branch of study. The leader of the research team, Tambet Teesalu, says that it’s easier to turn one’s research ambition and thoughts into reality in Estonia.

You are one of those Estonian scientists who have worked a long time in both Estonia and the U.S. How would you compare career opportunities in these countries?

They are actually extremely different. The American scientific landscape is huge and there are so many very good universities. In a sense, the US is the true frontier of scientific research in many fields, and it sets the trends and dictates what’s going on in all the science in the rest of the world. If we look at the nanomedicine field, all the rolling of that ball started with U.S. discoveries decades back.

When I think about the career opportunities, there is certainly a greater competition in the US compared to Estonia, and it is of the utmost importance for a successful career to get trained in the top research groups. Failing that, there is a great opportunity to end either in a series of eternal post-doctorates or to quit science. In Estonia, everything is smaller and everybody knows each other. An important aspect is that an individual researcher here can have a much larger impact and more opportunities to influence a field than in a large country. With this opportunity comes the individual responsibility for the well-being of a certain research field in Estonia – in our case nanomedicine.

Returning to Estonia, I brought in-depth technical knowledge to the University of Tartu along with platforms for the development of precision cancer nanodrugs and was fortunate to get my activities funded by major grants from ERC, Wellcome Trust, and EMBO. After a transition period, the university made the strategic decision to launch the nanomedicine professorship – a very smart move considering the nanomedicine boom and more than 20,000 publications per year in the field. This example illustrates the point of Estonia being a flexible and innovative country. I imagine that creating a new unit at some of Europe’s great universities would have been more complicated.

While the funding for science is short everywhere in the world, at our Institute of Biomedicine and Translational Medicine the research equipment and infrastructure has improved enormously over the years I have been back in Tartu. I think we have really good conditions for basic and early translational research. However, there is a dire shortage of people who would have gone through the whole process of drug development with expertise in investigational new drug (IND) enabling and early studies.

In the field of biomedical medicine and in biosciences, we would like to make discoveries that really help patients in real life. But it’s not like in the U.S. where you can go, knock on the next door and ask for advice from your colleague who has already brought a drug on the market. It is good that we live in an internet era of easy communication. For example, we have weekly meetings with another cancer/nanomedicine lab at the Sanford Burnham Prebys Medical Discovery Institute in California to come up with ideas and share results. In a sense, we have a virtual lab.

Why is it good to be a scientist in Estonia?

One big reason is that one can turn their ambition and thoughts into reality here perhaps more easily than in a big institute of some larger country. At the same time, it is possible to motivate and direct processes even at the national level. I have been saying for some time that Estonia could have development grants like ERC (European Research Council). I hope that this has contributed to the fact that, as of spring this year, Estonian Research Council established such funding scheme and thus it is possible to develop research outcomes to proof-of-concept stage.

Importantly, there is outstanding clinical medicine in Estonia and the doctors here are very enthusiastic and cooperative. In contrast – if we start to cooperate with some major cancer institute, we would encounter a general lack of enthusiasm and many barriers.

Why return to Estonia from a wealthier and larger country?

I believe that returning to the roots is an important factor in coming home for Estonian scientists. Also, there are practical aspects related to raising children and Estonia is a good place for that. I think there is nothing wrong with the climate here; we have a lot of wild nature, freedom and the opportunity to live the kind of life people dream about elsewhere. There is a good balance between work and life here, if we compare it to Asia, or North America, for example. Therefore, if we could only make the environment more welcoming to young people, I think many would have a desire to come back and contribute to Estonian success.

If we look at your field, what does nanomedicine do?

Nanomedicine works on the nanoscale in the development of drug carriers and contrast agents. The typical clinically used nanoparticles are a thousand times smaller than the diameter of a human hair. We try to make these particles smart, so they know where to go when they reach the intended sites of action in the body. If we think about a common cancer drug, maybe 0.1% of it will reach to cancer cells and the rest will just leave the body or damage it. If we can make nanoparticles smart and direct them, we can increase the percentage of injected dose in tumour tissue and make the drug more effective and less toxic.

For example, it is possible to pack the drug, or combination of drugs, and the imaging agent simultaneously in the nanoparticles so we can monitor the accumulation of the therapeutics in the patient in real time. In the field of nanomedicine, about 20,000 – 30,000 publications in a year are published and that is a huge number. I think there will be an exponential growth phase going on here and now it’s going to take 10-15 years for until we can reap the benefits and have an array of smart nano drugs approved for clinical use. They help to diagnose or treat at the same time, and they also help to report changes in tissue. The possibilities are really endless.

What are the strengths of your lab here?

One major challenge for nanomedicine is the question of how to direct the drug to its intended site of action. The field of nanomedicine has been somewhat dominated by physicists, chemists and materials scientists, who have been successful in creating complex multifunctional particles composed of different components, but directing nanoparticle is still an unresolved problem. Together with our American collaborators, our research team is one of the leading ones developing homing peptides which, on the nanoparticles, would tell the particles the location that they need to reach in the body.

The concept is that there are different molecular markers of blood vessels in our normal and diseased tissues. These markers can be targeted with small homing peptides: short chains of amino acids typically under 10 amino acids in length. We are trying to develop a better way of finding these peptides, validating them in a comprehensive manner, and talk increasingly in Pharma’s language, so that we know exactly the quantitative information on pharmacogenetics and biodistribution, as well as how big the per cent of the dose injected reaches to cancer. This aspect of delivery is the biggest challenge for nanomedicine and that’s what we’re dealing with.