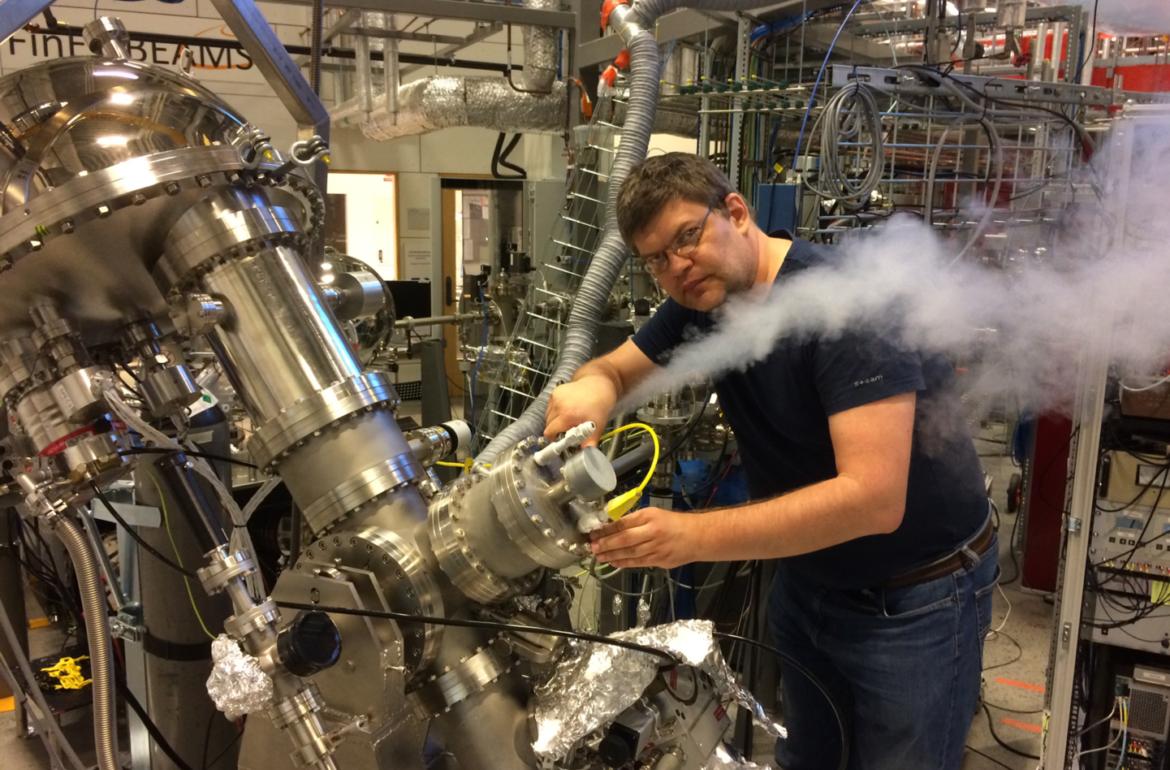 One of the authors of the recently published research, Vambola Kisand, working on the FinEstBeAMS beamline in Lund. Photo credit: Mati Kook.
Share

Recently, the first research paper was published based on experiments conducted on the new Estonian-Finnish beamline FinEstBeAMS, which has been constructed at the MAX IV synchrotron radiation centre located in Lund, Sweden. The research by the physicists at the University of Tartu involves the investigations of the complex electronic structure of three ionic liquids. The beamline is now ready for studying all fundamental, as well as applied research topics.

The public might not even know that scientists from the University of Tartu in cooperation with Finnish colleagues have established our “own” Estonian-Finnish beamline at the Swedish national MAX IV Laboratory in Lund. The FinEstBeAMS, which was completed two years ago and opened for research in late 2018, belongs to the Estonian research infrastructure roadmap and it is one of a few objects built by Estonians abroad. FinEstBeAMS, which cost about €7 million, was the first beamline at the MAX IV Laboratory completed as a result of international cooperation.

When all previous activities of the physicists from the University of Tartu were related to designing, building and commissioning the beamline, then by now, the first scientific experiments have been conducted, and as a significant milestone, the first research paper has been published based on results of these experiments.

The research takes a look into the complex electronic structure of three ionic liquids, [EMIM][TFSI], [DEME][TFSI] and [PYR1,4][TFSI], which were studied in a gaseous phase using photoelectron spectroscopy. Ionic liquids are basically molten salts, which are in the liquid phase already at room temperature. One of their most advanced applications is their use in supercapacitors instead of conventional electrolytes. Supercapacitors are able to store remarkable amounts of energy and deliver very large electrical power in a short time. So far, it is not completely clear why some ionic liquids are more suitable as electrolytes of supercapacitors than others. For better understanding application potential of ionic liquids, it is necessary, among other things, to determine their electronic structure using cutting-edge experimental methods, as well as advanced theory for modelling and calculation of their properties. Detailed understanding of the electronic structure on a fundamental level helps to reveal major factors influencing the properties of various ionic liquids.

“The beamline pleasantly surprised us with its intense photon flux, which allowed the studies to be conducted with extremely good spectral resolution and short data acquisition times. The obtained high-quality data provides excellent comparison and helps to verify theoretical results derived from modelling of the properties of ionic liquids carried out in our research group,” noted the head of the Laboratory of X-Ray Spectroscopy at the UT Institute of Physics, Vambola Kisand.

The MAX IV accelerator is the world’s brightest light source

MAX IV is a circular accelerator called a synchrotron. Many bunches of electrons circulating in the accelerator emit bright shortwave radiation, which allows to reveal the internal structure of matter (fragments with the size of a few nanometres) to be studied, e.g., biological molecules or nano-sized materials. It is also well suited for the investigation of the electronic structure and properties of various substances. In a stainless-steel tube with a diameter of one centimetre, in an ultra-high vacuum the bunches of electrons are accelerated on a 528-metre storage ring to a speed of up to 99.9999999985 per cent of the speed of light. The electrons “tamed” by a magnetic field circulate 24/7 and the radiated light is directed into beamlines with various endstations, where state-of-the-art experiments are conducted. The MAX IV is the first fourth generation synchrotron, being currently one of the world’s most modern synchrotrons and the brightest light source.

As a public research infrastructure, the synchrotron is intended to be used by anyone who is interested, from university research groups to entrepreneurs. In 2018, the six beamlines of the MAX IV Laboratory in operation had about 500 users per year; as several new beamlines will be brought into operation, it is expected that by 2025, the number of users will rise above 2,500 per year. Naturally, it is also expected increased interest of Estonian users to exploit the benefits of this large-scale research centre, which is only a 1.5-hour flight away.

At the same time, the European Spallation Source (ESS) delivering neutrons for high-quality research is being built next to the MAX IV Lab synchrotron radiation centre. When complete, the MAX IV and the ESS will jointly form in Northern Europe the largest research infrastructure which experimental methods are complementary.

The beamline provides photons covering energy range between 5 and 1,400 eV and it is equipped with three end stations for various experiments. FinEstBeAMS offers to scientists, as well as high-tech companies, high-quality shortwave VUV-XUV radiation for investigation of the electronic structure of single atoms, molecules, clusters and nanoparticles in a gaseous state as well as deposited on surfaces. It is an important tool to study particle and surface interaction, multi-layered structures and the surface characteristics of various materials, as well as the luminescence processes in solids.

So far, the capabilities of the MAX Laboratory have been exploited by Estonian companies like Clifton and Lumifor. The former analysed the properties of novel semiconductor materials for microelectronics and the latter studied new dosimetric materials for developing more efficient radiation detectors, which are used for measuring ionising radiation in the ambient environment, e.g., for monitoring the radiation levels of medical radiographs.

“Thanks to the investment made in FinEstBeAMS, Estonian scientists and engineers have access to any of the beamlines at the MAX IV Laboratory. This enables them to use the whole potential of the 4th generation synchrotron centre for solving the global challenges facing the humankind in various research fields – from engineering to life sciences, and environmental science to physics – but also for ensuring contemporary technology and sustainable development,” explained professor Marco Kirm from University of Tartu.