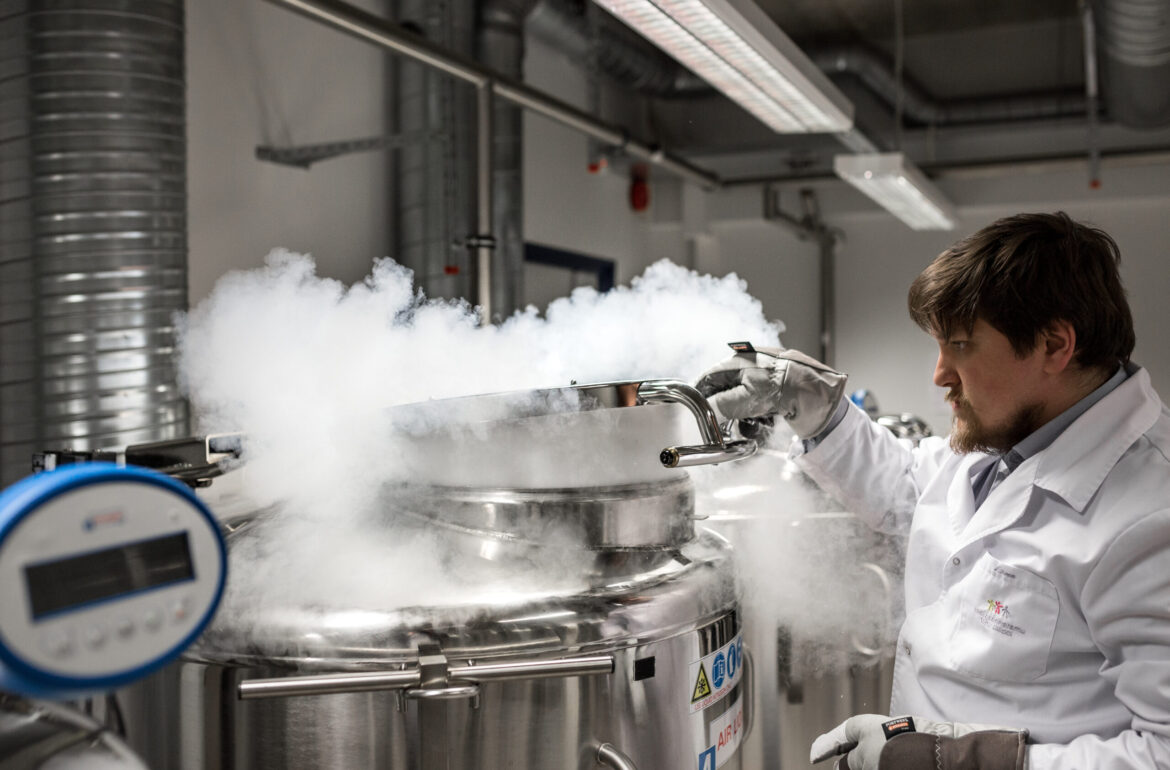 The scientists will use data from the Estonian Biobank and cell line experiments to investigate the biological function of genetic variants. Photo credit: Renee Altrov.
Share

The ERA Chair project, recently started in the Genome Institute at University of Tartu, is about to take Estonia’s personalised medicine another step further. Dr Jon Anders Eriksson from King’s College London, who will be leading the new project, explains the direction in which genetic science will be developed.

The new Centre for Genomics, Evolution and Medicine (cGEM) was established for the project with the aim to bring together personal genetic information and population genetic and evolutional aspects in the studies of diseases.

“The idea is that the entire genetic variability of humans, incl. the part causing diseases, has evolved during evolution. Variability has partly been created by random change – genetic drift – and partly as a response to the environment through natural selection. By understanding these processes for the creation of genetic variability associated with the disease, we can get a better understanding of the disease itself,” described Director of the Institute of Genomics, Dr Mait Metspalu.

We interviewed the leader of the recently formed ERA Chair, Dr Jon Anders Eriksson, and asked about the activities in more detail.

The ERA Chair project is to create a new strong working group. What is your plan when uniting all the knowledge from different fields? Who are going to work in your group and what are the study priorities?

The idea that underpins the ERA chair project is that evolutionary processes in the past, especially adaptations to novel diets, climates and pathogen exposures, have shaped a wide range of biological pathways, such as metabolism of fatty acids and inflammation signalling, that are today associated with the susceptibility to a wide range of common diseases, such as diabetes, cancers and cardiovascular and immune-mediated diseases such as Alzheimer’s or Parkinson’s disease. Understanding how genetic variants involved in these adaptations affect people living today in modern environments is important, as it will allow designing genetically informed strategies for treating or preventing disease, and allow us to live healthier for longer.

The ERA chair project will achieve this by recruiting group leaders associated with each of the Evolutionary Biology Center, the Estonian Biobank and the Institute for Clinical Medicine, who will work as a team with the ERA chair holder to create synergies between the different fields. We have just finished recruiting researchers for two of the positions, and have been very successful in attracting researchers at the top of their fields: the Evolutionary and Population Genomics position will be held by Dr Michael Dannemann, currently a Group Leader at the Max Plank Institute for Evolution in Leipzig, Germany, who will map genetic variants involved in past adaptations. The Bioinformatics and Medical Genomics position will be shared between three scientists: Dr Irene Gallego Romero, currently at the University of Melbourne, Australia; Dr Tõnis Org at the Genome Institute at University of Tartu, and Dr Georgi Hudjašov at Massey University, New Zealand. These scientists will use data from the Estonian Biobank and cell line experiments to investigate the biological function of genetic variants that we believe to be of interest. The third position in Molecular Medicine is in the final stages of recruitment and will be focussed on translating the findings of the group to a clinical setting. Our top candidates for this position have a strong background in immuno- and cancer genetics, and are eminently suited for this role.

Yes, I believe so. A big problem at the moment is that common immune-mediated and cardio-metabolic diseases are not independent, but patients usually suffer from a combination of different diseases (co-morbidities), sometimes undetected, and it is essential to treat each patient based on the complete picture. By integrating different fields, we will be able to unravel complex gene-gene and gene-environment interactions contributing to the susceptibility to these diseases, and deliver novel genetic instruments for precision medicine that will enable designing treatments informed by both genetic, physiological and environmental factors.

About genetics and environment: if we take cancer, for example, how important is the genetic background compared to environmental effects? Which one is more important?

The current research indicates that they are both important (it varies depending on the type of cancer), but the most interesting thing from the point of personalised medicine is that there are often genetic factors that influence the impact of the environmental factors on the risk for developing cancer, or the efficacy of different treatments (immunotherapies in particular).

What are those triggers and covariates (e.g. age) that decide/affect whether gene is going to be expressed or not?

Differences in gene expression between individuals can have many different causes. A substantial body of research point to dysregulation of a wide range of genes as causes of disease. This can be because environmental factors unbalance biological systems that are normally tightly controlled, such as the role of insulin insensitivity in diabetes mellitus, or because of genetic changes to regulatory regions of the genome, such as mutations in interleukin antagonist receptors that cause chronic inflammation.

Could you describe the evolutional framework (bottlenecks, gene flow etc.) in this project? If we have information about the migration of humans and bottlenecks of populations, then how can we use this information in personalized medicine?

Such information is important for personalized medicine in ethnically heterogenous populations, including Estonia, and for translating gene-disease associations in studies from one population to another. Evolutionary processes such as population bottlenecks, migrations and gene flow (intermarriage) between different populations and ethnic groups shape the genetic variation across the genome, and differences in evolutionary history can lead to differences in the association between specific genetic variants and diseases, such as those used to stratify treatments and predict disease susceptibility in personalised medicine. An evolutionary framework allows to disentangle the effects of different ancestries, making the genetic instruments more accurate, reliable and more widely applicable.

You said that plan is to combine disease-relevant datasets. What does it mean?

There are many different types of data relevant for disease. Case-control studies, or cohort studies where disease status has been recorded in longitudinal studies, with matching genetic data are important for identifying the genetic bases of diseases. We plan to collect such data for a wide range of cardiometabolic and immune-mediated diseases and cancers, as they share many biological pathways and environmental risk factors. We will also collect data on physiological factors linked to genetic variation and to disease, as these can provide important information on the mechanistic causes of disease susceptibility. Combining such data comes with challenges caused by differences in data generation and composition of genetic ancestry in study populations, but these can be overcome with the appropriate statistical framework.

Could you explain what is polygenic risk score and how it can be used to separate patients?

For simple, mendelian diseases, you can predict disease by detecting single variants. But most diseases have a complex genetic basis with many genes contributing to disease susceptibility. Polygenic risk scores are a way to estimate the combined effect of genetic variants in a person’s genome on disease susceptibility. They are usually used in a relative sense by comparing an individual’s score to the distribution of scores in the general population. This distribution can be used to define categories, such as high- and low-risk groups of individuals, with different expected outcomes and potentially different treatment strategies. For example, some interventions with potentially severe side effects may be justified for a high-risk individual, but not for a low-risk individual.

What are your next plans? When are we going to hear some news about genetic medicine from your project?

We are still consolidating our team and this process will continue this spring, so it is really too early to say at this stage. However, we should be able to move quickly once people are in place, so stay tuned.