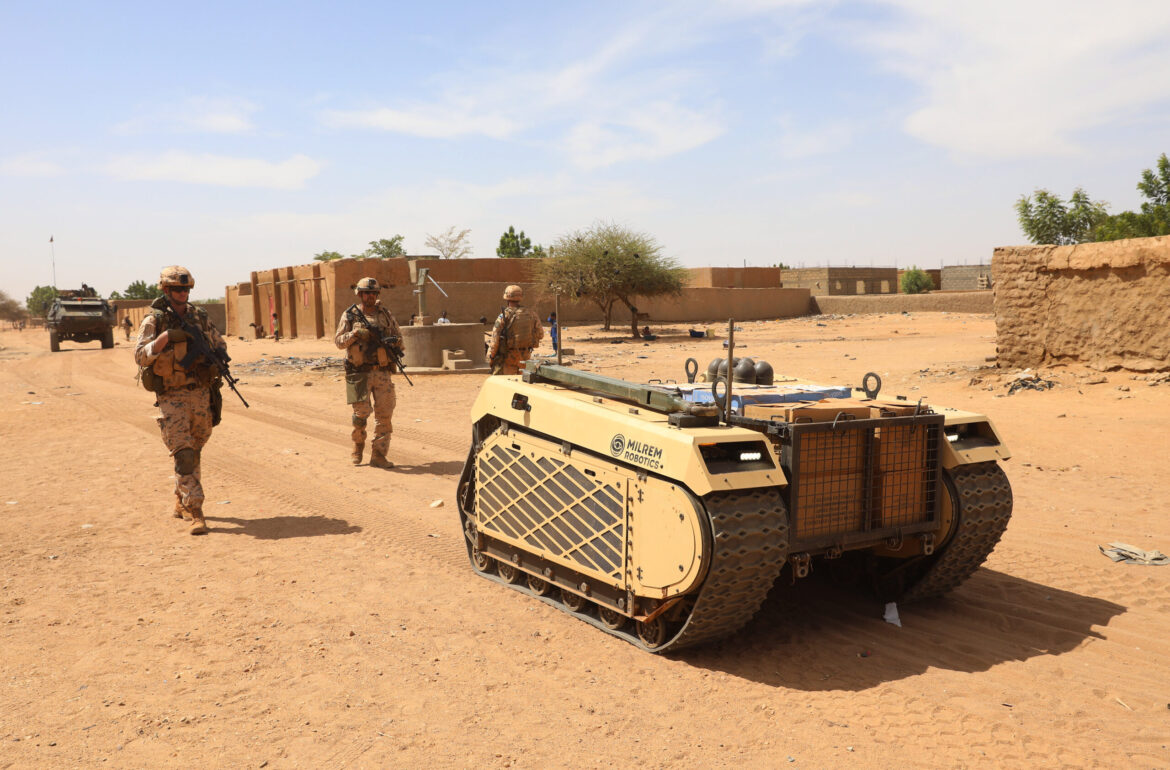 A robot that can turn into a mini-tank, firefighter or tree planter is built by an Estonian company, Milrem Robotics, together with scientists.

Estonians are one of the frontrunners when it comes to self-driving vehicles. There are several companies and scientists in Estonia coming up with new solutions. Milrem Robotics is one of them. This Estonian company started off by building tanks. Now the scope is much wider.

The company’s goal is to find out how an unmanned vehicle could move around on difficult terrain. How can it recognise trees, stumps, lakes, hills and pits? How can it safely overcome obstacles without hurting people? It would also have to perform tasks given to it, like putting out fires or ploughing land.

“It’s a completely new territory we’re exploring,”Milrem’s Science and Development Director, Mart Noorma said. “The only way to figure this out is by working closely with scientists and possible future consumers.” Noorma also works at the Space Technology Department in the University of Tartu.

Besides joining forces with rescue services, a city council, and with Estonian troops in Mali, Milrem cooperates with seven working groups from three universities: the University of Tartu, Tallinn University of Technology (TalTech) and the Estonian University of Life Sciences.

In the frames of the Smart Specialisation project, scientists together with Milrem Robotics received nearly two million euros from the EU in 2018. The aim of the four-year project is to develop an unmanned vehicle that is able to leave the familiar city environment and go off-road. The vehicle should be then able to sense the environment around it and be able to operate in a situation where the connection with the operator or GPS system may drop out. This could, for example, happen in a deep forest.

One of the key scientists involved is Hendrik Ehrpais, a researcher at Tartu Observatory Space Technology Department. Ehrpais, who is interested in space technology, is developing sensor processing algorithms together with his team, in order to locate Milrem Robotics’ robots as precisely as possible. Ehrpais is hoping to apply this knowledge in a space mission one day.

“The best way to improve something in science is through problems,” Ehrpais says. “Cooperation with Milrem gives us interesting challenges that we don’t usually see in a laboratory.” According to Ehrpais, the benefits of working for a real company also include more testing and making sure that the solutions will actually work in real life conditions. The algorithms Ehrpais’ team is working on will help Milrem’s self-driving vehicles to roll around in mines, fields or forests.

It sounds like a lot to expect from one machine, but actually, the vehicle – or the platform – itself, is basically the same. Only the tools integrated onto it differ. For example, a water or a foam tank with a pump would be installed in the robot for helping firefighters or a plough for cultivating the soil.

Marek Metslaid is a senior researcher at the Estonian University of Life Sciences. He specialises in forest disturbances like fires or storms. With bushfires sweeping through Australia and storms hitting the coasts of the US, it’s a hot topic lately.

Metslaid and Mart Noorma were intrigued by an idea of joining their two very separate fields of knowledge: robotics and forestry. Noorma proposed developing a robot that would take care of the forest that has been wiped out, a robot that would cultivate the land and plant trees by itself.

“It wasn’t just about us,” Metslaid said. “We were thinking of the upcoming researchers and PhD students at the university too. We would like our students to write their dissertations on topics that would overlap these two fields.”

Metslaid believes that companies offer scientists the chance to apply their knowledge in real life and for the actual benefit of the people, that their knowledge won’t only be collecting dust in university archives. In return, business brings new funding possibilities for the universities, just like Milrem received together with the scientists at the University of Tartu and TalTech.

From warfare to cleaning streets

In order to attract funding and adapt to the changes, Milrem has taken quite a different course from where it started in 2013. Back then, Milrem offered life cycle management to Estonian Defence Forces armoured and soft-skin vehicles. The company initially started creating unmanned vehicles for defence. Commercial applications were added only later when the company started involving people outside the military field. “We started looking into what else we could do with these unmanned robots,” Noorma said. “Together with our partners at universities and public offices, we realised that we could be helpful in automising many industries.”

For example, the company now also cooperates with the city council of Estonia’s second largest city of Tartu. Together with the council and other Estonian robotics’ companies like Cleveron and Click and Grow, Milrem Robotics recently submitted a project proposal to the European Commission. They want to start cleaning Tartu’s streets with unmanned vehicles next year. They wouldn’t be completely self-driving, however. The machine could follow a pre-programmed route and detect disturbances, but its movements would be observed by a human at the control centre.

The company follows a strict ethical code that has been part of its core values since the beginning. “Our robot is designed to save lives,” Noorma proudly says.

These ethical standards were noticed by the NGO Pax For Peace, an international peace organisation that analysed defence companies all over the world, listing them based on how ethical they were. The results published in the “Slippery Slope” report in November 2019 show that only four military companies in the world stand out as having the best practice.

Milrem Robotics is brought out as one of them.

Noorma explains that it’s because the most long-established defence companies are stuck in their old ways. Just like Milrem did, he believes that they will also change within a few years.