Back
engineering and technologynatural sciencesNews 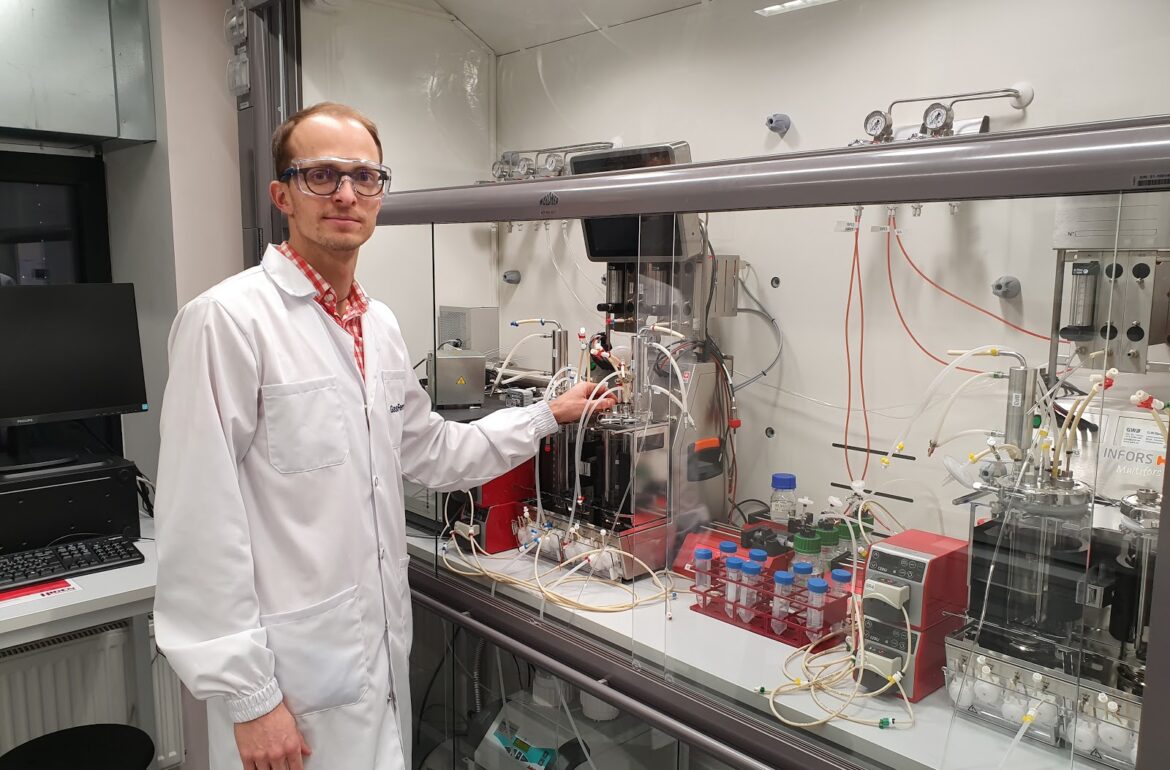 A Tartu laboratory brings new hope for a greener future by transforming harmful gases into eco-friendly fuels, materials and chemicals.

There is too much carbon dioxide (CO2) in the atmosphere and too much waste piling up in the world. At the same time, the need for sustainable production of fuels and chemicals is growing. These are some of the greatest challenges our planet is facing. It’s clear that we need to stop living in excess, but that’s not the only solution.

Scientists are working hard to tackle the climate crisis with this disruptive technology: gas fermentation.

This technology brings new hope for environmentalists, scientists, and well, the entire humankind. It’s a process where harmful gases like carbon monoxide (CO) or CO2 are converted into natural substances.

It’s about creating something useful out of something seemingly useless and it is believed to change industry and society.

Around the world, a few scientists and companies are experimenting with the idea. For example, the US biotechnology company LanzaTech is turning waste into fuels and chemicals. In Colorado, a beer factory Denver Beer Co is trying to transform CO2 into a commodity that can be sold to cannabis firms, restaurants and tap rooms. The Finnish company Solar Foods is making food out of thin air by converting CO2 and renewable hydrogen into protein.

Estonian scientists are now also working on gas fermentation in a newly established state-of-the-art laboratory at the University of Tartu, in the second largest city of Estonia. The facility was created by the Estonian scientist Kaspar Valgepea, a Senior Research Fellow at the University of Tartu, and it’s so rare in the world that you could count similar laboratories on one hand.

Valgepea and his team don’t concentrate on anything specific like the gas from steel mills or capturing atmospheric CO2. Instead, the focus is more generic: on finding cutting-edge solutions that could actually be used. They test different gas mixes, environmental conditions and bacterial strains. “Our job is to mimic actual situations and see what happens. We are searching for solutions for the humankind,” Valgepea said with a smile.

Valgepea got interested in gas fermentation when he resided as a Postdoctoral Research Fellow at the University of Queensland – one of top 50 universities in the world. There, in Brisbane, in the Australian Institute for Bioengineering and Nanotechnology, lies Australia’s only gas fermentation facility.

During his postdoc in the capital of Queensland, Valgepea also worked closely with LanzaTech, one of the hottest biotechnology companies, headquartered in the United States. The young scientist, together with a team of about a dozen members from the University of Queensland and LanzaTech, engineered a bacterium, Clostridium autoethanogenum, to make bioplastic from waste gas. The end product was a biodegradable plastic that breaks down within 40 days and is harmless to nature.

Valgepea returned to his home country Estonia a year and a half ago and brought his unique knowledge with him. The 36-year-old continues his collaboration with LanzaTech and with the Australian lab, which is remarkable as working with non-EU partners is not usually easy for an EU-member because of limited funding opportunities.

Valgepea has also been in touch with local Estonian companies like a wood pellet producer Graanul Invest and a paper company Estonian Cell. Working with the industry is absolutely vital for a scientist, and Valgepea understood that in California, in the United States, where he was a visiting scholar in another leading biotechnology company Genomatica from 2012 to 2013.

This experience gave him the rare inside glimpse of how cutting-edge biotechnology is developed towards a commercial process. Understanding how the rather secretive biotechnology industry actually operates on a daily basis is not easy to achieve without being directly involved. Ideas that may look great in a lab may not be applicable at an industrial level and scientists may end up wasting time creating something that will never be put to use.

For now, most of his time has gone to setting up the Tartu lab and the team from scratch. Valgepea hired six people, and most of them from abroad. Estonians, he noticed, are often too shy to apply. If they don’t fit all the criteria listed, they wouldn’t dare to give it a shot. “Recruiting people for the team has been challenging,” Valgepea admitted.

Valgepea was able to create the lab as a European Research Area (ERA) Chair holder. This action was created by the European Commission to help bring sustainable structural changes to the universities or research organisations by hiring outstanding researchers or research managers and their teams.

Estonian universities stand out in using this opportunity. The four biggest Estonian universities have received nearly 30 million euros altogether for bringing ERA Chair holders to their institutions. Estonia has received more funding for ERA Chairs than for any other project under the EU research and innovation programme Horizon 2020.

“Being an ERA Chair holder gives you extra credibility,” Valgepea believes. “ERA Chairs are mostly about making actual structural changes, and as a young scientist, it would have been difficult to do otherwise.”

Hopefully it will not only positively impact structures at the University of Tartu, but also bring us new ideas and solutions for a more sustainable living.