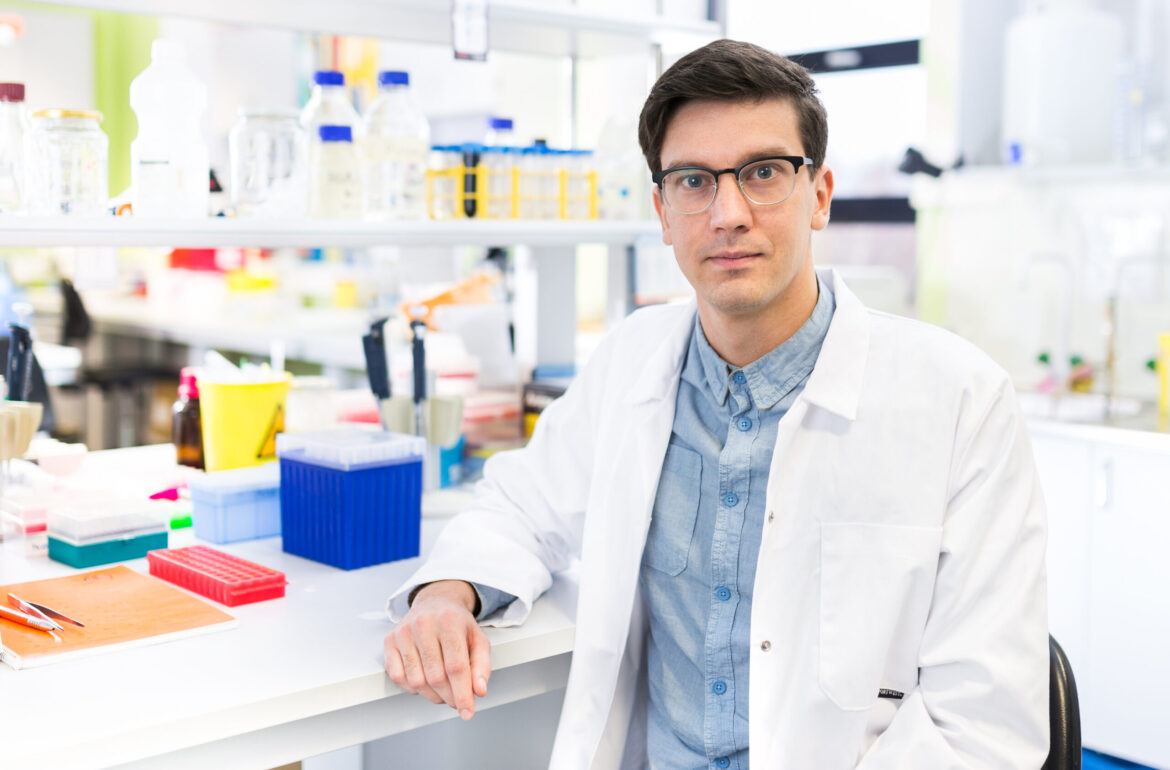 A senior scientist at Estonia’s leading synthetic biology laboratory, Petri-Jaan Lahtvee, believes that we can make anything out of living nature. And he created a laboratory that proves it.

Engineering nature is not a faraway future. Many of us have already tasted it. Coca-Cola Zero uses an extract from the stevia plant that has been converted into a sweetener.

Food supplements, medicine, biofuel, paint, even food! Engineered things created by scientists already surround us. And this is just the beginning. Lahtvee believes that most companies will be dealing with synthetic biology in a couple of decades. Those who are not getting it, will be lagging behind.

Lahtvee did his postdoc at a world-famous Jens Nielsen’s lab at Chalmers University of Technology in Sweden. It’s one of the biggest and most successful European laboratories, known for specifically focusing on yeast. It is one of the organisms we know most, Nielsen explained in an interview.

For instance, the team at the Swedish facility invented a way to create cocoa butter out of yeast. Demand for chocolate is growing, but cacao beans can only grow in some parts of the tropics. Therefore, why not engineer the sweets in Sweden instead! After all, you can make anything using yeast.

As scientists are working on finding solutions to a more sustainable and nature-friendly life, the big question is: how to replace the oil that is extracted from the ground? The solutions must be efficient, fast and cheap enough, because getting oil from the earth is easy. Too easy! Can bioengineering compete with the old traditional (and wasteful!) ways?

Lahtvee believes that sustainable bioeconomy is possible in Estonia, where at the moment, the energy and chemical production largely depends on fossil fuels, mainly oil shale. That’s partly why Lahtvee decided to return to his home country Estonia, with the help of a European Research Area Chair grant.

“Synthetic biology will affect everything: energy, medicine, the environment, a large part of the economy!” he said. “If we don’t figure out how to be part of it and offer our own solutions, we’ll lose one very important sector. If we’re not able to fix our own problems, we’ll have to depend on other countries and corporations.”

With his new team, he started working on his new laboratory in Estonia’s second largest city Tartu four and half years ago. Finally, they can pick the first fruits of their labour.

Estonia has a significant wood processing industry. This makes Estonia a great place to experiment with this material, but also find ways to create more value. Lahtvee’s team found a way to make most of the wood that is already being processed anyway.

The team collaborates with Europe’s biggest wood pellet company Graanul Invest. It’s an Estonian firm based in the capital Tallinn. Instead of burning the pellet, they extract sugars from wood waste and use it as “food” for non-conventional yeast. Lahtvee’s team is investigating options to turn them into oil that can be used in many ways – converted into biofuel, paint, lubricant, food or medicine. Otherwise, these sugars would be lost without making use of them.

Lahtvee’s laboratory partnered with top laboratories and universities around the world and collaborates with companies. The main goal from the beginning has been to create solutions that can be used in real life, and would not just stay between the white walls of their lab.

“We have an international, quite young and ambitious team,” Lahtvee proudly exclaimed. A Brazilian research fellow Nemailla Bonturi joined Lahtvee’s laboratory three years ago when the lab was still being set up. She moved to Estonia from a Brazilian city near Sao Paulo only to join his team. “It was exactly what I was looking for,” she said.

Her PhD in Brazil focused on finding ways to make use of non-conventional yeast. There is not much knowledge about this yeast. At least not as much as we know about the baker’s yeast that people have been using for centuries. She brought her knowledge to Estonia and now mostly focuses on this. “It’s been great!” she said. “Tartu has become my second home.”

Big steps in a small country

Lahtvee’s journey with biotechnology started at the Tallinn University of Technology in 2003. As a Bachelor’s student in Applied Chemistry and Biotechnology, his professor was Raivo Vilu, one of the leading biotechnologists in Estonia. Vilu was awarded the prestigious DuPont Nutrition and Health Science Excellence Medal in 2017.

Vilu always told his students that they will be given a role of God’s assistants when they work with him. Which 18-year-old wouldn’t find this idea attractive? Vilu inspired his students to look for challenges and try things out. Lahtvee still remembers his inspiring lectures.

Estonia joined the European Union in 2004 when Lahtvee was only a second-year student. The EU backed Estonia’s science investments and the government was able to establish eight technology development centres. One of them is the Centre of Food and Fermentation Technologies that Vilu is leading up to today. He set it up together with his students, and one of them is Lahtvee. This gave his young students a very rare opportunity to apply the theory they were studying in classrooms very early on. “They were immediately pulled into this carousel!” Vilu said laughing.

Estonia advanced in biotechnology early on. The challenge now is to keep up with the pace. Lahtvee believes that biotechnology can reshape Estonia’s economy, and it can happen very soon. His work has proven that within only four years, you can offer real new solutions.

European Research Area (ERA) Chair action was created by the European Commission to bring structural changes to universities and research institutions in the “widening” countries, most of them Eastern European. Estonia is one of the countries that can apply. The idea is to break through the old ways of thinking and science management, to be able to face the new challenges of the 21st century. The old institute and faculty structures may not be an ideal platform to develop technologies to fight global warming, mitigate carbon crisis, and introduce biotech solutions to achieve biosustainability. With the help of the ERA Chair SynBioTEC project, the Estonian Centre for Biosustainability research centre was established. It unites research labs and core facilities, as well as training programmes and curricula from different institutes of the University of Tartu.