A new nanomaterial could kill coronaviruses 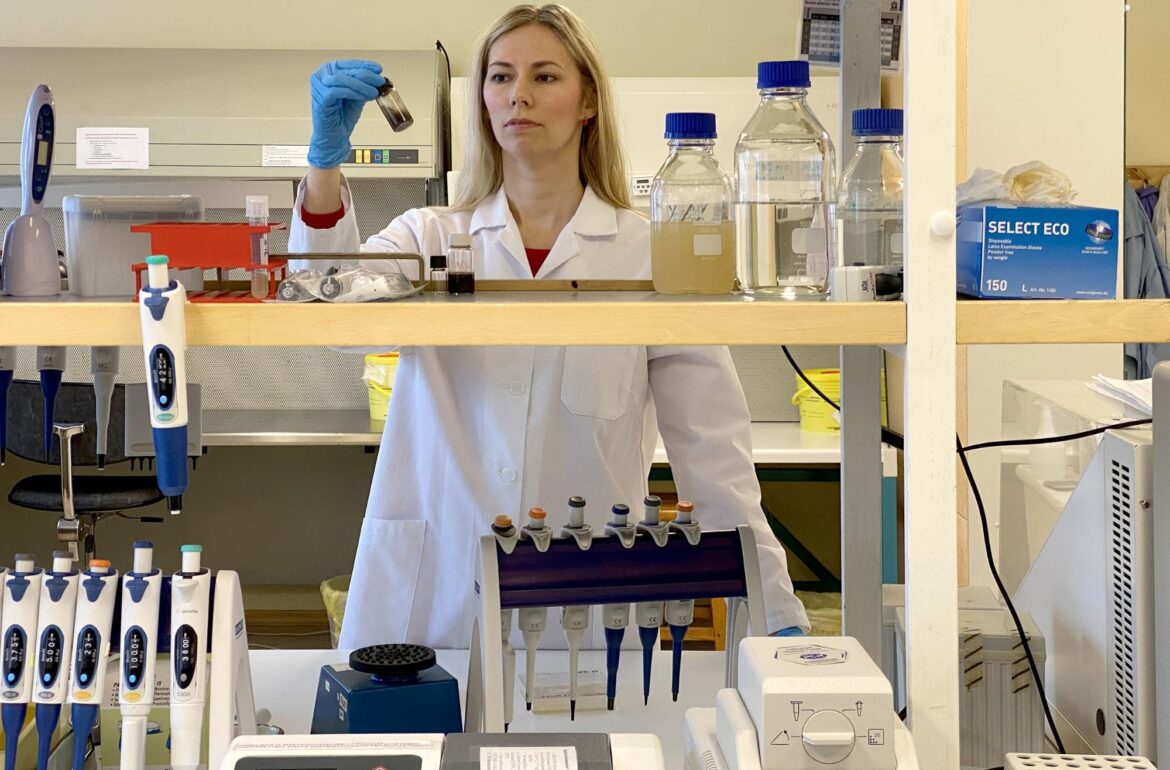 Nanoscience is offering a surprising glimmer of hope in the context of the coronavirus pandemic. Photo credit: Ilja Makarenkov
Share

Estonian nano scientists are working on a substance that could get rid of Sars-cov-2 particles within hours.

In a lab in a suburb of Tallinn, the capital of Estonia, nanotoxicology expert and microbiologist Olesja Bondarenko carefully lifts a little glass jar with black liquid. It looks like paint, but can do much more than dye textile, which, by the way, it is able to do as well, if used in the right concentration. This nano solution kills bacteria, and most possibly also coronaviruses.

When incorporated into textile or surfaces like doorknobs and door handles, this material could kill half of virus particles within one hour.

We are in Estonia’s National Institute Of Chemical Physics And Biophysics where scientists are testing and trying their novel ideas. Nanoscience is the study and application of extremely small things, either applied in chemistry, biology, physics, materials science, or engineering.

Specializing primarily on antibacterial nanomaterials, Bondarenko is currently working on bringing together more experts – including virologists – to study the antiviral properties of their nanomaterial and create nano-containing masks. The virus, as academic literature suggests, spreads mainly through breathing. Therefore, her invention could be more effective on masks than on surfaces such as doorknobs.

Antiviral nano masks could be a good alternative to the regular textile masks. Nanoparticles can resist several washes. Therefore, they would be reusable, and, at the same time, not much more expensive than the masks that are available in shops today, Bondarenko believes.

Esfil Tehno, manufacturer of protective masks based in the northeastern Estonian city of Sillamäe, is already on board with the idea. Their unique electrospinning technology would allow them to easily integrate nano substances into the fibre.

“We have thought about upgrading our masks with antibacterial or antiviral protection a long time ago,” said Araik Karapetian, CEO of Esfil Tehno. “We know that it’s doable in our factory.”

Karapetian believes that, for a fair price, customers would be interested in antiviral face cover. “By now, people are educated enough about different types of masks and expect better protection,” Karapetian noticed.

Bondarenko’s team consists of two more nanoscientists: Anna-Liisa Kubo and Grigory Vasiliev. The latter also works as an infectious disease specialist in one of the leading hospitals in the North Estonian Medical Centre.

Ten years ago, Bondarenko started studying antibacterial properties of nanomaterials. During multiple tests, the team discovered a substance that is especially efficient in killing a wide range of microbes.

It was proven that the material kills many bacteria, but no conclusive information is available for viruses. Yet. The testing with viruses still needs to be carried out. Bondarenko is positive, however, because academic literature suggests that the same components that are found in their nano substance do kill coronaviruses like the Middle East respiratory syndrome (MERS) and severe acute respiratory syndrome (SARS). So, the chances are high that the same also applied to Sars-cov-2.

“Our material is quite universal, because it kills living cells really well,” Bondarenko said. “There are several components in our material that have been tested with coronaviruses and have been found to effectively kill them.”

But with such a novel virus as Sars-cov-2 testing will understandably take some time. Partly because there currently aren’t any appropriate high safety level labs in Estonia to work with the actual virus. Presumably, the situation will change soon.

One of the key issues of using nanoparticles in masks is safety. It’s dangerous to breathe in nanoparticles as they can be toxic for the lungs. Bondarenko’s team wants to avoid it by binding particles tight inside the mask fibres.

Are nanoparticles generally safe? Bondarenko spent years of studying this question together with her mentor Anne Kahru. In 2013, they showed that metal-based nanoparticles are not as dangerous as previously thought when dissolved. The nanoparticles weren’t significantly more toxic than the ionic compound (salt) they were made of in the first place. The toxicity, they saw, depends on the degree of dissolution.

Many European Union lawmakers then used their ground-breaking study to regulate the growing field of nanoscience.

This reminded Bondarenko why she became a nanoscientist in the first place – to be part of the revolution. There are endless application possibilities for nanoscience. Nanotechnology is being used in cancer treatments, in aviation, in environmentally-friendly colouring and so on. “I wanted to do something practical,” she explained.

Helping stop the pandemic, hopefully, is practical enough for this ambitious scientist because this liquid Bondarenko is holding could be a real game changer.