New skin-like robot could turn us into superhumans 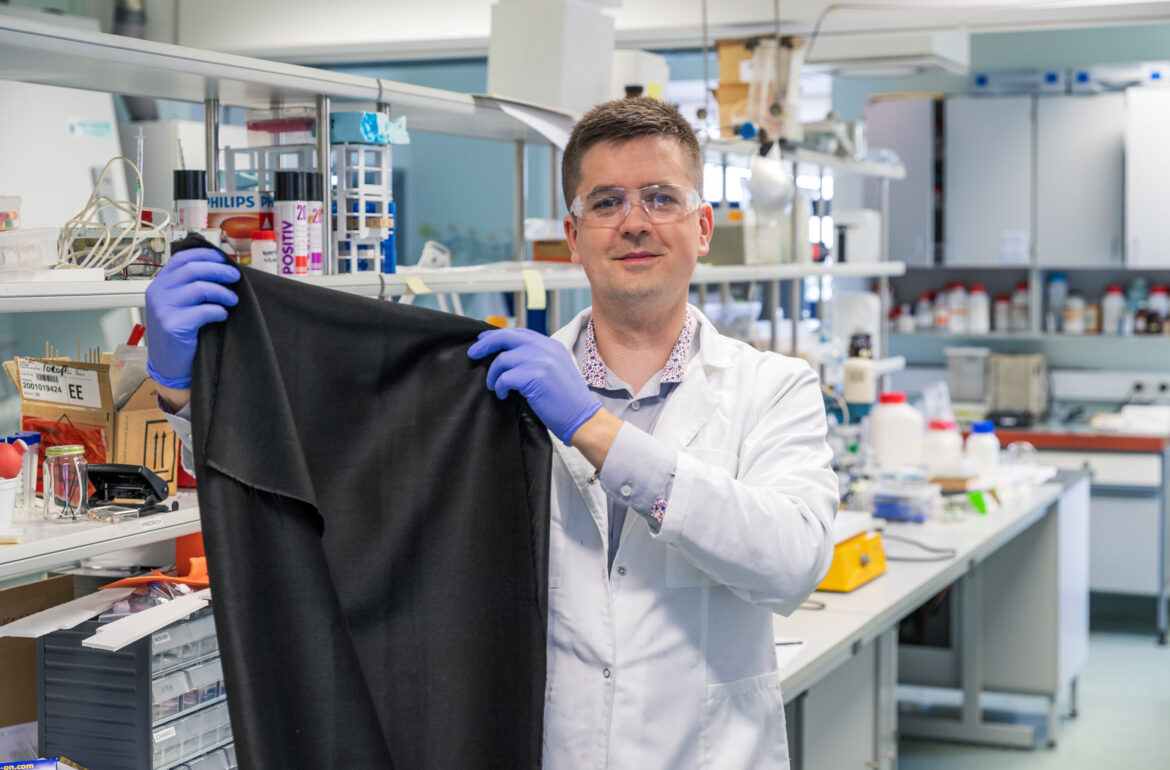 Inspired by nature, roboticist Indrek Must is working on a wearable robot made of textile.

Nuts, bolts, and lots of cables. That’s what most people imagine when they think of wearable robots.

These external skeletons are usually created to protect and support people with disabilities. They help them stand up and walk, or just make people stronger. Many start-ups are making them, but none have really reached a wider market yet.

But a Tartu University roboticist Indrek Must is working on something even more exclusive, and as he believes, more efficient in the long run: a three-layer textile, as thin as human skin, that people could wear one day.

A patient with moving difficulties could zip it up like an overall and walk to work one day.

Textile is great for this, because it can’t hurt people. Soft material is also more intuitive and comfortable than wearing metal parts on your legs and arms like a science fiction character. Or like Must likes to emphasize, textile is simply more natural.

“Whenever I have questions, I always look for answers from nature,” he admitted.

Smart textile made of natural substances

At the moment, Must is focused on developing the material cell-by-cell in his lab. In the long run, it should turn into a whole exoskeleton.

“I’m creating the most primitive intelligence on a material level,” explained the scientist, who completed his post-doc at the Istituto Italiano di Tecnologia.

Each cell acts semi-autonomously just like in the skin. It’s like they have their own microscopic brains that follow the commands that have been previously programmed. They have the information about which movements should be expected in any specific situation. The material would then behave in a certain way by helping the patient lift their leg or boost their jump.

The cells would only need a small impulse by the person wearing the material.

The key to success in robotics is the connection between those tiny brains, or cells in this case, Must explained. As textile has fibres that bind many identical elements together, it turned out to be a great material for robotics. It creates a bendable structure that can wrap itself around a limb and help out a fellow human.

Must made his name as one of three members of a research team that developed the first ever soft robot that mimics plant tendrils at the Istituto Italiano di Tecnologia. This robot is able to curl and climb, using the same principles of water transport found in nature. These principles determine the movements and the ability to change from a flexible state to a rigid one just like plants.

The team’s invention highlighted the potential of plant-inspired technologies for developing soft robots based on biocompatible materials, and the news went viral all over the world.

The good news is that soft robotics scientists don’t really have to invent a wheel. There is already lots of knowledge available about biological structures. A surprising challenge, however, is “translating” these biological terms into something that roboticists could understand, Must said. Who would have thought that robots and plants have so much in common?

But making robots natural is not just Must’s personal obsession. Robots interact with humans ever more closely and it’s only natural that scientists need to adapt to these new needs. The assistive or supportive robots are pressed against the patient’s skin, sensing and acting on behalf of them. Robots are not only seen as separate entities anymore, like the delivery robots or self-driving buses. They are literally coming closer to us.

Robots that enhance us and – hopefully – make us better as humans are gaining ground.

Therefore, wearable robots are the new hit in the robotics world and growing fast, both in the medical sector, as well as in defence and other industries.

Nevertheless, they still typically look like traditional machines, because most roboticists have a background in engineering and mechanics, who think in terms of nuts and bolts.

But things are changing. Instead of trying to make humans look more like robots, the growing tendency is to make robots look more natural, more like us.

Instead of a welding machine, Must’s main tools are textiles, soft gels and plants he has covered his balcony with. He comes from a different background too. Instead of engineering, Must has studied materials science.

After receiving the Returning Scientist’s Grant by the Estonian Research Council in 2017, Must returned to his home country Estonia from Italy, one of the world-leading soft robotics centres.

With the help of natural robots, Must is now on a quest to create a fairer and more equal world where disabilities won’t matter.

And just for pure fun, his robot could make people that don’t necessarily need it for essential movement, feel like superhumans. For a guy who gets his inspiration from plants and toy stores, Must surely wouldn’t mind hopping into his robot garment and running to his Tartu lab in superhuman leaps ten years from now.