The theory of dyadic morality explains the logic of Zande witchcraft 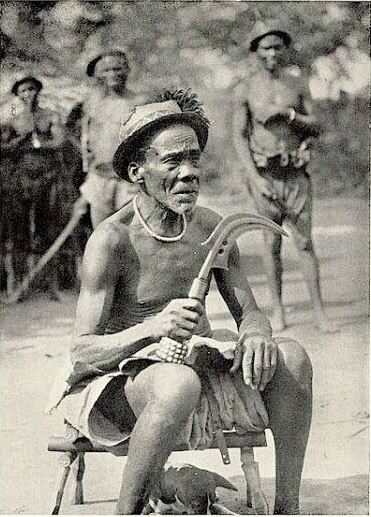 A prince's deputy at the court of Rikita. He holds a deputy's knife of office. Photo credit: Clarendon Press
Share

The associate professor of Middle Eastern History of Religions at the School of Theology and Religious Studies in the University of Tartu, Amar Annus, published a paper that builds a bridge between modern social psychology and historical anthropology.[i] As the paper demonstrates, much of the anthropological account about Zande witchcraft in southern Sudan written by E. E. Evans-Pritchard (1902-1973) can be explained using the theory of dyadic morality.

In 1937, the British anthropologist Sir Edward Evans-Pritchard published Witchcraft, Oracles and Magic among the Azande, based on twenty months of fieldwork across three expeditions from 1926 to 1930 in Anglo-Egyptian Sudan. Evans-Pritchard’s book was an important landmark in the studies of magic and witchcraft and is widely regarded by scholars as an anthropological masterpiece. Evans-Pritchard demonstrated how beliefs related to witchcraft form a coherent whole in the Zande culture by ordering human conduct with a system of values. This book has been often cited in academic discussions about human rationality, especially in the context of the philosophy of science debates during the 1960s and 1970s involving e.g. Thomas Kuhn and Paul Feyerabend. The book has provoked a philosophical debate whether logical thinking can be culturally relative.

However, as Evans-Pritchard himself has stressed in many of his writings, in order to understand other cultures, a correct translation is necessary. Amar Annus, who investigates the cognitive foundations of witchcraft beliefs found that the theoretical model recently developed in the domain of social psychology well explains the logic of Zande witchcraft. The theory of dyadic morality predicts many phenomena in Zande witchcraft with a relatively parsimonious framework. This theoretical model about mind perception and its connection to human morality explains many Zande customs and offers new perspectives for understanding witchcraft beliefs worldwide.

The experimental survey conducted at the University of Harvard investigated the dimensions of mind perception in folk psychology, which comprised 2,399 participants with a mean age of 30.44 years.[ii] The exploratory factor analysis of the data collected established two dimensions of mind perception: 1) experience, which is the ability to be conscious and to feel (e.g. hunger, pleasure, fear); and 2) agency – the ability to do things, e.g. capacities for self-control, memory and moral action. These two dimensions were found to relate to how the human mind perceives morality – the moral agent is perceived to possess agency and the moral patient is regarded as being rich in experience. The distinct categories of moral agent and moral patient were further found to be complementary and mutually exclusive. The complementarity of the roles of moral agents and patients explains the automatic tendency to complete moral situations dyadically by finding agents whenever a moral patient is identified and vice versa.

The definition of dyadic morality insists that “this harm-based cognitive template functions intuitively and is rooted in innate and evolved processes of the human mind; it is also shaped by cultural learning, therefore allowing cultural pluralism”.[iii] The dyadic morality theory can explain the emergence of witchcraft accusations from the perceptions of harm, the dyadic completion of moral situations and the phenomenon of moral typecasting in Zande culture. For example, the close association of witchcraft with harm perception and morality among Azande explains why people whose behaviour is least in accordance with social demands are regarded as potential moral agents who can harm others and consequently are more often accused of witchcraft. Recent investigations into dyadic morality have found that not only is a suffering patient prone to search for a responsible moral agent, but also an immoral agent is expected to harm a victim according to the implicit logic of dyadic completion.[iv]

According to Zande doctrine, a person who experiences harm from a misfortune or sickness spontaneously constructs himself/herself as a victim of witchcraft and subsequently completes the moral dyad by finding the witches. This is in line with dyadic morality, whereby the person turned into an isolated patient when perceiving harm has the automatic tendency to search for a responsible moral agent. This is called agentic dyadic completion. The mutual exclusivity of the perceptions of moral agency and patiency explains why Azande believe that witchcraft cannot make people break moral rules – to lie, to steal, to commit adultery, and to break taboos. The Zande doctrine of witchcraft cannot be used to exculpate failings against moral norms and values. In such cases, the perpetrator is immediately regarded as the moral agent who cannot assume the role of a moral patient. When a taboo has been broken, witchcraft cannot be indicated as the cause. For example, if it is known that the parents of a child had sexual relations before it was weaned, the question of witchcraft does not arise if the child becomes sick or dies.

According to the Harvard study of mind perception, adult humans are perceived to possess high levels of both agency and experience, whereby they qualify both as moral agents and patients. The same study found that animals and children are perceived to have as much experience as adults but less agency. When translated into the idiom of witchcraft, this finding would indicate that children and animals cannot be witches, an assumption that is well corroborated in Zande communities. Evans-Pritchard wrote that children and animals are normally free from any suspicion of witchcraft.

Dyadic morality further explains why all male members of a clan cannot be witches. The Azande have an elaborate theory about the heredity nature of witchcraft abilities believing that it is a substance in the bodies of witches that is inherited from mothers to daughters and from fathers to sons. As all the tribes of Azande consist of people who are relatives to one another, their beliefs about heritability must lead to the conclusion that all men in a male witch’s clan are witches. However, the Azande do not accept this conclusion as Evans-Pritchard wrote. The question of whether Zande reasoning is different from the Western logic evaporates when their witchcraft beliefs are considered in the context of dyadic morality with its automatic tendency to dyadic completion of moral situations. A case of witchcraft always involves two parties, therefore everybody being a witch goes against Zande intuition. Only a certain part of the tribe can be witches at any given time because another segment must represent their victims. Entire clans cannot consist exclusively of witches because members of the same tribe can bewitch one another. The Zande logic appears to be fully coherent with the theory of dyadic morality and eventually not different from Western logic.