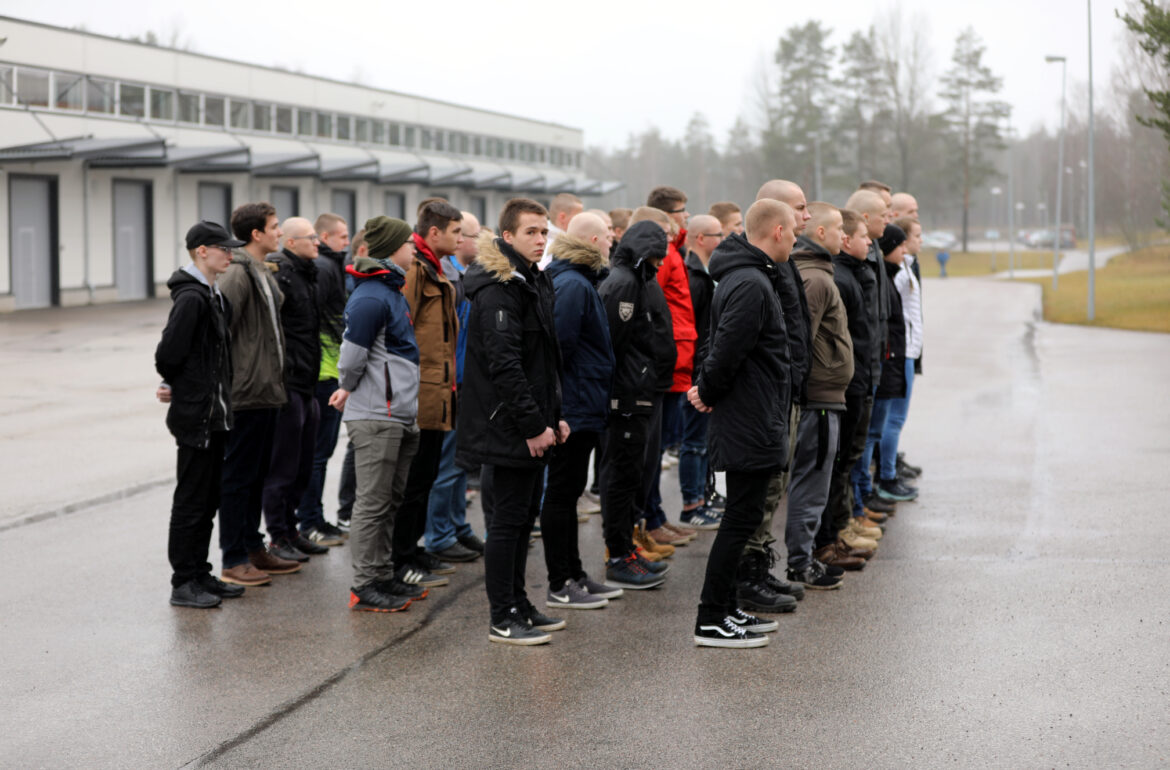 Conscripts lining up on their first day at the service. Photo credit: Estonian Defence Forces
Share

Many of our problems come down to vitamin D deficiency, concludes orthopaedist and researcher, Leho Rips, after studying Estonian conscripts for years.

After a long dark winter, all young Estonian men have vitamin D deficiency, and that can have some serious consequences. This is what Rips concluded from his study involving around a couple of hundred male conscripts (not enough women are enrolled to be able to include them in the study).

Estonia is one of the rare European countries where all men have to join the military service. Usually, they enrol right after high school, in their prime health. Or at least, one could presume that they are fit.

The reality is grim, since around half of those expected don’t even make it to the army. In 2019, only 40% were healthy enough to join the service! In the same year, seven per cent dropped out during the service only because of health issues. Inevitably, many try to simply wriggle out of the 8 or 11-month long commitment, and therefore paint an uglier picture of their health to the medical commission. It is not an exaggeration. By observing conscripts for around a decade, Tartu University scientist and orthopaedist Leho Rips has found that young men are getting weaker.

The most common problems are poor physical performance, depression (or other mental disorders), being more receptive to viruses and flu, breaking bones and problems with joints.

Rips was curious to find out what unites all these health issues; so curious, in fact, that he is dedicating his Tartu University doctoral thesis to the topic.

We are not made to spend lives indoors

From various studies Rips and his colleagues have done so far, they can conclude that poor health could often come down to vitamin D deficiency. “Vitamin D is one real and measurable outcome, a concrete answer,” Rips said. “When someone breaks their lower limb bones during a long-distance trek during military service – and it happens! – they will almost certainly have vitamin D deficiency.”

Vitamin D acts like a hormone and helps the body absorb calcium and phosphorus, which are both important for building bone. Studies have shown many other benefits too. Current evidence even shows a connection between Vitamin D deficiency and the severity of COVID19.

Rips sums it all up in one sentence: “We are not made to spend most of our lives indoors.”

Even Southern Europeans are now struggling with vitamin D deficiency, Rips said, because they move between their homes, offices and cafes in closed vehicles, barely ever seeing the sun. Even exercising is often done indoors. In addition, although sunscreen helps prevent skin cancer, it also prevents the assimilation of vitamin D. It’s also a poor diet that has brought us to this modern pandemic.

But even if we were to eat fish every day and have long walks, it wouldn’t be nearly enough. “If we wanted to get enough vitamin D, we would have to spend all day, every day, outside,” Rips said. Which is impossible for most people.

Therefore, with our urban lifestyle, people should be taking plenty of vitamin D supplements, Rips claims.

Scientists disagree on how much exactly though. Vitamin D deficiency is a very location-and-lifestyle-dependent issue, it requires local, continuous studies. An amount that may be enough for Italians may not work for Swedes. Just like in most countries, there is a big gap in the data in Estonia too, but Rips has his mind set to change that.

Levels can vary in different countries, but Rips considers “a critically low” vitamin D level anything below 25 nmol/l, between 25 and 50 nmol/l simply as “deficiency”, and between 50 and 75 nmol/l a “satisfactory” level. Anything above 75 nmol/l is within the norm.

Even by summer, when the sun exposure should be much higher, things looked quite gloomy: only every fourth young man had their vitamin D levels within the norm (above 75 nmol/l). “That’s when the young men should be spending time outside, but what we saw is that it’s sadly not happening,” Rips said.

In another study Rips and his colleagues conducted in 2016 and 2017, one group was taking the recommended amount of vitamin D supplements while the others were not. The recommended level at that time in Estonia was 1200 IU (or 30 mcg) a day.

Even then, the group that did take supplements only managed to keep the level they had in autumn, and not increase it. They will conduct a new study with the daily vitamin supplements of 4000 IU this year.

Inevitably, our lives have changed. “We seem to be in some sort of a transition,” said Ahti Varblane, Leho Rips’ colleague and manager of the Health Board’s Crisis Centre of the Estonian Military Academy. On one hand, most Estonians don’t need to plough the field or throw manure like their ancestors. Meaning, they don’t necessarily have to spend all day outside. On the other hand, they do try more and more – people are increasingly working out outdoors, just not nearly enough yet.

Though vitamin D seems to affect everyone and in many ways, it does not seem to get the attention it deserves. Vitamin D tests are not usually done when someone gets injured or is feeling weak. The Vitamin D level is not even measured upon enrolment in the army.

Varblane hopes that it will change in the future and vitamin D will be more embedded in the everyday life of the conscripts.

For the moment, there are still many knowledge gaps. To be on the safe side, Rips shares his standard advice to his patients: move every day in fresh air (swimming and sweating in gyms does not count!). Forget about the 10000 steps. According to Rips, nature intended us to move 15 to 20 kilometres every day. Avoid eating processed foods, eat fish and fresh food instead. And finally, of course, take vitamin D supplements.