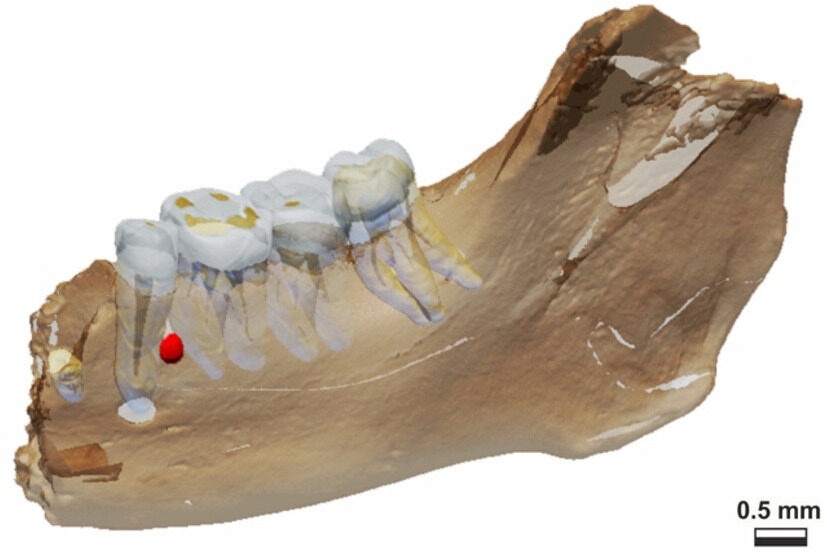 A study that appeared yesterday on Current Biology sheds new light on the continental migrations which shaped the genetic background of all present Europeans. The research generates new ancient DNA evidence and direct dating from a fragmentary fossil mandible belonging to an individual who lived ~17,000 years ago in northeastern Italy (Riparo Tagliente, Verona). The results backdate by about 3,000 years the diffusion in Southern Europe of a genetic component linked to Eastern Europe/Western Asia previously believed to have spread westwards during later major warming shifts.

“By looking into the past of this particular individual, who was one of the first settlers of the southern Alps after the Last Glacial peak, we found evidence that the previously documented genetic replacement which changed the makeup of Southern European Hunter Gatherers started at least 17,000 years ago,” said lead author Eugenio Bortolini (University of Bologna), “much earlier than we previously thought, and in a very different scenario”.

The ancient genome obtained at Riparo Tagliente is in fact of particular importance, “since it supports the persistence of exchange networks and the movement of people across southern Europe immediately after the Last Glacial Maximum, well before the onset of much warmer climatic shifts,” said Luca Pagani (University of Padova and Institute of Genomics of the University of Tartu), co-first author of the work.

This individual, whose half-mandible had been found at Riparo Tagliente in 1963, shares genetic affinities with an Iberian individual who lived up to 19,000 years ago, and maternal and paternal genetic affinities with southern Italian and European individuals who lived around 14,000 years ago, suggesting that population movements may have spread these genetic variants in Southern Europe even before the occupation of Riparo Tagliente, and may have been intermittent but persisting during colder phases. “Direct dating of human fossils is once again critical to disentangle and interpret complex archaeological contexts”, adds Sahra Talamo, co-author of the study.

The analysis of the mandible also allowed the authors to unveil some details concerning this particular settler of Riparo Tagliente: “The fragment belongs to a young male affected by cementoma, a quite rare anomaly in the development of dental tissue” adds Gregorio Oxilia, co-first author of the study, “and might shed light on the distribution of such conditions in pre-Neolithic societies”.

“This finding opens important questions concerning the role and impact of population movements on the major cultural transitions documented by archaeologists in Southern Europe” concludes Stefano Benazzi, senior author of the study, “some of which temporally coincide with the date emerged for the individual found at Riparo Tagliente. Future research will dig more into these new hypotheses concerning the ancestry of modern Europeans”.