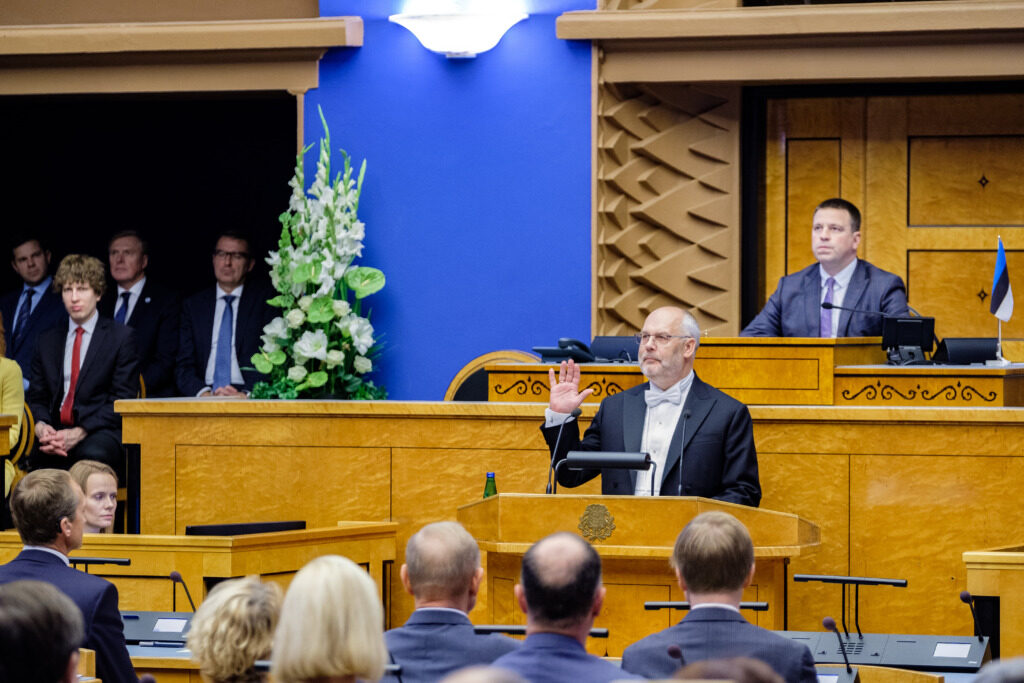 President Alar Karis at the inauguration ceremony at Riigikogu on October 11, 2021. Photo Credit: Office of the President of the Republic
Share

The newly elected Estonian president Alar Karis was once a top developmental biologist.

One could expect the sharpest minds to lead nations. Having a PhD may not be a sign of ultimate wisdom, but it’s an indicator that the person has read a few books – not a bad attribute for a president.

Yet, throughout history, presidents with an academic background have been rare.

Only one president of the United States, Woodrow Wilson, had a PhD. The minority of current European state leaders have the highest academic degrees. Most famously, perhaps, Germany’s chancellor Angela Merkel. Austria’s president Alexander van der Bellen, who, by the way, also has Estonian roots, has a PhD in economics. Both Italy’s current Prime Minister Mario Draghi and President Sergio Mattarella have completed their dissertations. These are just some examples, the list is longer, and Estonia’s president can now also be added to it.

The media has described Alar Karis as a charismatic leader, but what were his scientific achievements before taking over the country’s first position?

Working with the best gene scientists

After defending his dissertation at the Estonian Institute of Veterinary Medicine and Animal Science he felt like “unicellulars had been studied enough” and wanted to focus on something more “novel”, as he once told the Estonian news outlet Delfi in an interview.

Karis continued in molecular biology when he joined the Estonian Biocentre. At the beginning, he worked on a vaccine for calves.

When Estonia regained independence in 1991 and the borders finally opened up, it was common for scientists to go abroad and expand their knowledge. So did Karis together with his wife Sirje Karis and their children.

The future Estonia’s president studied in Hamburg University’s Medical Faculty as a visiting scientist for a year, focusing on human ribosome protein structure and function. He then earned a prestigious Royal Society scholarship for a postdoc in London’s National Institute for Medical Research – now part of the Crick Institute – where he joined a research group led by a legendary molecular biologist Frank Grosveld.

Grosveld was offered a new laboratory in the Medical Faculty in Erasmus University Rotterdam, and he only asked a few people to join him. Karis was one of them, getting a principal position in the lab.

“He grew out to be one of the senior postdocs and was very much appreciated by his colleagues, some of whom are still in touch with him,” Grosveld told Research in Estonia. “I remember him as a very good scientist with an excellent sense of humor.”

The research group worked on gene technology that targets specific genes to inactivate them. In that way, they could learn about the functions of the genes throughout the lifecycle.

Their testing subjects were mostly mice, which are considered like pocket-sized humans. About 95 percent of the mice’s genes are identical in sequence to ours. Mice also have the same organs as humans.

His research team, which published 18 scientific articles together, discovered that the GATA3 gene plays an important role in the nervous system and in the ​​production of fetal blood cells.

They published their findings in one of the best-known scientific magazines, Nature Genetics, which made Karis “Estonia’s top scientist at the time”, said Raivo Raid, a developmental biologist at the University of Tartu.

“His research group was one of the best in the world at the time,” added Estonian geneticist Andres Metspalu. He believes that every success story in science is built on the work of many others. “Their work certainly played an important role in gene technology,” Metspalu said.

Some ten years later, in 2007, this gene technology received the highest recognition when three scientists, two Americans and a Britt, won the Nobel Prize in medicine for working on the same technology helping to establish the roles of individual genes in health and disease.

When Karis – together with his wife and three children – returned to Estonia in 1996, he brought the new “knockout” technology and know-how with him and formed a new research group in his home country.

“For Estonia’s gene science, this started a new era,” believes Tambet Tõnissoo, who was a student in Karis’ lab at the time.

Karis and his research team developed Estonia’s first knockout mouse model, with an absence of the RIC8A gene. They discovered that the RIC8a is indispensable in early mammalian development. This gene, they saw, is also an important player during nervous system development. The deficiency would lead to neuromuscular defects, growth retardation, impaired coordination and balance, abnormal heart beat, neural migration and even postnatal death, as brought out in their articles in 2013 in PLOS One and in 2015 in Developmental Neurobiology.

“They were the first group in the world to show the importance of the RIC8 gene in mammals,” said Tõnissoo.

Sulev Kuuse was the first scientist Karis taught after returning from the Netherlands. He spent long hours sitting next to Karis, looking through the microscope. “This technology requires a tough bottom and tough nerves,” said Kuuse jokingly.

Even though the “knockout” gene technology was extremely expensive, especially for a young emerging economy, Karis found funding for it. Being a scientist and knowing his field certainly helped, Kuuse believes.

As a developmental biologist he had a broad view of science. He never solely focused on one narrow subject, his former colleagues recall. Karis also had a great ability to bring together scientists from various fields, like zoology and molecular biology.

Karis soon became the head of the University of Tartu Institute of Molecular and Cell Biology and implemented a new leading style he experienced in Western Europe. He held meetings to make sure everyone’s voices were heard and even asked young doctoral students for their opinion, which was unheard of in 90s Estonia. Tarmo Annilo, one of the PhD students in his institute, also remembers how Karis’ view to scientific problems had a wider grasp and how he expected better results, based on his modern standards.

Grosveld visited Karis in Estonia a few times up to the point where Karis had already become the rector of the University of Tartu in 2007.

Karis’ ex-colleagues and students rejoiced when they heard Karis would be Estonia’s next president. A scientist’s fact-based, rational way of thinking would benefit everyone in times of uncertainty, they believe.

Grosveld sent him a message to congratulate him. “He responded immediately in his typical modest way,” a Dutch scientist said.

Karis has a wonderful ability to approach anyone with an ease, either a farmer behind a village pub or a Cambridge scientist, often throwing witty jokes in his conversations, his former colleagues and students recall.

At the end of the day, he most values the power of grounding facts, President Karis told Research in Estonia. “A scientist cannot grow tired of asking and forming hypotheses,” he continued. “If there is a lack of knowledge, then it has to be said. If I don’t know something, I have a habit of clearly admitting it. In politicians, I see the tendency to give yes or no answers, everything is either black or white. In science there are so many more shades, which keeps scientists ceaselessly asking.”

We will see Karis juggling with many important questions for the next five years as Estonia’s President. Only this time, his laboratory will be the whole society.