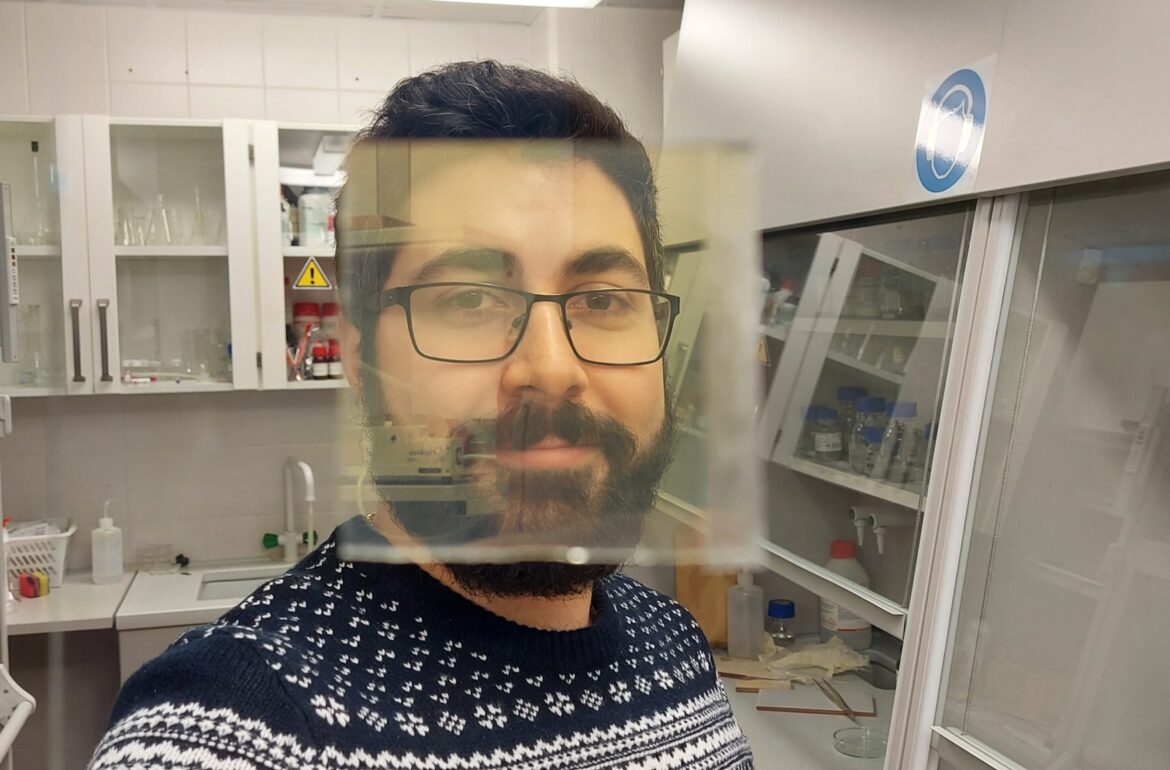 TalTech scientists are working on solar panels that are natural, light and work well in the northern climate.

Rising energy prices have pushed people to look for new sources of energy. For most of us, closing down our laptops for good and not heating homes throughout winter are out of the question. So, towering windmills along the coastline and solar panels are being lined up across fields and roofs.

But there has already been a fair amount of resistance to these new industrial structures. People protest against the noisy mills and the large and unsightly solar farms.

Could green energy production be more natural and… subtle?

Instead of designing new constructions, renewable energy scientists are looking for ways to make use of already existing ones, like windows.

In the Tallinn University of Technology, or Taltech for short, a group of scientists are developing the first prototype of a solar window glass that could convert sunlight into electricity for household or workplace use. This solution popped up in an unlikely place – in Northern Europe, Estonia, known for its world-class chemistry, but less so for its sunshine.

Actually, these solar panels, as Taltech scientist Nicolae Spalatu explained, perform well under the diffused light of cloudy weather. The scientists predict their smart solar window could work for 25 years in a cold climate.

“Nobody thought we could do this!” said Malle Krunks, an Estonian chemist and material scientist, one of the guiding minds behind the project. “But the results speak for themselves and people can start to believe in what we do.”

The solution is surprisingly simple: the team uses a cost-efficient technology of spraying various layers of organic and inorganic materials on heated glass. The keyword here is “green”.

Solar panels can be incredibly wasteful. They are often dumped in developing countries, the harmful metals used in them can leach out into the soil and end up in groundwater. Even though the EU requires solar panels to be recycled, most of them are manufactured in China.

The solar market is currently dominated by silicon photovoltaic cells, which are highly efficient (with more than 20% efficiency), have low costs and good reliability.

Taltech scientists decided to take it a step further and use a more environmentally friendly material: antimony trisulfide, a mineral found in nature that gives the glass its yellowish color. Their technology requires fewer materials and less energy for the overall cleaner production, both of which are priorities of the EU Green Deal.

Taltech scientists are now looking for the perfect balance between energy efficiency and the color of the solar window glass. The darker the glass, the more energy it can produce. Their glass has about 26% transparency and the cells have about 5.5% efficiency.

Under eight hours of daylight, a 20m2 glass could produce 2.4 kilowatts of energy per hour. This is up to half of the daily electricity consumption of a well-insulated house.

The solar windows have other advantages too: they help keep rooms cool during summertime and block the UV light to protect the furniture from bleaching. The group believes that a realistic estimated cost for the pre-fabricated solar window could be about 30-50% higher compared to the already applied filter window, Ilona Oja Açik, head of the laboratory and the project coordinator of the research group, explained.

If you can do it with windows…

The researchers believe the same cells they developed could be integrated into rooves, walls, and even roads. It could transform our cities into green energy-creating hubs that we have until now could only dream of! Or as Taltech scientist Spalatu puts it: “If it works on windows, it can be applied to many other materials.”

The PV material doesn’t add much extra weight to the glass.

The whole office building would only require about two bottles of powdered material. “This is on a completely different scale to what you’d normally see in solar panels,” said Matteo Chiesa, Taltech’s ERA Chair focusing on commercialisation of the smart windows.

The European Union, once a leader in the green energy sector, now heavily relies on China when it comes to the production of solar panels; in fact, more than 80 percent of the global production of photovoltaic cells is based in Asia. Besides being the biggest solar panel producing country, China also mines most of the antimony trisulfide.

Many European PV producers were bankrupted about a decade ago when they couldn’t compete with their aggressive Chinese rivals, who received subsidies from the government. Now, the EU is bringing the issue back to the table and aims to reevaluate its potential in the sector.

The Taltech scientists have the ambition to scale up the technology and bring it to the market, in Estonia and across the world.

The soil is fertile for it. Estonia performs well in innovation. It ranked 21st on the 2021 Global Innovation Index, better than that average EU country. In the energy sector, just like many other European countries, Estonia still has a long way to go though.

Meanwhile, Spalatu has created a global solar network with photovoltaic companies, scientists and policy-makers from over 35 countries. “Our aim is to convince society and Europe of the importance of solar energy,” Spalatu told Research in Estonia. “We want to show that photovoltaics matter and that it’s an important pillar of green energy transformation.”

More than half of the world’s population already agrees – solar, wind and renewable power should be the priority, as the world’s biggest survey on climate change “Peoples’ Climate Vote” indicates.