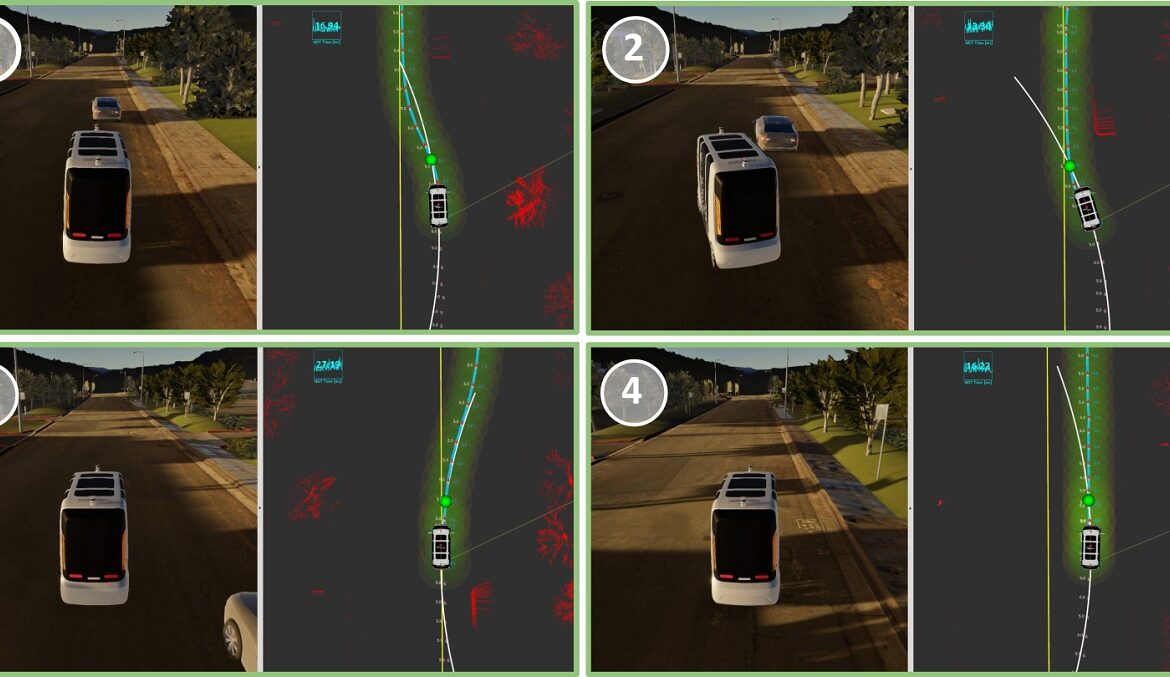 Although overtaking has been one of the most complex manoeuvres for self-driving cars, in which man still outperforms the machine, the research team of Tallinn University of Technology led by Raivo Sell has developed a new algorithm that will bring about a significant change.

In the article published in the Journal of Field Robotics, researchers describe simulations and real-life experiments confirming that the new algorithm makes the movement significantly smoother and more reliable in comparison to two standard methods, thus approaching the manoeuvre level of a skilled human driver.

As a result of the new algorithm, the overtaking movement of the self-driving car will become smoother, faster and safer, maintaining the necessary safety distance during the manoeuvre. Although a level comparable to that of a human driver will not be achieved as yet, the new algorithm is still an important practical improvement in the artificial intelligence capability of autonomous minibuses performing manoeuvres equivalent to those of human drivers.

Raivo Sell, head of Product Development and Robotics programme in the School of Engineering and Associate Professor of Tenure in TalTech stresses that the new method has already been tested on the famous iseAuto of TalTech and the results will soon be brought to a wider audience.

“As a result of this research, a successful collaboration with Aalto University research team is already underway, and we are applying the theoretical model of their machine learning to our practically self-driving vehicles, improving safety and adding an algorithm which aborts the overtaking if the latter is required for safety,” Sell adds. According to Sell, the research is a good example of practical cooperation between TalTech’s Autonomous Vehicle research group, the Smart City Centre of Excellence and Aalto University.

Self-driving vehicles, including autonomous minibuses, are expected to be introduced soon in many cities around the world. However, most of these projects are still in the experimental stage. The problem is that such machines meet the expectations of developers in strictly controlled environments, but cannot cope, for instance, in unexpected situations.

One of the main manoeuvres that is expected from self-driving cars is the avoidance of crashes with, for example, parked vehicles, by changing the lane. This may seem like a simple task for humans, but most of the Level 4 self-driving machines on the market have difficulty performing this task. Both manufacturers and relevant studies aim to improve vehicle safety together with reducing the number of accidents and the environmental impact of vehicles.

While the first generation of self-driving cars could only drive in very specific structured environments due to simple algorithms, it is now expected that the new Level 4 and Level 5 self-driving vehicles should be able to nearly match the basic skillset of human drivers.  This means that the self-driving algorithm must be able to support increasingly complex actions such as lane change, overtaking, response to unexpected natural phenomena, etc.

The algorithm of overtaking: a huge challenge

Various data show that around one tenth of accidents are in one way or another related to the lane change of vehicles. While this is a serious problem for human drivers, it presents an even greater challenge for the developers of self-driving cars.

The algorithms for overtaking require comprehensive information about the environment in all directions and in all situations, as well as complex calculations regarding both static and dynamic objects.

When developing the algorithm, other problematic factors must also be taken into account: for instance, different weather conditions, traffic situations and road quality, but also communication with other road users including cars, pedestrians and animals that may run in front of the vehicle.

In the article, Raivo Sell, head of the Autonomous Vehicle research group, and the group’s researchers Ehsan Malayjerdi, Mohsen Malayjerdi, Andres Udal and Mauro Bellone, highlight as one of their key findings that their new method allows self-driving cars to make decisions regarding overtaking and lane changing much faster than before. The method also helps to plan a safe route: using the data proven by test results it clearly shows which lane is safe. Both the human and machine interface that signals the intention to overtake have been improved in the new algorithm. It can be argued that this method allows the vehicle to perform a safe overtaking manoeuvre while creating a safe route that complies with all traffic rules. It is tested in simulation and afterwards implemented on a self-driving vehicle to confirm the safety and reliability of the method.

Read the scientific article in the Journal of Field Robotics.

This article was originally published by the Tallinn University of Technology.