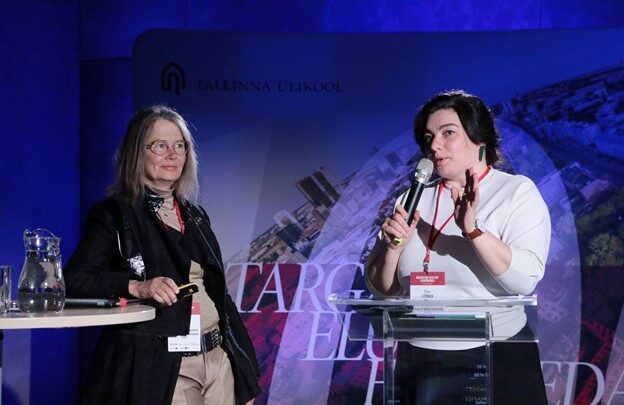 It’s a curious and yet common case in academia, that research and data gathering is carried out in silos. Investigations are undertaken within disciplines, but often those who would most benefit from collaboration do not talk to each other. Such has been the case in neuroscience, where film is studied, and in film studies, where neuroscience is referenced. A new conference organized by the Baltic Film, Media, and Arts School (BFM) in Tallinn has set out to smash that paradigm.

Called NeuroCine, the event was, to the best knowledge of its organizers, the first ever conference devoted specifically to the field of neurocinematics. It was held from May 16 to 18 at BFM’s campus at Tallinn University and offered a virtual format as well. More than 80 people attended the conference, either in person or online. The NeuroCine conference was supported by the European Grouping of Film and Television Schools (GEECT), the Baltic-American Freedom Foundation, and an EU Mobilitas Pluss Top Researcher project by Dr Pia Tikka, funded by the Estonian Research Council.

Tikka, a filmmaker and research professor, and Elen Lotman, a cinematographer and associate professor at BFM, organized the NeuroCine conference. They also lead together the BFM’s NeuroCine research group.

Lotman, in an interview held after the event, noted that one purpose of the conference was to get the neuroscience and film studies communities to talk to each other.

“I think everywhere in science nowadays, it tends to be clustered into highly expert groups who know what they are talking about, but nobody really knows about them,” said Lotman, who is also a director of her own films, and a cinematographer for several feature films, recently on the 2020 film Goodbye Soviet Union.

“After participating in a couple of conferences, I noticed that there are many neuroscientists who study the human brain and use film to study it, and those who study films, but who have never talked to a filmmaker,” Lotman said.

Indeed, one goal of the conference organizers is to expand research that involves film viewing beyond measuring the reactions of viewers, by using methods such as neuroimaging, and to capture the experience of the filmmakers themselves, not to mention screenwriters, editors, sound designers and others.

The keynote presentation was given by Uri Hasson, a professor in psychology and neuroscience at Princeton University’s Neuroscience Institute, who coined the term neurocinematics in 2008 and is well known in the field of neuroscience. Hasson’s work is focused on understanding how communication through storytelling can affect human cognition. His visit was supported by the Baltic-American Freedom Foundation.

The other keynote speaker was Aarhus University‘s professor Katrin Heiman, who is one of the leading experts in micro-phenomenology, a new interview and analysis technique for assessing subjective experiences. Heimann also gave a workshop with a focus on how micro-phenomenology could be used together with neuroimaging studies.

Among other prominent presenters were also Vittorio Gallese, a psychobiology professor at the University of Parma in Italy, well known for his role in the discovery of mirror neurons; Clare Grall, a postdoc at Dartmouth College’s Functional Imaging and Naturalistic Neuroscience Lab; Iiro Jääskeläinen, a professor of systems neuroscience at Aalto University; Joseph Magliano, a professor of educational psychology at Georgia State University; and Juha Salmitaival, a research fellow in neuroscience and biomedical engineering from Aalto University.

There were various topics discussed, including several focused on use of artificial intelligence (AI) in games and virtual reality cinema. Tikka gave the opening talk called “Neurocinematics: a window to narrative sense making.” The theme of making sense of and intuiting narratives was also at the heart of Hasson’s presentation, “How we share memories across brains using storytelling.”

Tikka maintained that studying filmmakers and the filmmaking process in addition to the more typical film viewer studies, could yield new insights into how narratives are constructed and how the narrative decisions affect how the films are understood.

“Our interest is to look at narratives, but from the perspective of the filmmakers and creative people,” said Tikka of her research interest. “We are facing challenges as to how to get hold of individual experiences, and we need to develop methods,” she added.

Indeed, the topics of story, how people create narratives, and even the biological reactions involved in how they empathize with characters on screen, were pervasive at NeuroCine.

The research in neurocinematics, so far, has shown that the human mind naturally creates narratives to make sense of the present and past, she said. “Our brain is a narrative machine,” said Lotman. “Narrative doesn’t come from art, narratives come from our brains and then turn into art.”

During the conference, Lotman gave a workshop on teaching neurocinematics to filmmakers. There were also a series of talks given by other filmmakers, which she said were of particular interest to participants from neuroscientific research.

“As a filmmaker, things might seem obvious or it might seem stupid to say things out, but for scientists, these presentations were extremely interesting,” she said. “For me, the highlight of this conference was when these two worlds converged,” Lotman continued.

This begs the question, will there be another NeuroCine conference? The answer at the moment is yes. Tikka said a second conference might take place sometime in early 2023, also in Tallinn. Some themes she is interested in exploring are how moral situations are introduced in narratives and how people respond to them.

Tikka, who has been working with international film productions and directed her own feature films Daughters of Yemanjá (1996) and Sand Bride (1998), is currently studying biosensor-driven enactive co-presence between humans and virtual characters in a narrative context. This could yield more topics for the second NeuroCine conference, Tikka envisions.

“The feedback was overwhelmingly positive to the content and interdisciplinary idea,” said Lotman. “It looks like we will have to do it again.”