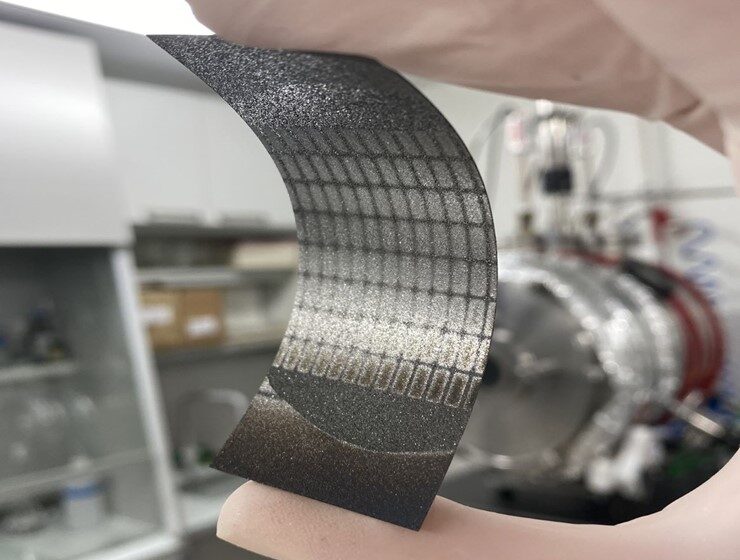 This shiny and flexible layer of crystals could be the future solar panel, but for the moon. Photo credit: Ants Vill
Share

It’s happening. NASA plans to send astronauts to the Moon in three years time. The European Space Agency ESA has similar plans for 13 years from now. Sooner or later, space scientists agree that there will be a more permanent base – and then bases, cities, industry and even countries! – on the Moon. It will serve as a pseudo-eighth continent that humans could explore and visit in the future. The plans are ambitious, however people in astronomy circles are incredibly excited about the prospect.

One of the central questions for a human settlement is where will the energy be harvested from. Eventually we will need to build before we can explore, but first and foremost simply surviving the uninhabitable atmosphere on the Moon is the priority. With no breathable oxygen and with a near-pure vacuum on the dusty and rocky surface, we would need something that would enable us to live on the Moon safely.

Solar panels have been considered one of the key solutions to this. The south pole of the Moon, around the Shackleton crater, is selected as a potential place for lunar settlements as it is almost always exposed to the Sun. It can get extremely hot in those areas with over 90 degrees Celsius.

For now, the main go-to technology for space solar panels are gallium arsenide solutions. They are extremely reliable, but would be very expensive to shoot up to the Moon. Every kilo sent to the Moon costs about a million euros at the moment. This price is expected to go down as the space traffic intensifies. Nevertheless, it makes more sense to make use of lunar resources, so that everything needed to produce energy would be taken from the Moon.

Fortunately, the Moon is predominantly formed of the same rocks as one could find on Earth.

Scientists around the world have been investigating the properties of pyrite, also known as fool’s gold for its colour, for at least a half a century. However, only TalTech‘s team is currently testing them for the lunar solar panels.

As a TalTech’s scientist, Taavi Raadik worked in the solar energy field for nearly two decades. He put together a team to experiment with pyrite in TalTech’s photovoltaic materials’ lab.

Pyrite is made of sulfur and iron, both of which exist on the lunar surface in various compositions, just waiting to be extracted. When treated correctly, shiny and semi-conductive crystals appear that could be used in solar cells.

The TalTech scientists use unique monograin layer technology, where pyrite crystals that are half the diameter of human hair are embedded into the thin layer of polymer and covered with a buffer layer. That way, each small crystal works as a tiny individual solar cell and the panel looks like sandpaper. It’s thin, flexible, and even semi-transparent.

This makes them perfect for curves and difficult surfaces.

It’s not just talk. The team built the first prototype and tested the material in the European Space Agency lab this spring and are now at the stage of improving the panel’s properties.

“One of the first questions we had was whether the panels would be able to withstand the space conditions,” Raadik said. His student Katriin Kristmann and her co-supervisor and researcher Mare Altosaar are testing and improving the material’s properties. According to their lab tests, the panels would stay intact, with a theoretical efficiency of 25 percent of the pyrite solar cell they would have a lot of potential too. ​​The best real-world silicon solar cells can achieve about the same efficiency.

Then why isn’t anyone else working on it?

Estonia’s advantage is that scientists can adapt fast according to the current needs, Raadik explained to Research in Estonia. “We don’t need to go through a long road of bureaucracy when an idea pops into our heads, but can go ahead and test our ideas. Our unique monograin layer solar cell gives us a huge advantage,” Raadik said.

“Our goal is that everything we need for the solar panel assembly would be available on the Moon,” Kristmann said. They are certain it would be possible.

The project is part of her PhD dissertation. Her other supervisor Advenit Makaya is an engineer at the European Space Agency.

Makaya believes this idea has the potential to be used on the Moon one day. The only real obstacle is convincing the decision-makers in the space agencies. “It’s a very conservative field,” Makaya explained. “It takes a long time to accept new solutions.”

While it appears to be a paradox for a field teeming with innovation, the reason is safety. “You want to exclude any risks, so there’s a heavy validation process for everything,” he said. With space, anything you send up there has to operate properly for 10 to 15 years. There is no way to repair the instruments later.

He believes Raadik’s and Kristmann’s work is more sustainable since the material is already there. “It’s original and potentially fulfilling our goals,” he added excitedly.

Raadik, too, believes in it. “Crazy ideas take us forward,” he told Research in Estonia. “I really believe in this. We will go to the Moon and make it a reality!”