Back
chemistry and molecular biologyNews

Scientists pull CO2 from the air to make fuel 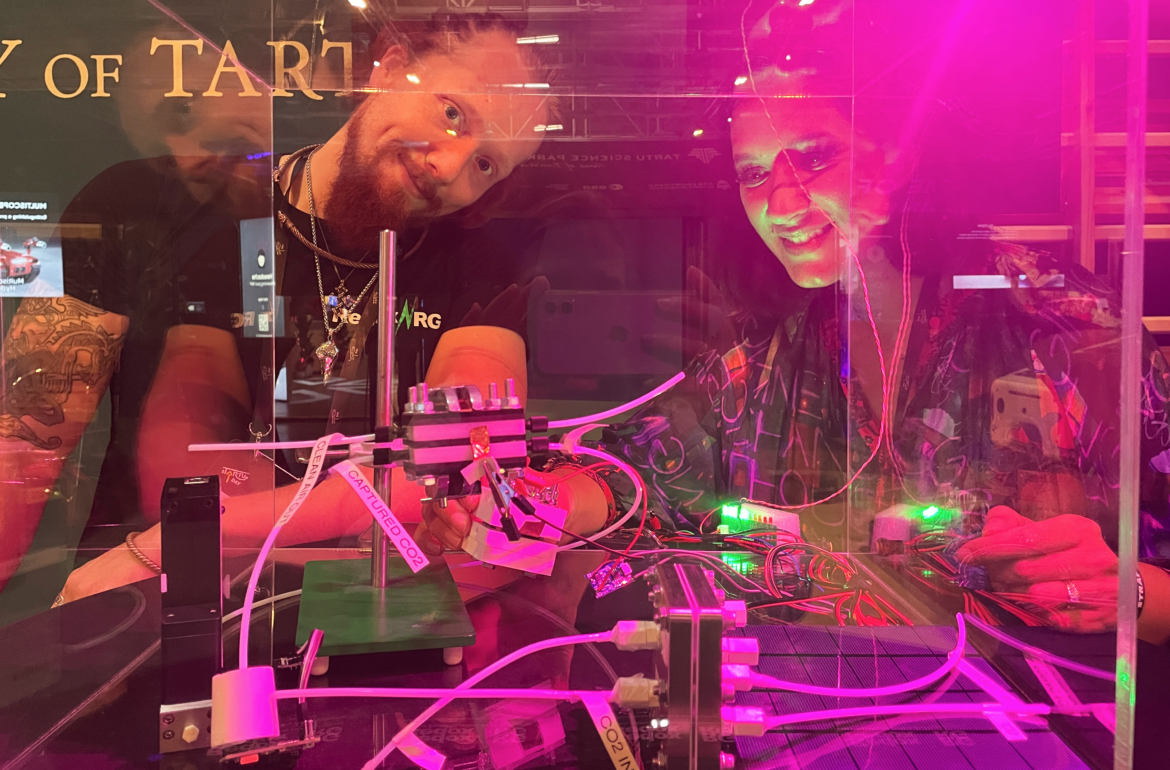 This little machine in a glass box can clean the air of bad gasses. Built by project manager Jürgen-Martin Assafrei (left), and the CEO and founder of RedoxNRG, Nadezda Kongi. Photo credit: Marian Männi
Share

This transparent box does what trees do, but more powerfully. And it’s just the beginning.

Imagine there was a solar-powered box in your home, garden, or even in the middle of the city that could extract all the bad air around you and convert it into something useful, like your car fuel or Coke bubbles. It’s sort of like a supertree!

University of Tartu scientists are building that machine. Why? Because we have failed to slow down our consumption and polluted our air. Trees alone are not enough. The average American would have to plant 640 trees every year to even out their consumption, not to mention the damage that’s already been done. There would be billions of trees every year. That’s not realistic.

Therefore, we need to learn how to build something more powerful.

Scientists have concluded that up to ten gigatons of carbon dioxide (CO2) need to be removed from the atmosphere by 2050 every year or the effects of climate change will become irreversible. Ten gigatons is a lot of gas – about a million football field-sized balloons packed with carbon dioxide particles.

This is the next big topic we will be hearing a lot about in the coming decades. In April, the American multinational oil and gas corporation ExxonMobil estimated the market for capturing carbon and storing it underground will be worth four trillion US dollars by 2050.

Scientists and companies are inventing different solutions. A Swiss company Climeworks operates the largest plant that extracts CO2 directly from the air. Using traditional sorbents, the company takes about 4000 tons of CO2 out of the air every year. It is then buried underground.

Burying it below the surface isn’t the most planet-friendly idea though. The gas could leak, and pumping it in takes energy. Besides, one plant is far from sufficient. A team of Estonian scientists built a prototype that not only extracts CO2 from the air but also turns it into a high-end chemical – formic acid, a colorless liquid with a strong odour that can be used to make fuel. Two years ago they registered a company RedoxNRG.

Most companies that capture CO2 use amine-based sorbents that attract the carbon dioxide molecules. The problem, however, is that a lot of energy is required to remove the CO2 from the sorbent.

“It’s not environmentally sustainable, because amine-based sorbents are highly toxic and its life cycle is shorter,” said the CEO and a co-founder of RedoxNRG Nadezda Kongi.

“Besides, we should be utilising carbon dioxide. Reusing captured CO2 and converting it to fuel is a great way to achieve a carbon-neutral cycle,” she added.

The University of Tartu scientists use a fully electrified reactor where the charged electrodes capture CO2 and are further converted to fuel by electrolysis.

The whole system can be powered by renewable energy which makes the process carbon neutral. The sorbents they use are non-toxic porous materials that can be exceptionally energy efficient.

Formic acid is coming to the picture

RedoxNRG uses about 300 kWh of renewable electricity to capture one tonne of CO₂. They can produce around one tonne of formic acid out of it.

Formic acid is a widely used raw material and potentially a great way to store energy. It’s considered one of the most promising large-scale hydrogen energy carriers because it can store large volumes of it. It’s also not toxic or flammable. This liquid can be used to produce energy, either directly in formic acid fuel cells or indirectly in hydrogen fuel cells. It could also be used in medicine or animal feeds for example. It keeps the food fresher for longer and fights bacteria, fungi, and mold. In the form of hydrogen, it could be converted into electricity to power our homes and cars.

“With our solution, the circuits close,” said the project manager Jürgen-Martin Assafrei. “We capture our own raw material and use it to create something new.”

If we were to use eight hours of sunlight every day for one year, we could convert three tonnes of CO2 with a 300-watt solar panel.

In short, four typical rooftop panels would just about clean up the carbon footprint a typical home would leave, using RedoxNRG’s solution.

Got started during a hackathon

RedoxNRG was established in January 2021 after winning the grand prize at Narva green-themed hackathon. The team used the prize money to buy the necessary equipment for preliminary testing.

They quickly went on to win more awards and gain further support, enabling them to improve their equipment. The University of Tartu’s Feasibility Fund grant helped them to create the first prototype.

Their CO2-capturing box is still small, the size of a microwave, but it’s proof of what’s to come in the near future.