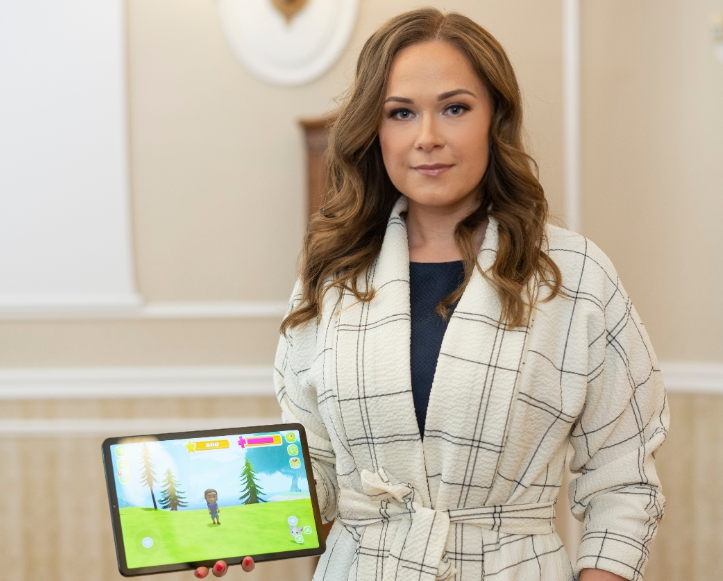 Technology enables the care for thousands of children rather than six per day according to psychologist Kadri Haljas.

A kid running around with a pet, helping others and saving the town from an evil monster. Playing Triumfland Saga‘s mobile game is not how most of us are accustomed to taking care of our mental state.

Yet this is the future of healthcare, where technology supports psychologists and other healthcare specialists, Estonian psychologist Kadri Haljas believes.

During her PhD studies at the University of Helsinki, Haljas started developing a mobile game that recently won recognition as the best health and wellbeing technology in the world by the World Summit Awards.

“After six years of working on Triumfland Saga, we still don’t have any real competition,” Haljas said. The uniqueness of her solution is that it’s wholly science-based and not just someone’s assumptions on what children need. “As we asked children what they need for their own well-being, the word “game” kept popping up. They wanted a game!” Haljas said. So that’s just what she and her team created.

Now her “patients” are running around in a virtual forest, answering their imaginary friend about how they feel and sleep, and they also get tips for a happy life and help others.

Does it work? This is the question Haljas constantly receives.

“When I was applying to work as a clinical psychologist, nobody asked me what my long-term impact is. They just wanted to know my methods and education,” Haljas said. She believes the expectations that are put on technology are unrealistic. “Just because we do it differently, it doesn’t mean our methods don’t have an effect,” Haljas said.

“Some of my patients would make long journeys to come and see me,” Haljas recalls her time at Viljandi Hospital. “Our session would start with the paperwork that took away time from substantial work. I couldn’t understand why all this couldn’t be automated and done beforehand?”

At the end of the session, psychologists often give children homework. It could be journaling, for example. In Haljas’ view, having a game as homework could be much more engaging for children.

The game’s impact was measured as part of her team member Riin Tark’s Master’s thesis. She asked nine pediatric cancer patients aged 7-12 years to take part in a 60-day intervention period with a suggested daily gameplay of ten minutes. Tark concluded that Triumf’s digital intervention in the form of a mobile health game could have a positive effect on the psychological well-being of the pediatric cancer patient population.

Haljas has written multiple, yet unpublished, academic articles on Triumfland, but in her view, the best indicator of the effect is the data that pours in from the users. The team can monitor thousands of children. The methods her team uses are recognized in clinical psychology, Haljas emphasises. The only difference is that it’s inside the game and not a counselling room.

For six years, Haljas has tried to convince other psychologists that technology could be helpful to them. Sometimes, it felt like banging her head against the wall, Haljas admitted.

“I had already accepted a long time ago that we are ahead of our time with this game,” she told Research in Estonia.

Mental health support is not accessible to everyone. The queues for psychologists are long or otherwise expensive. So the problems are piling up. “Children need something they can turn to regularly,” Haljas said.

In Triumfland, the player is given tips and tools to deal with difficult situations.

Triumland has a few thousand users; kids from Arabic countries, Ukraine, Malta, Finland and Sweden use it. At the moment, the company mainly relies on grants as a research institution.

In Triumfland Saga, the user gets the tools that could be used to build resilience.

“Many still believe that they come to the psychologist to be fixed,” Haljas said. “This is not how it works.” Instead, resilience has become the buzzword in the psychology field, while experts are looking for ways to fight the growing hopelessness lingering among youth. The feeling that no matter what one does, nothing will get better. To cope with that, children need tools. Children are not born resilient, they can be taught to be however, Haljas believes.

Mental health problems are growing worldwide. Especially amongst children. The World Health Organization has indicated that more than half of all mental illnesses begin during adolescence.

How could psychologists handle all this workload? In Haljas’ view, it is time technology came to the rescue.

“Our game offers an external motivation for children so they can take responsibility for their health,” Haljas said. It can give a troubled young person that integral initial support. “My goal is to create a real impact. Instead of six patients I could see a day as a psychologist, the technology allows me to potentially help millions of users,” Haljas said.

The pandemic brought a little more understanding of what we can accomplish with technology. Suddenly, patients started logging into video calls with their psychologists. Studies showed that they were just as effective.