Back
engineering and technologyexact sciencesnatural sciences 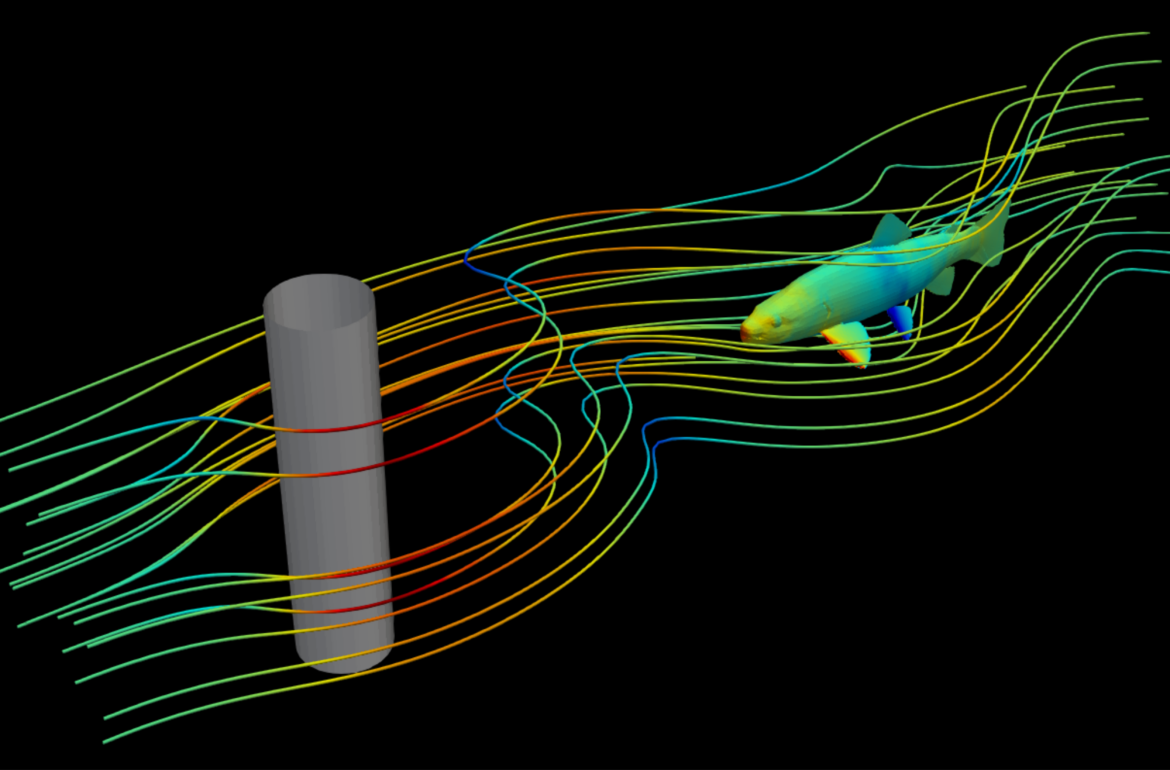 Freshwater biodiversity is rapidly declining worldwide, and nature-based solutions which increase the resilience of ecological communities are becoming increasingly important in helping communities prepare for the unavoidable effects of climate change.

TalTech robotics scientists, together with their colleagues from Lisbon, studied how fish adapt to rapid changes in the surrounding freshwater environment. To conduct the study, the researchers varied the water current and depth in a simulated river with obstacles, and found that fish were able to rapidly adapt to the changes when alone and also when in groups.

The results of the study are published in a prestigious scientific journal PLOS ONE in the article “Fish under pressure: Examining behavioural responses of Iberian barbel under simulated hydropeaking with instream structures”.

Researcher at TalTech Centre for Biorobotics and a co-author on the study Jeffrey Tuhtan said, “The findings suggest that cues initiated by obstacles in the flow can be detected by fish to find energetically-beneficial places in the flow even under extreme and rapid environmental change.”

The concept of observing fish in simulated rivers as individuals or in groups is not unusual, but the effects of rapid environmental variations, such as quickly changing water depths due to hydropower plant operations or a flash flood remain largely unknown.

One of the main objects of the research – barbel are a common fish species in many European rivers, and are usually found in rocky-bottomed and slow flowing rivers with plenty of dissolved oxygen. “These fish are an important indicator of ecosystem health in the Iberian peninsula and in many other European rivers. Hydropower operations and the uncertainty caused by climate change mean we need to begin to look at the compound effects of rapid changes, from ‘the fish’s perspective’,” a research biologist at the University of Lisbon and first author Maria Joao Costa said.

Fish sense their surroundings using the biological lateral line, which consists of canals and tiny hair-like structures which are sensitive to minute changes in the water motion and pressure near the fish’s body. This study was the first to combine biological observations of individuals and groups of fish with a new bioinspired sensing technology. The researchers observed that both individual fish and groups of fish reacted to the changing flow conditions in very clear ways and wondered if their natural flow sensing abilities were guiding their ability to cope with the stressors.

“It was exciting to compare the results of the artificial lateral line with actual observations of fish behavior. This was a very unique opportunity to combine sensor research with real-world biological observations, something which is rarely done,” said Juan Francisco Fuentes-Perez, a PhD candidate at TalTech and co-author.

“A fish’s sensing abilities have developed over millions of years and are incredibly advanced compared to what engineers have available. This is likely part of the reason they have survived for hundreds of millions of years” said Isabela Boavida, a senior researcher at the University of Lisbon and co-author. When developing nature-based solutions for improving resilience to climate change, it makes sense to look to fish and other ancient organisms who have proved their ability to survive throughout long history.

“Understanding how a fish’s advanced sensing system help them react to rapid changes in the flow environment will help scientists develop new designs for nature-based solutions to improve climate change resilience. With more than 500 million years of real-world experience, fish are likely to have learned a few tricks for quickly adapting to challenging conditions” said Prof. Antonio Pinheiro, co-author from the University of Lisbon.

The interdisciplinary research group included the TalTech Centre for Biorobotics, which has developed a bioinspired artificial lateral line sensor, and the research center CERIS – Civil Engineering Research and Innovation for Sustainability at University of Lisbon, where the experiments took place.

This Project has received funding from the European Union’s Horizon 2020 research and innovation programme under grant agreement No 727830, http://www.fithydro.eu/.  Jeffrey Tuhtan’s contribution has been funded in part by the Sihtasutus Eesti Teadusagentuur (ETAg) Estonia, through the projects “Bioinspired Ecohydraulic Sensor Array for Laboratory and Insitu Flow Measurements” (PUT1690) and “Octavo” (B53).